Exhaust Enchanted Bow: Fight. You must use either or instead of and get +1 skill value for this attack. This attack deals +1 damage. As an additional cost to initiate this ability, you may spend 1 charge to have this attack target a non-Elite enemy at a connecting location; if you do, ignore the aloof and retaliate keywords for this attack. 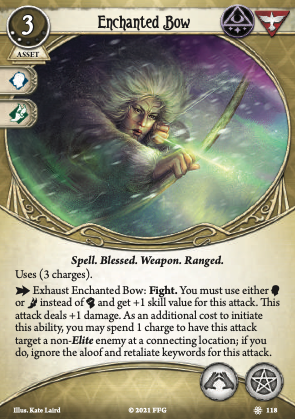 This is going to draw a lot of comparisons to the Ornate Bow for obvious reasons. They're two-handed weapons that use alternate stats to attack and have functionally unlimited ammo. The Ornate version is a very specific tool for a very specific style of play; you're spending a serious investment in cash and XP on a weapon that uses two actions to deal heavy damage with one accurate attack.

The Enchanted version is... not that. It's cheaper both in cash and XP, but also all around less useful. You get less bonus to hit, it deals less damage, it takes up more slots, and while you don't have to reload it, it exhausts to attack. And that last part is the real killer.

3 damage is the magic number. Many, many enemies have 3hp or less; 87 enemies have 3hp, compared to only 62 with 2hp. That means for the extra 30% enemies that you'll encounter, one shot will not kill it. And if you're packing a weapon that focuses on or , you almost certainly don't have the to just punch it for that last point of damage. You'll then be relying on a spell to actually kill it (as a mystic), or evading it (as a survivor). And you're filling up 3(!) valuable slots for a weapon that can't seal the deal, leaving survivors with no hands for any other weapons and requiring mystics to dedicate both of their arcane slots to combat spells.

Not only that, it loses out to the Ornate bow on DPS too. If you're fighting a boss and not engaged with it, the Ornate bow can fire, reload, and fire again, for 6 damage in a round; the same as any standard 2 damage weapon. It's awkward, but it works in a pinch. The Enchanted bow does 2 damage per round, full stop. The Ornate bow can benefit from Venturer and other reload abilities, the Enchanted cannot. Multiclass Guardians can't even use Vicious Blow to push it over the 3 damage sweet spot, because you cannot commit skill cards to tests without matching icons.

Okay, so you want to use it anyway, because it's cool. Who can make use of it?

Candidate #1, "Ashcan" Pete. Pete can discard cards to ready other cards, meaning he's the only character that can actually fire the bow twice in a round. 4 damage is sufficient to kill most things, and It also leaves Duke available to investigate, or squeeze in another 2 damage at a slightly lower bonus. A solid option.

Candidate #2, Rita Young. She's a very strong user for the Ornate bow, but if you aren't filling the primary monster hunter role, you might find $4 and 3xp too pricy for a weapon you won't use all that often. Her ability lets you use to squeak in that final point of damage, so you aren't up a creek against 3hp enemies. She can also evade first, use her free move to move to a connecting location, and spend a charge to fire backwards, ignoring Retaliate. Theoretically useful.

Candidate #3, any dedicated monster-hunting mystic that normally runs with Wither. Wither already requires you to double-fist combat spells by virtue of only doing one damage, and the bow slots in nicely at the 2xp median if you don't want to drop 4xp on the upgraded version. It can do an admirable job at stretching Shrivelling charges and is cost-comparable to other options, if you don't care about your hand slots.

Candidate #4, anyone crazy enough to build a character around hunting Aloof enemies. 3 uses of Marksmanship in a single asset that doubles as a weapon is actually pretty economical. Dunwich, Circle Undone and Innsmouth all benefit from being able to snipe aloof enemies, if you don't mind handicapping yourself for the remaining 80% of the campaign.

CombStranger · 144
If Rita evades, she ignores Retaliate. "Each time an investigator fails a skill test while attacking a --ready-- enemy with the retaliate keyword..." — MrGoldbee · 1148 10/9/21
Akachi could shoot twice with Spirit Speaker — Olider · 1 10/10/21
I think the Enchanted Bow is most practical with True Magick to get around it's many hand slot requirements. Otherwise, the weapon asks for way too many slots for way too little. As a bonus, it only exhausts True Magick and doesn't spend the charge on it, so you can use that charge for another spell. — suika · 8170 10/10/21
It would be pretty decent in a Luke Robinson deck that just wants to snipe enemies in adjacent locations as a supplement for his damage events. — suika · 8170 10/10/21
@Olider That’s super expensive though because you’d have to pay an action and three resources to replay it between attacks. — Death by Chocolate · 979 10/11/21
@Death by Chocolate Correct. With Robes of Endless Night and Prophetic it would be the action only. I just want it to work ;) — Olider · 1 10/12/21
What about an Investigator that can punch for the extra damage ? I'm playing double Quick Learner Stella with Granny. So I can virtually punch at 6 starting my 3rd action. Bow can be a good way to land a hit for the 2nd action. What about the fact you can hit on nearby locations ? Is that relevant ? Are there many 2hp hunters ? — Palefang · 56 10/13/21
Sniping enemies on adjacent locations is mainly useful to kill Acolytes and the Wizard of the Order. That can save you quite a lot of actions, however in most cases you will simply spawn those on locations you are planning to go to. — Killbray · 1143 11/25/21
I'll just add that I've used this in Calvin with great success. It uses whatever his highest stat is to attack (due to the way calvin's stats are calculated), and synergizes nicely with Prophetic which sits nicely in Calvin's card pool. — Tanz444 · 9 12/3/21