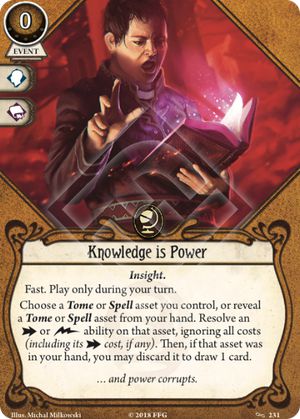 What a card, right?

I've played just a few times with it, using Norman Withers and it was absolutely fantastic. Saves an action and a charge in one go. The obvious scenario is of course to use a standard military-oriented spell (Daisy or Norman option) and be happy about the economy. But there's more. It's fast. Which means that you can do all those things while having an enemy on your back and not causing any attack of opportunity:

Having it in your hand, along with Mists of R'lyeh can save you some time and money too. In this situation you may decide not to setup at all and just rush your way through a scenario, until an enemy shows up.

Interaction with Blood Pact is also something fun to consider. This card then essentially becomes a better version of Steadfast

So what else to say? A fun card to play and plan around.

Onetribe · 226
I may be missing something, but what's the Blood Pact interaction? BP adds doom to itself, not a spell, so you don't get a free boost. — TheNameWasTaken · 3 6/15/19
Blood Pact is a Spell asset, so Knowledge is Power can be played to trigger its free trigger ability without paying its cost (and the doom is part of its cost). — Death by Chocolate · 712 6/16/19
Oh, that's what I missed. Thanks, makes sense now! — TheNameWasTaken · 3 6/16/19
How does this card interact with Lola Hayes' faction limitation? Her cards says she can only ' play, commit, or trigger abilities' of your class, but the wording on this card says to 'resolve' them. Can Lola in the role of Seeker play this card to activate spells/tomes of other factions? — Setzu · 250 8/27/19
3

AquaDrehz · 158
Yeah, getting 3 testless fast damage without using up any secrets from the Necronomicon is pretty busted — Zinjanthropus · 160 9/8/20
You say "busted" but without KiP/secrets manip/Tome bouncing Nekonomicon (the cat book) would be hard to justify 5 XP for me. — Yenreb · 9 9/8/20
Just use Sleight of Hand. Honestly, there are more ways to break Necro than there should be, to the point that it’s not even hard to do it by accident. — StyxTBeuford · 12423 9/8/20
Every seeker should take scavenging with versatile cause they can easily trigger it (thereby recyclying necrocomicon). — Django · 3448 9/9/20
1

How does this work together with cards that need multiple actions to activate like the new forbidden tomes?

iro · 4
I'm pretty sure that you don't need to spend any actions because the actions are part of the cost — Zinjanthropus · 160 9/15/20
I am also of the opinion that KiP should activate a use of either Forbidden Tome, but the is the argument that "an action of fast action ability" indicates only one arrow. That seems kind of stiingy, but "Grim Rule" and all.... — LivefromBenefitSt · 613 9/15/20
@LivefromBenefitSt Check the Reference guide for the different types of triggered abilities. Even if they cost multiple actions, they are still an ‘action triggered ability’ or ‘=> ability’(I can’t embed symbols in comments). So, KiP can activate the forbidden tome regardless of Hand Size. — Death by Chocolate · 712 9/15/20
That's good then, because it seems kind of cheap otherwise. — LivefromBenefitSt · 613 9/15/20
So, if you put a Forbidden tome on Abigail Foreman, you could trigger it twice with KiP and then Ms. Foreman's ability.... — LivefromBenefitSt · 613 9/17/20
0

Edit: Some Luke and Marie testing, also no need for the Lola shade.

This card is great.

At face level, this is not a bad level 0 card, you can get a bonus trigger from a combative spell like Shrivelling or clue spell like Rite of Seeking without paying any resources to put it in play or even spending an action. Pushing the limits to make 4 attacks in a turn is a great ability on it's own, well worth a card, but when you start upgrading cards and using this to key off-of them it becomes outrageously good.

The sneaky bit of goodness to this card is the ability to hit cards in your hand as well, you get a chance to oust yourself from scary situations by calling upon assets you havent got in play yet, this is especially useful at the start of a scenario or when the mythos deck is killing assets or resources.

It also gives you leeway to play with an overloaded slot ( characters tend to have an overabundance of Hand items, characters have trouble with Arcane slots). While your hands or Arcane slots are full you can snipe a card in your hand, possibly saving charges on something, whilst also refunding a potential dud draw.

The biggest issue with Knowledge is Power is it's class. It's a decidedly card that's printed yellow. Which limit's it's extreme power, which I guess is fair, if this card were it'd be a contributing factor to making Akachi Onyele and Agnes Baker the uncontested best characters in the game.

The standouts who get the most from Knowledge is Power are:

P.S. Daisy Walker, Rex Murphy and Finn Edwards can do some stunts too, but it's coming at the cost of precious slots or locked to triggering on 0 level spells, sure you can trigger it on a big book like Pnakotic Manuscripts but really, that card doesn't hold a candle to beasts like Shrivelling or Rite of Seeking.

Tsuruki23 · 1972
It’s early to say since Luke just came out, but this card does seem good for him since it’s an event. I believe he should be able to use it to make a spell attack an enemy at a connecting location. — ArkhamInvestigator · 247 10/7/19
Yeah the most interesting use for Luke I've found with these is using Mists of R'lyeh or Shrivelling from an adjacent location. You could also use it to directly attack an Aloof enemy adjacent to your location, as you would be playing this event as if the Aloof enemy is already engaged with you. In solo this isn't as useful as you might hope, but in multi I can see it doing a ton of work. — StyxTBeuford · 12423 10/7/19
Re: Daisy and Rex (or any other seeker) - getting an extra (and fast) charge off of Archaic Glyphs doesn’t seem either weak or niche to me. — Death by Chocolate · 712 10/7/19
Love the card, but have a Q: if I'm playing scenario 1 Norman and don't have a spell or tome yet, can I still play this off the top of my deck to just speed through the deck more quickly? It says to "choose/reveal a tome or spell..." but if I don't have those yet I'm hoping I can forget about that part of the card. — Krysmopompas · 158 4/3/20
I actually think activating the ability from Pnakotic Manuscripts from hand as a fast is pretty good (avoiding the costs that make the Manuscripts bad), but probably not good enough without janky deck-cycling shenanigans, I suppose — Zinjanthropus · 160 5/16/20
@Krysmopompas: No. "Choose" is the keyword falling under the "Target" header in the rulebook. If you don't have a valid target you cannot play the card. — Yenreb · 9 9/9/20
SMH, RTFC. The "or" makes it a yes. You can try and fail to do the latter option. — Yenreb · 9 9/9/20
That said, if you did have a Tome or Spell in hand you'd have to reveal one, and if it had any you'd have to resolve one of its [Action] or [Free] triggered abilities. Fortunately the discard is optional. — Yenreb · 9 9/9/20
Super confused about the last comments here. I don't see how "or" lets you play with card without a valid target. If you have neither target of the "choose" and neither target of the "reveal", how are you bypassing all that to play the card? — Time4Tiddy · 155 11/19/20