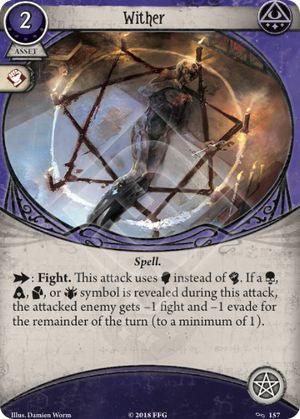 One of the worst cards in the game even before the Sword Cane was released. A mystic fighting with Wither is the equivalent of a Guardian fighting with a Kukri, except worse, since Wither only has a chance to make a second attack easier while Kukri guarantees it.

About the only positive things you can say is that it's a spell, so it can be tutored with Arcane Initiate, and that it gives Diana Stanley something to cancel with Eldritch Inspiration.

suika · 8155
There's a second upside: Wither(0) plus Arcane Research might save you 2 xp on Wither(4), which is actually a decent combat spell if you're worried about charges and have the right sort of chaos bag manipulation. Though, honestly, there are probably enough spells to upgrade whose level 0 version is actually worthwhile that putting up with Wither(0) in the first scenario is unnecessary... — Thatwasademo · 41 2/18/21
I don't consider that an upside because I don't think Wither (4) is a decent combat spell. If Wither (0) is a worse Kukri, Wither (4) is a worse Machete. — suika · 8155 2/18/21
Most 2+ damage spells with Twila are better. Also, Swordcane is similar and doesn't occupy an arcane slot. — Django · 3800 2/18/21
Something that people tend to overlook while examining this card is that this has quite a high "to-hit" bonus. Since the token effect triggers before success is determined, every spooky token effectively has its own modifier reduced by 1. Additionally the modification is independent of success or failure. This is quite good for odd health enemies as it's really cheap, and has none of the punishments of other spells--the 2 horror from shrivelling 5 _really_ adds up, there's a very strong argument that sword cane replaces this but it's not _totally_ dead — Sycopath · 1 2/19/21
Eh, I do think it’s totally dead. It’s upgrade isn’t worth considering as it’s incredibly overpriced for a niche effect. The level 0 version was ok for pinging damage at a decent hit rate, but Sword Cane does the same thing without taking up a slot where a good 2 damage spell could go. Sword Cane has all but eliminated Wither from consideration imo. — StyxTBeuford · 12593 2/19/21
Like suika says, Wither was poorly received on release and already very rarely played. Sword Cane is a much better card for numerous reasons and is quickly becoming an all star. — StyxTBeuford · 12593 2/19/21
Wither is a terrible card but Sword Cane exhausts. Azure Flame replaced Wither imo. Or perhaps even Spectral Razor since it can actually kill an enemy in one turn. With that being said I could see myself running Sword Cane to save Shrivelling or Azure Flame charges. I quite like that card. — TWWaterfalls · 781 2/20/21
It exhausts sure, but enemies either have even or odd health. The only time it’s worth saving a charge on Flame/Shrivelling/Armageddon is when you would be overshooting the health. At 2 damage per hit, that covers even health enemies already, and only one hit from SC is enough to cover any odd health enemy. You could do two hits of wither to save one charge, but the charge is worth less than the extra action you spent. I don’t think Wither is worth the arcane slot at all here. — StyxTBeuford · 12593 2/21/21
Soon the fact wither takes up an arcane slot will be seen as an advantage instead of a disadvantage. — Zerogrim · 224 8/16/21
Not to beat a dead horse, but this has to be objectively the worst way to handle enemies as a mystic. Pre-sword cane, I could see maybe a justification though I'd say there are tons of better options still. Post Sword cane its madness running it. I tried it for 2 campaigns and it was basically lose an action and 2 resources, do nothing. Sword cane has evade, which is a very handy thing while waiting for shrivelling and adds versatility. Unless you want to meme on a monster for your half-guardian to kill it wither is more harmful than useful. — Cazoodle · 350 10/2/21
0

So with the release of edge of the earth there is new life injected into old cards as ever and I am here to try in vein to prove every card has its place, now the place wither occupies is a niche one, but less niche with a spicy little hotness.

Well.... Wither is a Spell and that means it has nice place besides (one of my new favorite cards) Prophetic, it now can be played for free and can give a boost to attack, if you are running Prophetic anyway (you should, its amazingly powerful) then wither I think just out competes a lot of other side weapons you'd use to finish of enemies.

A 0 cost asset that is very easy to search out of your deck with other good mystic cards seems like it could easily pay for itself, in Dexter you likely won't even end up losing an action to play it, and if you are going Dragon Pole route it gives you a very cheap approach to filling your slot with an emergency method to attack.

ALL this said.... Brand of Cthugha is an absolute monster of a card, which also only costs 2...so maybe wither will never enter the spotlight and just warm the bench for the new brand, but it has a use that's worth exploring and considering.