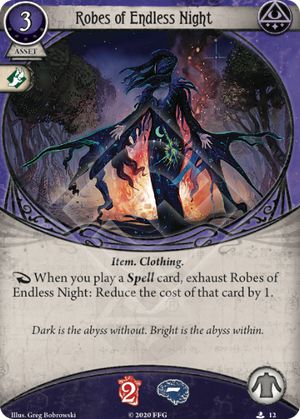 Finally, a body asset, and a quite strong one at that!

First off, damage soak can always be appreciated by a faction that tends to be low on the health side, but for that alone it's fairly expensive. On that merit, it's hard not to compare to Trench Coat, which costs the same, but provides a bonus that most Mystics will find useless. There's also Leather Coat, which provides the same protection for free, and synergizes with recursion (if that's even something to consider in a deck).

But the true strength of this card is in its economy. After three rounds of playing spells--which is just what Mystics do--you break even, and from then on you're in the black. As long as you play this early and you're on a good curve, that's better than a 0 cost card.

How does this compare to the mainstay economy card Uncage the Soul? Well, the discount here is plainly inferior (on a per-card basis at least), but Uncage has a major downside: it's bad for playing events. Most Spell events are either fast (meaning they either can't be uncaged because they have a prereq, or you're trading an action), or are used to Fight/Evade which is bad to "play a card" over. The Robes, on the other hand, are a nice clean . Even the lesser discount can be good, as there are a handful of spells that are too cheap to waste an Uncage on. And, so long as they don't get discarded, the Robes can be used way more than twice!

I think Uncage is still better for most assets (and it's got that nice ), but running the Robes with it sounds like a great way to almost guarantee a strong economy for a faction that typically likes expensive decks.

MiskatonicFrosh · 126
Yeah, I really like both versions of these robes, especially for making cheap spell events free. In a super spell-heavy deck, two copies of this are very very good. — SGPrometheus · 604 8/30/20
Nice review! I very much enjoy the health boost + having at least 1 unique mystic body slot. The saved economy is indeed where it shines, but the one downside you have to consider is that it exhausts. It is best in a deck with both spell assets and events because if it's nothing but events, you're going to be playing many events at full price. Having some charges on the table will help equalize that. Great card to have though. — LaRoix · 1529 8/31/20
This combos with Shining Trapezohedron, right? Reducing the Willpower test by 1? — LivefromBenefitSt · 843 9/5/20
That is correct! To get granular: the robes apply a modifier to the cost of the spell, which happens in step 1 of the initiation sequence. Then the trapezohedron would be used in step 2 when it's time to pay the cost. Good eye on that synergy! — MiskatonicFrosh · 126 9/5/20
I feel sad that I like the art but can't shake the feeling that it really belongs on a Dr. Strange card rather than in AH:TCG — LivefromBenefitSt · 843 9/14/20
This was a very solid card in my Parallel Agnes playthrough. Besides the needed extra health for more blood magic, it's the perfect compliment Storm of Spirits to make it free which is a must have for Parallel Agnes. — PuppyBrat · 1 2/15/21
0

Just a quick question. I was wondering if Robes makes something Sefinas Painted World copies cheaper regardless if it's a spell being copied or not? I think it does based on the q&a regarding Uncage the soul

JourneysintoArkham · 4
Yep, looks like. — SGPrometheus · 604 10/18/21
Specifically, Painted World is 'itself' when you are a selecting a card to play with Robes of Night. Once it is played, it is no longer a spell, the second you actually play it (before paying its costs), but that is ok because it was a valid target for the effect when this happened. This also means that you could in theory 'double dip' into another effect like say... Chuck, to make the card cost 3 less, and if you are feeling goofy make it DOUBLE FAST. — dezzmont · 92 10/19/21