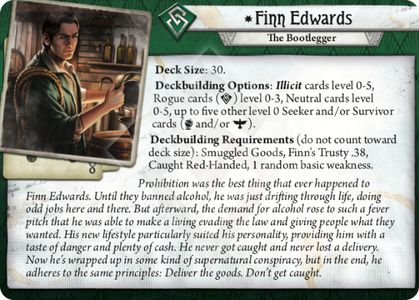 Deck Building
Search for cards usable by this investigator
Reviews
44

----If a wall of text doesn't appeal to you, then: TL:DR: Mitigate Finn Edwards's terrible by playing Peter Sylvestre and/or Logical Reasoning, his relatively high health and low-intensity weakness combine to make him tougher than he looks.---

Finn Edwards, this guy is so capable! Did you look at his of just a measly 1 and think "Nooo way José!"? Well take another look, you might be pleasantly surprised.

First off, this guy is the ultimate jack-of-all-trades, but he's still able to master one (or even two).

An of 4 lets him pull up clues very quickly. Although he can't quite deck out his clue gathering the way a can he can still bring cards like Lockpicks, Flashlight, Deduction and/or Dr. Milan Christopher to enhance his ability to pry up clues quickly.

You don't even need those other cards to tackle difficult locations if you just get Streetwise, a card that can really put Dr. Milan Christopher's extra cash to use. You really can build a powerful clue-specialist Finn Edwards by leveling into Lockpicks and/or Lola Santiago and with his access to weapons and he can protect himself while he's at it.

A of 3, like "Skids" O'Tooles, is only half-passable if you want to focus on combat, especially since you don't have access to Vicious Blow or Beat Cop. Even so, you still have access to all the weapons as well as the bow so that still means that you can do outright brutal attacks once in a while.

The "2+ above" archetype actually functions rather nicely for Finn Edwards, Daring Maneuver can trigger his effect as well as the triggers on .41 Derringer, Quick Thinking, Lockpicks and/or Switchblade and you can tie it all together with Fight or Flight to get that massive buff needed to reliably (and cheaply) trigger all those 2+ effects repeatedly in a big boss killing round (or to kill a mob of enemies, which tends to be a problem that evade-action-using investigators tend to face!).

If you want to lean into the combat role then you can level up into Lupara or even Chicago Typewriter. Remember to bring Hard Knocks if this is the route you wind up going.

An of 4 lets you do all the fun agility stuff "Skids" O'Toole and Wendy Adams can get up to. Finn Edwards can combine the trio of Streetwise, Waylay and Backstab to eradicate some threats, access to Peter Sylvestre makes tactics even more reliable and syncs well with the free evade per round, combine Backstab, Streetwise and Double or Nothing to deal a chunk of damage to a boss.

I highly recommend a powerful deck with Pickpocketing (levelup version only! the unlevelled one is crappy). Lockspicks are an obvious choice to gain a combined base investigate value of +8. Go ahead and try Eavesdrop but honestly that card was a big Miss for me, so many stars need to align for that card to deliver the goods. Dumb Luck is a standout card in my opinion for Finn Edwards specifically, he is sensitive to bad treacheries and this way you can essentially turn your free roundly evade into a one-turn buffer against the encounter deck. It's a bit like playing On the Hunt in a Roland Banks deck.

Whether you're chasing clues or hunting enemies the free evade each round means Pickpocketing and Manual Dexterity will always be useful.

So, that leaves us with the pitiful of 1. This number is LOW.

Most characters with such a low rely on Guts and Unexpected Courage and such to cover themselves and lessen the impact of all those "Take X horror" checks, but for Finn Edwards this is not an effective defense, especially on harder modes. A 2 character stands a reasonable chance to make a 3 difficulty check (Rotting Remains) by playing a Guts into it, and even if you get a -2 token you're still only taking 1 horror, Finn Edwards in the same spot is more likely to take 1+ damage than not, even with the committed skill cards.

So, at this point it is less important to try and make the check than it is to manage the damage, and for that we have some unexpectedly good options. Peter Sylvestre is a very efficient method to mitigate this weakness and he buffs your agility too. The other issue we might face is one card in particular, Frozen in Fear, to counteract this threat you can slot Logical Reasoning, even when Frozen in Fear isn't in play you can still use it to recover the damage you'll inevitably take, or, just use Adaptable to swap Logical Reasoning for something else when you know Frozen in Fear isn't a danger. It is a saving grace that Finn Edwards has a very respectable 7 sanity stat and his unique weakness doesn't force any on him.

So, ability wise this dude is very flexible, depending on your card choices you can build him as a cluehound or a fighter, whatever you decide to focus on you will very probably be evading a lot in the meantime. Even as a fighter you can play Pickpocketing and use your free roundly evade to generate resources. Don't forget that leaving unimportant enemies and locations undefeated and uninvestigated is often the best course of action, especially since you can evade them for free if you need to come back to them for some reason.

The ability is frustratingly unlikely to help much, as you probably know at this point the numerical + on these abilities is irrelevant (you never attempt a test if you cant succeed on a 0 anyway!), enemies who you've evaded refresh before the mythos phase so the one time where a free + would be useful (against tests!) the + wont be around anymore, the second half (the free clue!) is the useful element of this , it doesn't trigger often but when it does you'll be ever so glad.

Now for deck limitations. Take note that Finn Edwards doesn't have access to level 4+ cards, that means no Cheat Death and no The Gold Pocket Watch, no Suggestion and no Hot Streak, you have the unique ability to select any Illicit card which at the moment only means that you can still get Chicago Typewriter.

Out of faction you can grab some or cards, you can only pick five cards total so choose carefully.

From you can get Dr. Milan Christopher, Deduction, Shortcut, Logical Reasoning and/or Working a Hunch. In multiplayer especially it is important that you're able to pick up clues quickly and empty out 2-clue locations before you get bogged down in damage control. Logical Reasoning is worth special mention since this lone card is your only answer to Frozen in Fear.

From you can get Cherished Keepsake, Dig Deep, Peter Sylvestre, Scavenging, "Look what I found!", Winging It, Lucky!, Dumb Luck, Waylay, Fight or Flight and Survival Instinct. Obviously every card that interacts with your evasion synergizes with Finn Edwards's free evade actions but Peter Sylvestre and Fight or Flight are worth special mention, the former as a superb way to mitigate incoming horror and the latter to turn the inevitable horror you suffer into an incredible strength.

Edit: Also, heads up, Drawing Thin is not a terrible 1-of.

As for other cards? Backpack is worth a special mention since Finn Edwards gets two separate strength cards and both of them can be hit by Backpack's tutor effect. You can easily have six hand items (weapons, Flashlights and Lockpicks), you very likely have Emergency Cache and with the strengths that brings you to 10 Items/supplies not counting backpacks themselves, a perfectly reasonable number to try and tutor. If you want to play with Leo De Luca then Charisma might be a good early choice so you dont have to skip on Dr. Milan Christopher's extra funds or Peter Sylvestre's tank, there's also Lola Santiago who sindle handedly skyrockets your abilities in the clue and Evasion departments. There's always Ornate Bow but between 3 and every single weapon I dont think it's worth both hand slots.

Talking about strengths and weaknesses. Finn's Trusty .38 isn't a bad weapon at all, the engagement requirement can be a snag though so I highly recommend you supplement this thing with other weapons. Smuggled Goods lets you fish out the weapons you decide to go with, dont forget that this card may target either the discard or the deck, and if you pick the deck you'll get to shuffle it in and play it again later, this means that you can fish out your weapon of choice (or, interestingly, Pickpocketing) and then recurse it later.

Finally is perhaps one of the most lenient character weaknesses in the game, Caught Red-Handed. If you draw this card in the upkeep phase don't forget that they wont attack you yet, so you have plenty of time to evade whatever foe you might have attracted. Also, "Connecting location" means adjacent locations, so enemies wont start scooting towards you all over the map. Dont forget that the card doesn't go into the discard unless an enemy actually moves, if an enemy at your spot readies and engages you that still wont discard the card. The only real time this card really gets you in trouble is when you draw it during your round after evading something at your location, for example after you trigger a Pickpocketing. Perhaps the most unfortunate element of this weakness is the probability that it will cost you several card draws throughout a scenario since it wont be triggering hunter moves all that often, even if it hits you two or three times in a scenario it is still probably going to be less impactful then most other weaknesses in the game.

All in all, Finn Edwards is a powerful and flexible character, he sacrifices a particular defensive aspect but instead he's able to consistently contribute clues, neutralized threats and progress. Thanks to the fact that Finn Edwards's weakness is so manageable he can focus on mitigating the damage he takes from the encounter deck.

Tsuruki23 · 2348
I just read through all of this review, and it was very useful. Many aspects you address are good deckbuilding tips in general. — Lateralis · 6 10/23/18
I don't understand the limitation on his card pool. He would be better off if they justvlet him use level 0 to 5 rogue cards, instead of 0 to 3 rogue and 0 to 5 illicit. It's a handicap for no reason. I think it's absolutely ridiculous and poor design on the investigator. It makes no sense. — Durpstatus · 1 11/25/18
Well, this design choice is probably intended to push you away from Hot streak (4), in order to differentiate from money heavy decks. The flex cards are a powerful deckbuilding option and the statline is to die for, I'm guessing they thought he would be too strong. — Tsuruki23 · 2348 2/7/19
I initially thought that his Rogue restriction eliminated the Chicago Typewriter (4) big damage dealer but it is an Illicit card. The restriction is kind of strange since it only eliminates Hot Streak (4), Gold Pocket Watch, Cheat Death, Suggestion, DoubleDouble and All In for cards up to Circle Undone. I can't wait to play him since he looks like a fun character to play. — TWWaterfalls · 862 11/6/19
The more annoying thing than the limit to Rogue cards, at least to me, is that there really aren't many illicit cards that aren't already rogue cards. Maybe eventually we'll get some more and his deckbuilding will get more interesting. That being said L0 — Zinjanthropus · 212 4/23/20
That being said, L0 Survivor and Seeker cards are definitely a pretty powerful set of cards to dig into even if you only get 5 slots. — Zinjanthropus · 212 4/23/20
so its total of 5 slots for seker and survial - not 5 for each? may be silly to ask but im not that good in english — miraculix · 1 7/14/20
That would be fine total, since it says and /or — flooze · 5 9/20/20