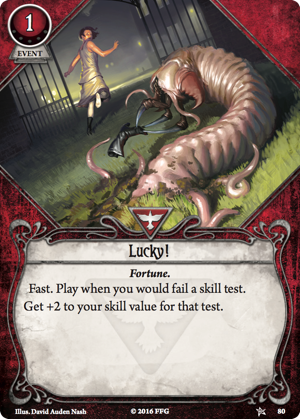 One of the best cards in the game right now in my opinion. Its closest analogy are the neutral skill cards that give 2 icons, but

Its almost as if you are playing it on every check, but can choose to take it back if it wasn't needed or wasn't enough.

It lets you go for much more marginal checks with more confidence. If you get lucky in real life, you keep it and can keep it until your real life luck runs out and you need to actually play it.

Lucky! is a superb card from an angle of flavour and universalism. A survivor's trait is escaping dangerous situations rather than appeasing them by force of arms.

Especially new investigators should note that this card has similiarities to other in-faction cards (Look what I found!, Oops!), but a fundamentally different mode of operation. Like the other above-mentioned cards, Lucky! is played after the chaos token is drawn from the bag, but unlike the others, Lucky modifies the value of the skill test, giving it a +2 bonus, hence turning the result from failure to success!

Let me give an example to make things clear: There is a location with a clue, a shroud value of 2 and an Obscuring Fog attached to it. You have a base value of 2 Intellect, there are no further modifiers and you draw a "0"-token for the skill test. You failed the test by 2 points.

Variant a. You play Look what I found! The skill test is still considered "failed", but you gain the clue from the location. The Obscuring Fog stays in place.

Variant b. You play Lucky! The skill test is modified by +2, you pass the test "successfully" and gain the clue. The Obscuring Fog is discarded.

Synisill · 767
I thought Lucky did combine with Look what I found! if you play it and were still failing the skill test? — HollowsHeart · 17 6/9/17
@HollowsHeart It does, if you play it to desperately get into the margin of "-2" to be enabled to play Look what i found. But that's a very suboptimal combo not worth mentioning! — Synisill · 767 6/9/17
I said this combo is not worth mentioning - i was wrong there! I tried expert mode since then, and whoooaH! there is *plenty* of need to play Lucky and Look what i found (in this order). Sorry i did you wrong there, Hollowheart! — Synisill · 767 10/1/17