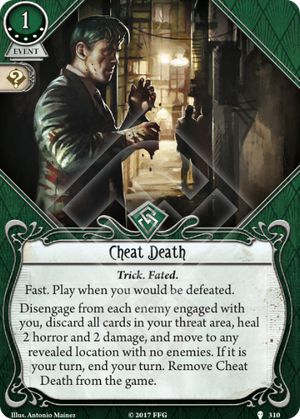 If i have St. Hubert's Key in play and would be defeated by horror, can i choose to use only this card, the key or both to heal up to 4 horror?

Death prevention cards are probably worth a look in any build in the endgame of a campaign.

This one comes with a hefty cost, but I think most Rogues would normally consider 1x of this card regardless.

I kind of like it better than similar cards, like I've Had Worse because it provides healing after you take the damage, it allows you to disengage AND move somewhere else.

It also has a few edge cases for Rogues outside of just combat too, but they are pretty rare.

Anyway, I would always consider 1 and probably never run 2. I also don't consider it mandatory with the Obol, but it is nice to have 1. Some might say it lessens the impact of the Obol, but I think most rogues would try to take 1 anyway... so it kind of mucks with the math a bit.

Myriad · 670
I feel like this card might look better than it really is. Don't get me wrong; I think this card is super cool. But thinking about usage cases, if you have 1 health/sanity left and take 3 damage/horror, it doesn't save you. Additionally, the forced move could actually be bad, or fizzle, which is annoying. I agree with maybe taking 1, and pairing with the Obol for synergy. — SGPrometheus · 188 3/27/18
Also it occurs to me that it discards Skids' weakness from play, as it discards all cards from your threat area and his weakness doesn't have a "cannot leave play" provision. — SGPrometheus · 188 3/27/18