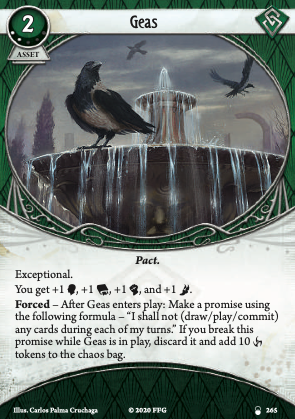 Usually I build decks focused on 1 or 2 skills so I'm not interested in having a bonus to all the 4 skills. Plus you now have to stop drawing / playing / committing.
But rogues have a few events that let you add up 2 skills (for example Slip Away) and now you have a +2 bonus which is quite nice ! And a +4 bonus to the basic action (considering that the average basic skill value is 3). For example Jenny Barnes investigates as a basic action with an intel value of 4 but if she plays Breaking and Entering she does with a value of 8, which means she probably can do without committing a skill.
An other interesting thing is that the Winifred Habbamock pack contains upgraded versions of the "2-skills events" that can return to your hand at the end of the turn (Cheap Shot, Slip Away) and so ensure you to get these great bonuses more than once per copy of the card.
Now, which investigators are the most interesting to play Geas with this in mind ?

"Skids" O'Toole has a 10 total skill value for the 3 non-willpower skills (compared to Finn's 11) but he has the advantage to be able to play Chuck Fergus and these events have the Trick trait ! Most of the time, Chuck will probably not be used for the +2 bonus but to make the event both fast and 2 resources cheaper which makes them free fast events played with a skill value of 9 (+ other passive bonuses) that can potentially return to your hand.

When checking cards containing "add your" to find events adding to skills I also found Ethereal Form, Read the Signs and Spectral Razor so we can look at the 2 rogue/mystic investigators: Sefina Rousseau and Dexter Drake. The first has already the possibility to play an event several times but she can achieve a really high value only with Read the Signs. The second one is likely built around assets.

Wendy Adams has access to this card and can also probably be played without committing cards thanks to her ability to re-draw chaos tokens (and so to try to achieve a less high skill value in the first time). She can play Cheap Shot and Slip Away with respectively a skill value of 7 and 9 and could also use Suggestion with a skill value of 10 in a deck trying to limit the amount of fights. She can also play On Your Own to decrease the cost of survivor events to keep the resources for the rogue ones.

Of course other rogues and Lola Hayes can also play it but I'm not trying to be exhaustive, only to describe which decks I'm the most interested in trying this card in.

And I have not discussed the 2 other possibilities (not drawing and not playing): not drawing seems limiting in case you end in a situation in which you need a card still in your draw pile, and not playing would require committing a lot (with I usually do in Minh Thi Phan's decks) and/or relying on your assets (so no munition, supply, key, ...).

AlexP · 175
I quite like this on Sefina, either choosing not to draw or commit depending on how set up she is. Sefina usually runs skill light (due to packing so many events) and draw light (due to her weakness), and can use Scroll of Secrets to "draw" without running afoul of the geas. — suika · 8292 3/31/21
You don't have to not draw/play/commit at all, right, just not during your turn? So you don't have to completely stop doing that stuff, just do it in other people's turns or other phases? That makes it a bit easier, I guess.. — bee123 · 24 3/31/21
Yeah, you can still do what you promised not to do as long as it's not your turn. Honestly this is maybe my favorite card from this pack. — SGPrometheus · 604 3/31/21
I really liked this in a Sefina blurse deck with Geas, Tristan, and Eye of the Djinn, with a bunch of the Mystic and Rogue stat adding events. Testing at like 8-13 stat value is nice for getting filtered draw from LCC (3), as well as not minding as much when you draw the curse tokens and get an extra action from the Djinn. Not sure how campaign-viable this deck is (was playing standalone), but I'm going to try it. — Zinjanthropus · 192 4/2/21
2

This card is super fun for Dexter, who can remove it from play without paying any of the negative effects. And most Dexter decks are overloaded with assets, so not committing cards during your turn doesn’t seem like a huge problem. At 4XP, it’s expensive, but slotless plus-one to every stat can be useful against diverse encounter decks like Innsmouth.

Promise to break the promise if you just want 10 curses:

If you want to keep it, the promise only matters on your turn.

This worked quite nicely in a Winifred Habbamock deck. I had a small suite of necessary assets: Lucky Cigarette Case, Lockpicks, Knuckleduster (no ammo limitations means you won't need to replay it later), Delilah O'Rourke (good outlet for excess resources), and Haste. The rest of the deck was skill cards, Swift Reflexes (can be played during another investigator's turn, as an extra action source, while writing this up I realized it does not give me the ability to play assets outside my turn so it might not be worth running), and of course Geas.

The play style was standard Winifred, commit lots of skills and draw lots of cards. Her draw is so strong, you'll cycle your deck before long, at which point you'll have drawn your critical assets and can play Geas. I wouldn't call Geas, critical by any means, but she benefits from all the boosts. She regularly uses Intellect, Strength, and Agility, and the boosts push her closer to over-succeeding. Furthermore, despite her low Willpower, she is still quite competitive on that front due to the mass of wild icons in her deck.

I was regularly pushing 5 action turns between Haste and Quick Thinking with the ability to over-succeed on each action. It's unclear how critical Geas was, but the extra insurance certainly didn't hurt. The biggest issue I ran into was sanity problems, despite the ability to succeed on most Willpower checks, the fact that I couldn't replay my ally for more sanity soak meant I trended dangerously due to the combination of unavoidable treacheries and deck cycling. If I were to run it again, I'd likely want someone else in the group with the ability to heal sanity.

madhatter152 · 5
Joey the rat suddenly has a use! he does not need to trigger during your turn and is not an action of any sort! — Zerogrim · 232 4/3/21
For soak, you could run Cheat Death if you have enough XP. Retroactively soaks 2 damage and 2 horror for 1 resource and no actions. I actually think the most annoying thing would be having to wait to get all of your other assets out before Geas, but it's not like it takes Wini that long to draw things. @Zerogrim: Geas doesn't actually care about whether something is an action or not, sadly. — Zinjanthropus · 192 4/3/21
o well, but you can still play cards during other peoples turns using Joey which is the main point! — Zerogrim · 232 4/4/21
That's a good point. I think doing things out of turn is one of the better ways to play around Geas — Zinjanthropus · 192 4/4/21
I don't think you can play fast assets on other people's turns, just fast events. Here's the snippet from the RR: "A fast asset may be played by an investigator during any player window on his or her turn." — SGPrometheus · 604 4/4/21
Joey the Rat doesn't make assets fast, he makes you play them as part of resolving a fast triggered ability with no timing restriction. — Thatwasademo · 42 4/4/21
(that's why he's relevant here and Fence isn't) — Thatwasademo · 42 4/4/21
(... well, aside from Fence apparently saying "during your turn" anyway) — Thatwasademo · 42 4/4/21
How does this card work with Dexters ability? Ita agree action to play a card so do you break promises? — Invisiblecam · 1 4/24/21
If you promised not to play a card, yes. — Death by Chocolate · 1021 9/25/21