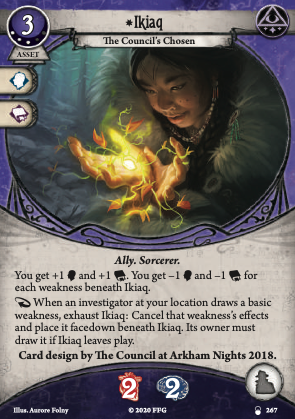 The static boosts are nice, particularly for the likes of Norman or Marie that can use the as well. But it's usually a waste to get Ikiaq just for the stat boosts, particularly since mystics have no shortage of good allies. You'd usually be better off getting Arcane Studies if you're particularly enamored of the two stats; it'll save you a Charisma as well. No, what you really want Ikiaq for is the ability to cancel basic weaknesses.

Mystics will rarely need to use Ikiaq's ability for themselves. With Deny Existence and the worst draw of all the classes, Mystics don't worry much about their own basic weakness. The draw that they do commonly use (Scroll of Secrets and Arcane Initiate) can't draw basic weaknesses either. Ikiaq is better for your friendly fast drawing rogue or seeker, who is likely to draw out their deck and see their weaknesses more than once. It's for a support mystic that's willing to give up their Ally slot and 6xp for the good of the team.

Y'know about all those degenerate rapid-cycling big hand seeker decks, and how the only thing holding them back is nasty basic weaknesses like Through the Gates or Amnesia? With Ikiaq, they'll have nothing to fear at last. The last barrier to true seeker supremacy is finally broken!

You'd think it would mitigate Doomed or Offer You Cannot Refuse, but in practice it doesn't do very well against those two as the "upgraded" forms are no longer basic weaknesses and can't be cancelled. All it takes is drawing them before Ikiaq is purchased or before she's played, and she'll be useless against them henceforth.

She also is much more useful in Standalone mode, where you have more weaknesses in your deck and haven't built your deck to mitigate those weaknesses.

suika · 8500
I have a confession to make. If I get a really terrible basic weakness that attacks the central strategy of my deck, like Doomed or Through the Gates in a cycling deck, I shamelessly redraw it. This makes Ikiaq quite a bit less necessary. Regardless, a cool card to have in the game and not overpowered in my opinion. The cost to do this is pretty significant and I think the decision to limit it to basic weaknesses was a good one. — CaiusDrewart · 2693 4/6/21
Sadly you cannot use Ikiaq against the Unbound Hound either. I wanted to build more Summoned Hound decks T_T — Zinjanthropus · 206 4/7/21
@ Caius: I wouldn't do that. But even if, "Through the Gates" is actually kind of a fun basic weakness in the queen of cycling. Kind of beneficial, if you draw it before "Shocking Discoveries". — Susumu · 211 4/7/21
Agreed that this is a card you take so that the seeker doesn’t draw Paranoia for the third time in a game. You may think it would be useful for humanoid enemy, but a slotless handcuff is a lot better. — MrGoldbee · 1234 4/7/21
Question: can you cancel a weakness, then another, then slot Ikiaq under Diana after you do this, and keep those weaknesses connected to Ikiaq? — Antiundead · 19 6/8/21
@Antiundead: The FAQ states that generally cards placed beneath other cards are "out of play". So the moment you place Ikiaq under Diana he leaves play and all the weaknesses you placed under him must be drawn by the respective owners. — Killbray · 3805 7/16/21
1

Step 1: Play Lola Hayes, focusing on and for enemy management.

Step 2: Play Ikiaq and let your team never worry about weaknesses ever again. Don’t have to worry about Crisis of Identity either!

This is the biggest Lola buff in the game prior to the new synergy cards in the Edge of the Earth expansion!