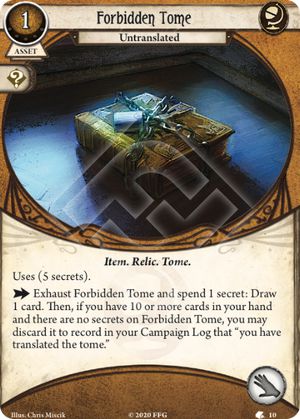 A fun and relatively simple side quest (appropriate to a starter desk), although 5 actions is a lot. Few Seekers are going to want to a third of 5 turns doing Draw actions to get a shot at an upgrade that will be useful only to Big Hand decks. Eldritch Sophist will helps you pull secrets off it, but that's a pretty thin combo.

More urgently, what happens if you do your last draw, have no secrets left, but don't have 10 cards in hand? Do you hang onto the tome until you hit 5 cards in hand? Have you missed your chance to translate it?

LivefromBenefitSt · 200
Pro tip: don't spend the last clue with fewer than 9 cards in your hand. Since spending the secret is part of the cost, you can't activate the tome later to translate it (outside of Eldritch Sophist/Astounding Revelation shenanigans). Woe betide the Seeker who pulls Amnesia. — SGPrometheus · 266 9/7/20
Sorry, that should be 10 cards in hand, but are you sure you can get stuck? — LivefromBenefitSt · 200 9/7/20
The pre-then aspect must resolve in order for the post-then aspect to resolve. Don't worry, you can move a secret onto the tome with Eldritch Sophist to get unstuck. — toastsushi · 62 9/7/20
Use Eldritch Sophist to move all but 1 secrets to a different asset. Only when you have 10+ cards in hand, activate this ability to solve it. — Django · 2885 9/7/20
I wonder if there's a build here where you don't care about translating it, and just use it as a source of secrets to reload Rook (or Pnakotic Manuscripts or whatever) with Eldritch Sophist — Zinjanthropus · 97 9/7/20
@zinjanthropus If you're putting in a "battery" card, why not use the level 0 Encyclopedia? Only 1 more resource, and it provides an effect you might actually use. — SGPrometheus · 266 9/7/20
Probably not a bad idea — Zinjanthropus · 97 9/7/20
If you want a battery, and have access to it, I suggest Forbidden Knowledge instead. Also, if you DO get stuck with this at 0 secrets, you can use Forbidden Knowledge to resolve its ability and bypass its cost! You were going to want KiP in your deck anyways to support its upgraded version, so may as well have it already. — Death by Chocolate · 508 9/8/20
Couldn't you just knowledge is power on this while it is in your hand and immediately resolve it? — Zerogrim · 15 9/26/20
Zerogrim. yes. it seems to me that if you have 11 cards in hand including knowledge is power and Forbidden tome you can "translate the tome" very easily — NarkasisBroon · 1 9/29/20
Zerogrim. Actually I thought about this a bit more. Abilities can't interact with cards in an out of play area unless the ability explicitly says it can. so the text on Forbidden Tome "You may discard it to record in your campaign log..." can't discard Forbidden Tome from your hand, because your hand is out of play. and because it can't discard it from your hand, it also can't "translate the tome" — NarkasisBroon · 1 9/29/20