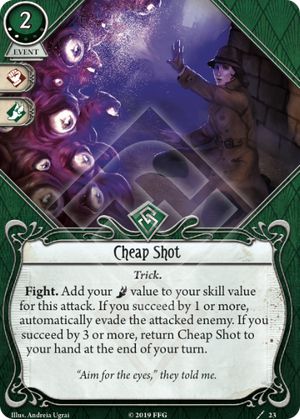 This finds an incredible home with Rita Young, particularly on standard difficulty.

By itself you get the utility of a nigh-guaranteed evade (8) that gives you the option to target low fight values when the evade gives you cause to sweat. For Rita that translates to 1 evade, 1 damage, +1 damage/1 free move. Solid efficiency and much stronger than her flat evade of 5.

With Crafty you're playing it for free and with pay-to-win capability. Boosting to 10 will reliably recur it on against most enemies, and can even safely recur while Drawing Thin against some.

And it even synergizes with Rita's pet quirky skill "Not without a fight!"! It doesn't work that way, sadly. Technically you are only doing a test with a bonus equal to your printed . So It just gets you to that 10 spot, still a good place to be.

Is it cost-effective at melting down big health enemies? Absolutely not (that's Sweeping Kick), but Rita's real strength lies in racking up damage and managing enemies turn-by-turn and trick-by-trick. Cheap Shot (2) is the bedrock of this dynamic, reliable evasion boosting with damage included at an absolute bargain in terms of XP.

Maseiken · 1
Cheap Shot is still a combat skill test only, so NWAF will only contribute its combat icons (see Lockpicks for more) — dscarpac · 74 5/21/22
Having looked into it - what an odd thing. I'm guessing 'instead' effects (like most spells) would still allow you to use the replacement attribute, even if 'add' ones don't let you use the secondary. In any case, it's still a good synergy, if not Crazy Good. — Maseiken · 1 5/21/22
Yup, if you're actually changing the skill used for the test then icons for the new skill and wild icons are matching icons, but icons for the old skill aren't (if you change it to something that isn't a skill like "resource", only wild icons are matching icons). If you're adding another skill then even though that counts bonuses to that skill from abilities, it doesn't make icons for the added skill matching icons. — Thatwasademo · 42 5/22/22
There are two major exceptions, but neither one is a player card effect. First, Circle actions, from one scenario in The Circle Undone, actually make you test multiple skills simultaneously, and all icons for any of those skills are considered matching icons. Second, there are a few treacheries that change the way skill icons work while resolving the skill test in their revelation effects, to encourage you to commit cards (they don't add other skill values though). — Thatwasademo · 42 5/22/22