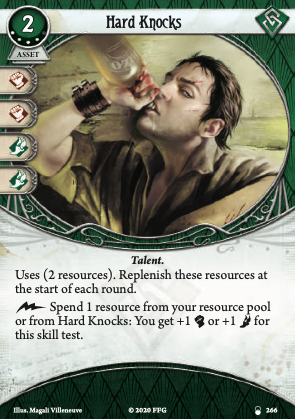 I'd have to provide an alternate view of this card, and endorse that it's actually a very good card in the right deck and investigator, which is a primary rogue fighter.

If you're playing Tony Morgan, one of the strongest investigators in the game, as your primary fighter then this card becomes invaluable, particularly as your first upgrade. +2 fist icon every turn (the resources on the card replenish each round) along with Tony's natural 5 fist icon means you're succeeding most fight skill checks. As rogue, if you're playing staple cards such as .41 Derringer, Lucky Cigarette Case, Quick Thinking, then the +2 fist icon is going to be important for you to trigger the conditions on those cards.

This card also synergizes well with Tony's signature cards Tony's .38 Long Colt and Bounty Contracts, since you're quickly generating more resources than you can use, so it's good to have a resource dump card like Hard Knocks to utilize your accummulated resources. Add to it the fact that the card is not unique and you can have two SLOTLESS copies of this card on the table at the same time means you can have a free +4 fist icon to any fight skill check you want PER TURN and more if you decide to pump your own resources into the card's ability.

Lastly, the card's ability to boost foot icon is nothing to sneeze at. Since Tony is at a measly 2 foot base (a rarity for rogue players), you can easily boost his low foot score with Hard Knocks to get him to pass his foot skillchecks for treacher cards such as Grasping Hands. Also, I added a pair of level 1 Lockpicks to my Tony Morgan deck, and I can boost Tony's foot icon with this card to ensure both success with the investigation as well as preventing the lockpick from losing a resource by succeeding by at least 2.

Solid card for the right investigator, a rogue who is a primary fighter.

Innsmouth Conspirator · 39
I think this card is wonderful at allowing Winnifred to flex, especially now with the release of thieves tools. Giving yourself +2 or even more gives her a great way to cycle money every round, and you can build a deck of nothing but things that intersect with that: guns that succeed by two and pay you, Gregory who wants you to succeed by x, quick thinking, Pickpocketing(2), watch this… suddenly, having a low combat bonus is Irrelevant. You turn the two free resources into money, and who wouldn’t wouldn’t like two free bucks a turn? If you’re building a rich deck that doesn’t necessarily need to hold to wealth, this card gives you FLOW. — MrGoldbee · 1314 9/7/22
I completely agree! — Innsmouth Conspirator · 39 9/7/22
All of the 4 XP recurring-credit assets are great, in the right decks. You have to plan around the deck space and XP cost (plus resource flow if you are starting with the lower-XP versions), but that's what we call deckbuilding, right? — LivefromBenefitSt · 937 9/9/22
My review is in direct response to the previous review from TheDoc37, where he concludes "I'd steer clear of this variation of Hard Knocks. The upgrades to this suite are meant to save you resources and make the card trigger more often as a result, but this is just the wrong class for this sort of an upgrade." His original position was that this upgrade was for the wrong class, and I offered a counter-position that it is a good Rogue class card for the right investigator such as Tony Morgan. Right? Right? — Innsmouth Conspirator · 39 9/18/22
1

Out of all the resource dump/pay-to-win playable assets in its suite of cards (Hyperawareness, Arcane Studies, etc.), I think this upgrade should see the least play for two reasons:

1.) Resource economy. I saw this mentioned in passing in a comment on a Hard Knocks (2) review, but wanted to more strongly state it here since level 4 would be more of a commitment and restricts it to mainline Rogues (watch there be some investigator that takes Talent assets up to Lvl 4 or something): Rogues have the easiest access to resources; don't underestimate that. Not just in class cards, but even in investigator abilities for some of them. If you're so strapped for resources that you need a resource discount on this card, as a Rogue, then you'd be better off investing in something that gives you more resources or a greater effect than just a +2 each turn. After all, you have 4 XP to burn.

Sidebar: Personally, I would even posit that Hard Knocks (2) isn't worth the purchase. It does have much more off-class potential, but so do a lot of resource-gain Rogue cards. The argument could be made that you're buying resource discounting in the same card slot with (2), and when it comes to off-class uses of pay-to-win cards, you can be using them for any number of reasons depending on the economy and card slots of your deck; I don't want to be stringent on that, but honestly I really don't think it's worth the XP in my opinion. Not as strong an opinion as for Hard Knocks (4), though, which brings me to....

2.) The price tag. Having replenishing skill buff every round is really nice, but as a Rogue, you have much better and much more EXPENSIVE XP buys than this to consider. The vast majority of Exceptional cards are Rogue cards, and only two of them (standard disclaimer: "as of this review") offer multiple versions for incremental upgrading, so you'll be needing to save and ration XP if you're interested in their purchases. Even apart from spending XP for resource gain, there are many other (sometimes pricey) cards that utilize resource hoarding/spending better than a Lvl 4 card that gives you 2 extra "resources" per round. XP budgeting is important in general, but especially as a mainline Rogue.

I'd steer clear of this variation of Hard Knocks. The upgrades to this suite are meant to save you resources and make the card trigger more often as a result, but this is just the wrong class for this sort of an upgrade.

TheDoc37 · 462
This is a fairly nice late deck purchase for dark horse Preston, but that's about it. — Zerogrim · 262 3/30/22
Probably a pick for skids with well prepared. — Tharzax · 1 3/30/22
I think the big thing holding back Hard Knocks is that even post-nerf, Streetwise (3) is just a very good card for flex rogues and this costs only 2 less than it for 1 copy. Pumping Intellect and Agility out of the gate allows rich rogues to essentially protect their entire team game start, and then solo cluever the entire game with a perfect ability to protect themselves and regroup with the team if need be mid game, while tanking bosses late game, all without playing a single card and at a premium exchange rate. This, combined with your point about the fact that effect of the upgrade is less valuable on rogue than perhaps any other class, keeps Hard Knocks (4) down. — dezzmont · 160 3/30/22
All the points above are valid, but I'd go further to say that fight + agility are probably the least complementary pairing of stats. You usually want one or the other, not both. I think even willpower plus agility could be better, although Hyperawareness is similarly difficult to justify. — DjMiniboss · 44 3/30/22
Its mostly only good for bosskilling yeah, though I could see a combat Finn wanting both for use with the .25 Automatic — dezzmont · 160 3/31/22
Too bad Finn can't take this card. — dscarpac · 91 3/31/22
Probably also a pick for sefina, who get it for two xp with down the rabbithole and which can help with the Rouge events which often use agility and the spectral razor or the brand. This combo could also take arcane studies(2) to have the option pushing all abilities. — Tharzax · 1 3/31/22