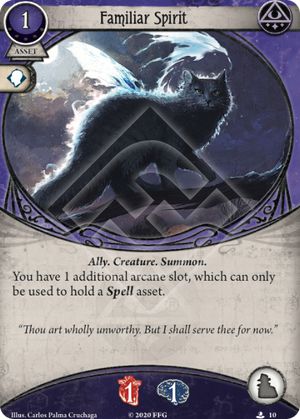 Another entry in the "Mystics turn all slots into Arcane slots," this is a cheap, fragile way to get an extra spell into your rig.

The Familiar is cheap, it plays into a low-resource deck that wants to pay for spells with Robes of Endless Night and Shining Trapezohedron. It is also Fragile, easy prey for Ally-sniping Treacheries or Location effects. It occupies the hotly-contested Ally slot, but a low-resource deck can get by without David Renfield, so maybe that slot became a little less contested. It might help keep a Sixth Sense or other spell available while your own Arcane slots are full of Mind's Eye.

LivefromBenefitSt · 604
I personally think this card is just terrible. Ally slots are way more contested than Arcane, and I would much sooner play Sign Magik over this (which I already rarely do). Initiate, Olive, and David are all just so much better. — StyxTBeuford · 12422 9/11/20
Imagine a Body Arcane skit, though. What would that be like? — LivefromBenefitSt · 604 9/11/20
Eh, probably still a fair step worse than Robe. The reality is that arcane slots are not really needed outside of very specific builds, like Seal. — StyxTBeuford · 12422 9/11/20
I don't know, I think this card is pretty awesome. It's a cheap way to get an extra arcane slot, which in multiplayer is incredibly useful if you're doing token sealing or you want something like mind's eye. It's cheap so I would actually play it in a deck with a bunch of expensive spells. It's also a little soak which is good for when you've spent all your charges. FS is not meant to sit on the table the whole game. Also, just get charisma if you want another ally. Mystics have good allies, but they still don't have THAT many to choose from that it isn't rare for me to be waiting for them to show up during a game. — LaRoix · 1434 9/12/20
I could see this working with two Protective Incantations. To me, that's a great card whose bigger drawback is the arcane slot rather than the resource upkeep. — Pinchers · 6 9/27/20
...and disregard my above comment. Protective Incantation is a ritual, not a spell. I just want to have a mystic who keeps two of them running without locking up the whole character... — Pinchers · 6 9/27/20
@Pinchers, Familiar still works well with Protective Incantation - you can just have the Protective Incantations take up your regular two arcane slots while your spell takes up the slot from Familiar Spirit. I like Protective Incantations in Carolyn as she typically has a lot of money to spare :). — iceysnowman · 149 9/27/20
I think the Familiar would combo well with Arcane Initiate. Play the Initiate early to dig for cards and then play the Familiar later to remove the Initiate from play and allow for an extra Arcane slot cheaply. This would require a build that wanted to use extra Arcane slots but I could see it being useful. — TWWaterfalls · 722 9/29/20
I think, it is useful for mystics, who have charged spells each for fight, investigate and evade. You don't need to have the cat hang around all game. Imagine, you have one or two chagres left on your Shrivelling, a full RoS in play and the Mists in hand. You can play now the Familiar and the Mists and, once the Shrivelling is empty use the soak. It's probably less important with the upgraded robe, which lets you play spells engaged without AoO, but it gives flexibility. Also, you could "convert" Charisma into an extra Arcane slot. But I would only do that with at least 3 different allies, in particular, if one of them is acumulating doom. — Susumu · 120 11/24/20