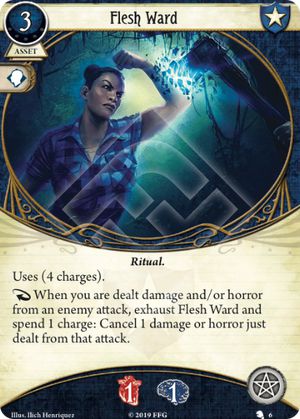 This card came out about a year early! Daniela has a power triggered by getting attacked, she’s on the card, and this makes those attacks much less troublesome. Now, you can use this with other “get hit“ cards that will come in her arsenal, put some damage on a guard dog and be a testless bruiser. It’s expensive, but it’ll save you actions against weak foes like rats, wisps, or witches.

Not going to lie, an arcane slot card was the last thing I expected from Nate Cho's deck. That being said, this is a strange card that probably has a better place in non-guardian decks, like maybe Akachi.

My problem with Flesh Ward is that for the same amount of resources, I could have just played Something Worth Fighting For which can not only soak horror in a big chunk, but can also do it for my allies and can soak it from Rotting Remains. Basically the floor on Flesh Ward is me taking a single whack of 3 horror from a non-attack, and either dying from it or assigning one of the horror to flesh ward, killing it without spending any charges.

On the other hand, the ceiling of it feels really unrealistic: I have to take four attacks from monsters that only deal one damage of one type, spread over four turns, and then I can take one of each from anything and kill Flesh Ward, mitigating a total of six damage/horror, which is pretty sick, but not at all realistic.

I think there's probably a use case for Flesh Ward as the thing to keep your sanity up while fighting monsters that do one damage AND one horror with their attacks, which there are plenty of in the game. You'll soak some attacks, and by the time Flesh Ward runs out your sanity and health are about even. Maybe you'll get lucky and completely cancel some attacks, and sometimes you'll eat two or more damage or horror and still get hit, but for 50% or 66% of normal, which is strong damage reduction.

The bottom line here is that if you can afford the investment and the time, Flesh Ward will outperform True Grit/Something Worth Fighting For. However, resources and time are in short supply in Arkham, and unless I'm playing Tommy I generally can't find the space for True Grit/Something Worth Fighting For, making me think the same will be true for Flesh Ward, except that because of how it works even Tommy doesn't want it. Maybe it is strong enough to justify its cost for someone like Roland, but I can't tell just from looking at it. I'm sure someone who can manipulate the cancel or the charges would like it a lot, but it looks pretty underwhelming for everyone else.

Update: played the basic Nathaniel deck and got this down very early. Initially, after taking a 2 horror treachery straight to the face, I was like, "I knew it!" But having it for basically the whole scenario did end up saving me 6 health/sanity. I think I end up liking it slightly more than SWFF or TG, but it is a bit selfish.

SGPrometheus · 635
There's a little bit of margin for Flesh Ward with some enemies that behave unusually and ready/attack in unusual circumstances, maybe? Like, it lets you ignore one Eztli Guardian a turn and they can be a big action sink if they have to be dealt with , and there's a couple of unique enemies that can ready unexpectedly in TCU but it does seem super super hard to use well.... — bee123 · 24 8/29/20
That's true; trolling Eztli Guardians is a really funny corner-case for this card. But no matter how erratically enemies behave, Flesh Ward exhausts to cancel the damage, making it impossible to use cleverly. I'm interested in what higher level versions might look like, that either don't exhaust or have larger mitigation, or just lower cost. — SGPrometheus · 635 8/29/20
Great for combo with Guard Dog and Survival Knife though — GWItheUltimate · 1 10/2/20
I've actually grown to really love this card with Mary. If you get it down early, it is an amazing shield that essentially doubles her life, which when combined with her super high sanity turns her into a pretty nice tank. Note that this is when I rely on the old .35 Winchester (taboo) for pretty consistent massive damage from her as well. — lockque · 1 11/20/20
This did feel a bit of a pessimistic review. If you’re a guardian and getting stuck in with monsters, engaging them to take the heat off the other investigators, then you can regularly take attacks (and it’s not being selfish!). Works well used like this with survival knife, riot whistle/taunt, guard dog, counterpunch. Surprised nobody has mentioned the flexibility it gives too... if you are in a high-horror scenario then use it to take the horror away... if you are in a high-damage scenario, then use it to stop the damage — Phoenixbadger · 177 2/22/21
This card would be much better in Innsmouth without the restriction of enemy attacks. Sure, it should not work on "Smoking Pipe" and the like, but it would be nice, if you could counter enemy engage effects with it. — Susumu · 206 6/4/21
Mark loves this card. — tasman · 1 12/10/21
Would this work with Diana? It cancels damage or horror which would trigger her draw a card gain a resource — JourneysintoArkham · 4 1/15/22
I don't see why it wouldnt work with Diana.... But problem is you need to put it under her investigator so you would lose this card. It's not a card you would expect to use up quickly either since it's 4 charges, 1/1 soak and exhausts on use. — fates · 15 5/14/22
I don't think it would work well with Mark. It cancels the damage taken so his ability wouldn't work with it. — fates · 15 5/14/22