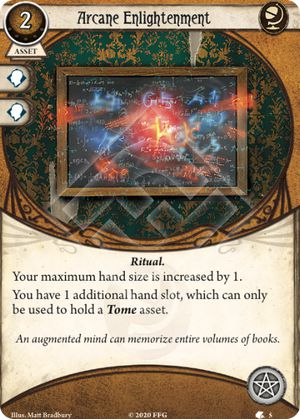 This card is due to come out in the new Harvey Walters starter deck, and it benefits him in two obvious ways. It increases his max hand size, which Harvey really likes, and it lets him tote around some of his premium tomes, while also brandishing a magnifying glass and some other seekerly asset. And if he doesn't happen to need it, the two will icons are handy.

But there's another investigator who'll like this card -- the brand new parallel Daisy. If you haven't checked out Daisy's trans-dimensional alter-ego yet, you should. She's a hoot. She starts weaker (1 Will, 7 Sanity), but gets rewarded for packing as many tomes as possible. +1 will and +1 sanity for each one she has in play. And two of Arcane Enlightenment, she can REALLY work that bonus. Two hand slots, plus two copies of Arcane Enlightenment, plus the tote bag, and she can have six tomes in play, for a Will of 7 and a Sanity of 13. Unfortunately, she'll have given up both arcane slots in the process, so you won't be able to use those insane numbers on Shrivelling.

What can Daisy do with all those tomes? Once per game as a free action, she can trigger an ability on each tome she has in play. If you do manage to get those six tomes into play, you'll unleash a bibliophilic bonanza that will have even Ace-in-the-Holing rogues in awe. That's the fun pay-off of Arcane Enlightenment.

Beyond Harvey and Parallel Daisy, I don't see this card getting much love, but maybe other Arkhamites feel differently? Maybe a bow-wielding Ursula would consider taking it, so she can rock some Pnakotic Manuscripts at the same time? Maybe regular Daisy has a use for it? I doubt it, given how little play the Tote Bag gets -- which gives you TWO extra tome slots for the same price. The measly bonus to max hand size, meanwhile, doesn't seem particularly interesting to anyone but Harvey. So, it has decent functionality for one investigator, and sets up some fireworks for another: at this point in the game's development, that seems like enough to justify a new card.

Mordenlordgrandison · 132
I could maybe see taking it in Bow Ursula in order to use Dream Diary. In terms of the hand-size bonus, there are a few investigators other than Harvey who can do some big hand shenanigans, but it's competing with Dream Enhancing Serum for the arcane slot, and DES probably enables more degeneracy than a mere +1 hand-size, even with the extra hand-slot. You could use 1 of each, though. — Zinjanthropus · 93 8/2/20
Yeah, my go-fast Ursula deck doesn't have the Bow but likes Dream Diary a lot, and having an extra hand slot free for a second camera or a bonus tome would be nice. — LivefromBenefitSt · 167 9/5/20