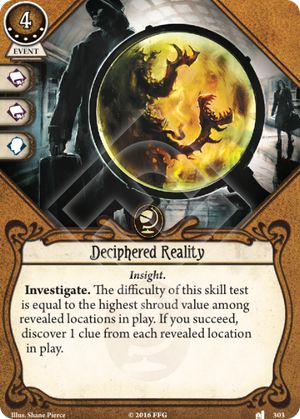 I've built a fair number of high-XP Seeker decks and I've never been that tempted to include Deciphered Reality. Oh, sure, the peak performance of this card is bonkers. In some scenarios you could arrange events so that you pick up nine clues in a single action. The rewards for a successful investigation are so high that combining it with Double or Nothing is actually worth actively pursuing (whereas most reviews' mentions of Double or Nothing are more like a fun thought experiment than a practical deck-building consideration).

But I'm not sold on it, and I think there's an important philosophical point we ought to unpack, there.

Arkham Horror CG decks should be built defensively. The consequences of succeeding a scenario are huge compared with failure - it could mean getting powerful allies, avoiding trauma and extra weaknesses, or even tipping the balance of success or failure for the entire campaign. By comparison, the difference between succeeding at a scenario and succeeding at it very well is typically an XP or two.

Therefore, cards that help you not fail are more important than cards that help you win harder. Deciphered Reality is a card of the latter type. You can only really bring out its full potential when you're in total control of your situation, where you can afford to have you and your other investigators spread out and exposing as many locations as possible to maximize the yield. If that's the position you're in, then you were probably going to win anyway.

Sure, in theory picking up a lot of clues at once can tip the balance between a win and a loss, but honestly? This is more clues than you need. Bear in mind that averaging one clue per investigator per round is extremely fast, and most scenarios will let you get away with half that pace, e.g. six rounds to pick up three clues per investigator. Massive clue-vacuuming plays are less important for a Seeker than just making sure that they, or someone else nearby, can keep enemies at bay so they can zip around the map and investigate at a steady pace.

If you don't specifically plan to use Deciphered Reality to make a huge play, then it may not even be worth using. It's not cheap at four resources, and there are relatively affordable cards to help you rapidly collect clues, like Archaic Glyphs: Guiding Stones and both variants of Deduction. Moreover, Pathfinder or a well placed upgraded Shortcut are great ways to cut down on the number of actions in a scenario, which is similar in practice to the payoff from Deciphered Reality, but they're cheaper and they're easy to use well.

On top of that, this card is just begging to be autofailed. If that happens, then you're practically guaranteed not to have time to pick up clues at all the VP locations that you deliberately didn't finish up, and could be at risk of failing the scenario itself. This game is meant to randomly generate huge setbacks. For the love of Yig, do not put all your eggs in one basket, like Deciphered Reality is baiting you to do!

sfarmstrong · 65
I would be very tempted to use it in solo play, as it might provide huge action compression. Unfortunately I do not like the seeker class that much. — XehutL · 45 9/11/18
How would solo play improve its action compression? — sfarmstrong · 65 9/11/18
I basically agree. But a few points. First, in one prominent scenario, which happens to be one of the hardest scenarios ever printed, all locations start revealed. Second, by the time you get this (which would be very, very late campaign), you can have significant protection from the autofail on your team, with the likes of Time Warp, Seal of the Elder Sign, that sort of thing. — CaiusDrewart · 1767 9/12/18
That aside, in most circumstances, I think this card is not worth it. You'd basically have to know in advance that the upcoming scenario is going to be conducive to it. — CaiusDrewart · 1767 9/12/18
Basically, yeah. Even with Seal of the Elder Sign, this combo would be a complete bastard to set up, but has some potential upsides if you know scenario details ahead of time. I haven't replayed enough scenarios to have a feel for how that kind of foreknowledge affects deck-building. — sfarmstrong · 65 9/12/18
I meant not improved by solo play but fact that with several scenarios it might provide huge acceleration with the right setup/play. It still can be ruined by tentacles, of course. — XehutL · 45 9/12/18
We tried this card in several scenarios in 4 Player but is was never worth it. Alone the time it took to reveal all locations... guiding stones and in the know is much easier to use. — Django · 2631 9/12/18
This card is crazy in Dim Carcosa though. — Razoupaf · 1 10/1/18
Might work well in a Minh Barricade deck. — Zinjanthropus · 16 2/22/20
2

This card has excellent synergy with Ursula Downs. Given that she’ll be moving around quite a bit to maximize use of her ability and investing in mobility upgrades like Pathfinder and Shortcut to further capitalise on that, it’s very plausible she’ll be scampering across the map at lightspeed, handily opening up locations left and right.

Getting this card is a further extension of that play style; finding one of these copies at or near the start of the game means that you can afford to keep moving off from high shroud or otherwise troublesome locations like Circuitous Trail or Serpent's Haven instead of staying to empty them normally and paying through the nose as a result. You can then play this card to grab the breadcrumb trail of clues you’ve left behind, sweeping off the last remaining clue or two off a whole bunch of locations at once, and minimizing the number of tests you need to make as well.

Jarell88 · 8
Always though about this card in multiplayer, but your point will make me rethink it even in solo. But that rethinking will be heavy though, since a use case for this card is like once a campaign maybe, if I'm unlucky enough to fail multiple investigations along the way (1 clue locations) and lucky enough to start a secenario with that in hands. — Onetribe · 204 12/17/18
Ursula also can take Grotesque Statue, which can prevent an autofail. — Zinjanthropus · 16 4/20/20
1

SPOILER ALERT: Very minor spoilers for The Path to Carcosa.

I've played Deciphered Reality now in what is often considered the optimal deck for it, a Rex Murphy deck in a Carcosa campaign. I purchased the card early, and two copies of it, specifically to see if it would see any use prior to the last scenario. Unfortunately, it didn't get played even a single time. It didn't even get committed for the skill icons, as I was often better off keeping it in my hand instead, and using resources to fuel Higher Education.

The unfortunate thing for this card is it relies on several things:

All of the above being said, in the final scenario of Carcosa, I did use one of the copies to scoop up eight clues. But, because of the nature of that scenario, it's better to focus on collecting all the clues from a single location.

Verdict? I feel I wouldn't buy this card again.

cb42 · 23
I’m not saying you shouldn’t go for Archaic Glyphs + Higher Education, but running that in the same deck as Deciphered Reality is just asking for anti-synergy since DR relies on you leaving a clue behind on each location as you explore the map. Compared to the combo, DR requires three other locations with a clue (plus your current with two) to get the same value for 4 resources. Again, I’m not disagreeing with your conclusions, but I think DR requires a deck built around it and not against it. — Death by Chocolate · 14 1/22/19
Yeah, this isnt really a card that works well with Rex; Rex prefers a play style where he empties a location of clues completely with his ID one at a time before moving on to the next. As per my review above, this has better synergy with investigators that favor mobility over staying to grab clues. In an Ursula run, for example, she’s not gonna be blowing all her resources to overpay for Rex’s ID, she’s going to be hypermobile, and if she starts with this in hand or a way to pull it, she can deliberately leave said singleton clues behind. This isnt a card that just fits into any deck, but when it shows up in the hand of someone who has a mobile investigator early, it can reap immense dividends with the right playstyle. — Jarell88 · 8 1/25/19