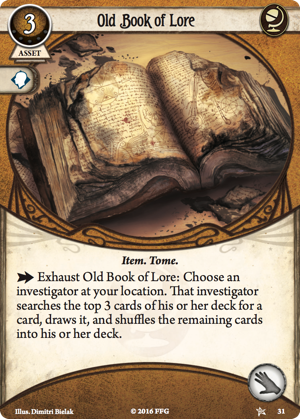 Just finished our first game, and this was a standout card in my deck. Daisy Walker gets a free action to use tomes, so this is a free card draw every turn (doubling your basic rate of drawing) and it's filtered, meaning you won't ever draw a Weakness at the wrong moment on your turn. Plus, of course, it turns on her ability.

A fringe benefit is that it gives a shuffle (not sure how useful this will ultimately be, but gives a nice combo with cards like scrying to shuffle your deck if you don't like 2 of the 3 you see), and also note that it isn't unique. Sure, I can't often see having two, as there are likely more crucial tomes to take (especially over time as we get new cards), but extra card draw for your colleague could be nice.

I mean... what's not to love? I can't ever see Daisy not running 2 of these, and in fact I'm going to be packing Research Librarian as a two of to get it to my hand as quick as possible.

Bloodw4ke · 24
I think this card is still pretty expensive, even with mandys ability, especially spending an action each turn (or 2 on the first to get anything back). Another point is the 1/turn limit on mandys ability. In multi or if you include many search cards, it's not as useful if her ability was already triggered. — Django · 2788 11/7/19
I've not played Mandy so might be getting it wrong, but does she effectively make this card 1 Action to draw 2 cards? Either that or an infinite "No Stone Unturned"? On its own that doesn't seem shabby at all, but I don't know how that would play with a deck stacked with search already. — Octo · 62 11/7/19
I agree with @Django. Once I had Rook in play, the book became basicially obsolete. However, I could see it in a supportive Mandy build because unlike Rook it can be used on other investigators. — Warforce17 · 530 11/14/19
1

Just to underline how powerful this card is in a Daisy Walker deck. There is an interesting note on how card draw and randomized decks work.

Old Book of Lore has a really funny interaction here. Whenever you shuffle your deck you refresh each cards randomized location, so long as you shuffle every turn the cards will have a new randomized location every turn! This has the effect of changing when you draw your weakness from "100% once you've drawn 4 cards" to "100% so long as the Weakness is the topmost card after a shuffle."

TL:DR. So long as you use Old Book of Lore every turn, the chance to draw a weakness is literally "1 in however many cards are in your deck". The only Weaknesses will be those that you're unlucky enough to top-deck after a shuffle.

I.E, Daisy Walker is very unlikely to draw her weaknesses with this card in play.

BTW the same is true for Eureka! and No Stone Unturned but neither of those can minimize weakness odds indefinitely..

Tsuruki23 · 1171
Hate to say it, but this analysis is wrong. You're confusing probability with expectation. While it's true that a deck's draw-order is set only when it's shuffled or reshuffled, and the probability of your card draws is technically set in stone in-between, that has no bearing whatsoever on the EXPECTED probability of drawing a specific card. Your chance of drawing a specific weakness is 1/n each time you draw. When you reshuffle the deck, the next time you draw a card your expected probability of drawing that card is also 1/n. Reshuffling to move the weakness away from the top of your deck is just fine, but just as often a reshuffle will move that weakness from the bottom of the deck to somewhere nearby. — sfarmstrong · 69 9/6/18
(Obviously, the distinction between probability and expectation is actually meaningful when you actually have information about the order of your deck, such as with Scrying. In that case, a reshuffle ability could actually be very useful, although effects that let you discard cards off the top of your deck would be even better, at least for avoiding weaknesses.) — sfarmstrong · 69 9/6/18
Scrying + yaotl to discard weaknesses? — Django · 2788 9/6/18
Or Alyssa Graham + Yaotl! Only possible for the moment with Ashcan Pete, not a fantastic play. — mogwen · 203 9/6/18
You could also manage it by discarding Key of Ys, which is an even worse play! I'm not actually saying that discarding the top card is practical with the current card mix, so much as I'm saying that I'd probably WANT that ability if I were serious about using lookahead abilities to their full advantage. — sfarmstrong · 69 9/6/18
The Alyssa Graham + Yaotl combo is alsi available for Agnes, but what would she want those allies for except for the combo itself?? — matt88 · 1844 9/8/18
The combo is usefull for Lola. — Django · 2788 9/9/18
The combo is harder to use in Lola since it requires switching from Mystic to Survivor (so every other turn) and interferes with which other cards you can use. I think you’re much better with Marie or Agnes using Scrying every 3 rounds or so and Yaotl as needed, and probably only if you have really nasty weaknesses in your deck. — Death by Chocolate · 371 1/23/19