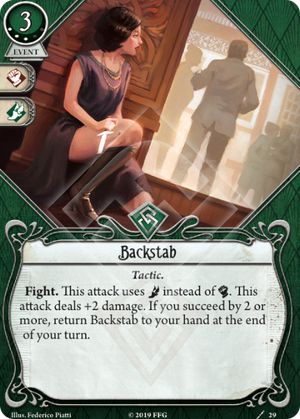 By itself, this is a TERRIBLE waste of 3 XP. no discount or bonus damage and on any average result you wont be picking the card back up at all.

And last. but probably most importantly:

And there it is, I daresay I dont need to talk much more about why this might be a cool upgrade. Play it in a deck with other stuff that rewards you for overcommitting (Lucky Cigarette Case) and to generate Chuck value grab a heap of other Trick or tactic cards, Cheap Shot and Slip Away are obvious complements.

Nearly every can build a deck where this thing shines, only Finn Edwards (who cannot take Chuck Fergus) and Tony Morgan (with his low agility) aren't interested.

My biggest counterpoint to use Backstab is the existence of Ornate Bow, which itself is basically a Backstab on tap, but I guess you might come to the conclusion that they complement one another or that, once fully set up, a Chuck engine is WAY faster then the action intense bow.

Tsuruki23 · 2119
I think the biggest issue with this card is that you need to have an amazing economy to play it over and over. The biggest issue with Ornate Bow for Rogues is that it prevents them using one of the strongest cards in the Rogue cardpool (Lockpicks). L3 Backstab frees up their hands but it will get so expensive. The other problem with Backstab in general is that it doesn't include a combat boost for the test. If you need to use it early before you have assets in play then it might be hard to pass as a 4. But Chuck Fergus is amazing with this. A deck built around looks like so much fun to play. — TWWaterfalls · 781 11/6/20
Yeah, this card got _way_ undertuned by the designers (probably because they didn't want it to be OP with Chuck). It's completely not worth the XP in most cases. They could have at least given it an extra icon or something. Compare to I've Got A Plan (2), and be annoyed. — Zinjanthropus · 185 11/10/20