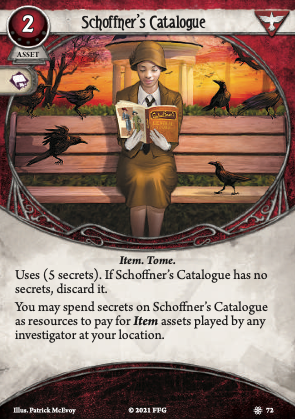 Schoffner's Catalogue isn't a good card on its own. The reason is obvious; having to pay 2 resources, a card and a play action for 5 resources is a lousy deal. Yes, you can pay for other investigators' stuff, but the item assets-only clause is a severe limitation in a game with events, spells, allies and whatsnot. Also note that most investigators tend to play their items early-to-mid game, making Schoffner's Catalogue less relevant as the rounds pass by.

Still, it's a good card for a few investigators:

All in all, a niche card that works well for Bob and possibly parallell Daisy. Other investigators will have to find ways to make the catalogue more efficient to make it worth their time - such as a support Minh with Scavenging or a Yorick build with enough costly items to make the catalogue worth using his ability on.

olahren · 1933
I know of a certain actor who might want to keep this near his scripts... almost like recursion is an inherent part of his character... — supertoasty · 25 8/4/21
It's a fair point, and I've updated the review to mention Yorick. Our dear aspiring actor can certainly use the catalogue. — olahren · 1933 8/4/21
Question: do we know this takes a hand slot? The text shown here doesn't say. Also a minor point; Bob's item-playing appears to be an extra action, not a fast action. Same net tempo benefit in a vacuum, better in some cases (Payday!), worse in others (engaged by enemy). — HanoverFist · 511 8/5/21
HanoverFist: We know that it doesn't require a hand slot. Luckily! It would be quite a lot worse if it did. Good point with extra VS fast action; I've edited the review (I quite enjoyed Pay Day in my Bob Jenkins VS Circle Undone-test deck by the way) — olahren · 1933 8/5/21
Great addition to a Minh Scavenging deck, probably instead of Charles Ross. — AlexP · 198 9/1/21
olahren: Awesome, that does boost this card's stock significantly. It really feels like the design of this cycle leaning so heavily on multiplayer asset-trading(Bob Jenkins, Untimely Transaction) hinges on getting more slotless assets worth trading. This now kinda fits that bill- everybody likes money, and this is basically money in book-form. Just... not very much of it! — HanoverFist · 511 9/6/21
Do you play emergency caches? If so, why would you look at this card and say a net gain of 3 resources for a card and a play action are no good? — AussieKSU · 645 9/28/21
And the cost of 2 resources, and the item limitation is mute compared to the regrowth you can get with scavenging. Sure it's not as universal at e cache, but it's much stronger in many ways. — AussieKSU · 645 9/28/21
It's a niche card, but for that niche, it's a perfect fit. It's stronger in multiplayer if you have partners with expensive decks, and, of course, if you have some way of bringing it directly into play (IE, Scavenging(2) or Yorick). — Xelto · 6 10/9/21
There is also the additional benefit when playing Dark Horse that you can still play more expensive Items without sacrificing the benefits of Dark Horse while saving up to play them — ForrestWoodward · 1 12/4/21
6

I feel the other review underestimated the value of this card in one investigator: William Yorick. I play him in Innsmouth right now with 2 other players (one scenario to go, and until now we are rocking the campaign on hard, but without taboo list), and from my impression it's time to say: In him, this is no niche card, it's a staple!

There was not a single game, where I didn't play the catalog at least 4 or 5 times, in one game it might have been up to 8. But the secrets were hardly ever wasted. I will keep going shopping into the Maelstrom.

Susumu · 211
Great suggestions. I want to try something like this myself. Maybe to mitgate the lack of SttP+Ever Vigilant by taking geared up plus one or two backpacks(2). Hard mulligan for the backpacks can result in a really big pile of items in play in the first round with teh catalogue among them. Unfortunately this makes the first round quite swingy if you cant find a backpack, I guess. — 10erRingscheibe · 27 1/12/22
Never mind, Geared up neither works with backpack nor with the catalogue, since you don't put them out one at a time (like ever vigilant). — 10erRingscheibe · 27 1/12/22
I wrote it into the comments in another review: I think, the "one at a time" on "Ever Vigilant" is an unnecessary clarification. Playing a card is always a Sequence, you have to initiate. So you can never play multiple cards "all at once". That said, "Geared Up" is not really apealing to me for some reasons. I do agree though, that if I ever take it, it would be definitely in an investigator without level 3 Guardian access. — Susumu · 211 1/12/22
5

I think one aspect wasn't mentioned so far by the other reviews: the Schoffner's Catalogue can pay for a second copy of itself, because it is also an item.

I think this has a fun combo potential with for example two Ice Axe(3) and Scavenging/Scavenging(2) in Minh Thi Phan. If you have two catalogues in play/discard, you will never run out of money for recursion of the axes or the second copy of the catalogue, provided once in a while you don't use your scavenge on an axe but to return an empty catalogue. Of course you have to find all this, but with the search-tech of and Minhs tendency for a lot of card draw its fairly doable.

Also the Backpack or better the Backpack(2) can dig deep to find all pieces exept scavenging. As a nice side effect it can also find other nice stuff like her favorite dairy or totem, which of course can also be paid by the trusty catalogue. As mentioned by others, you can even go for a dark horse-item-skill-build with this combo.

10erRingscheibe · 27
Yea, I agree. I bought a second copy of the catalogue from the first several times in my run as Yorick, and most times from the graveyard. The money was often gone again by my next turn. — Susumu · 211 1/12/22
3

This was a pretty useful addition to my Dark Horse Patrice deck. It let her stash resources "off the books" and use them to pay for the relatively limited number of items in the deck that she absolutely had to be able to play when they came up (Moonstone and Patrice's Violin are very timing dependent), plus the odd extra. It's more or less an Emergency Cache where the action to play is divorced from the time you use the resources. I suspect the "stashing" effect is a benefit in most Dark Horse decks, but I've only played the one.

I also love that it uses secrets; I am sure Schoffner's motto is "The Secrets are the Savings!"

This card is so dang good it's actually ridiculous.

At worst, it's sort of like a net Emergency Cache anyone on your space can spend on items (not a huge restriction for most decks). At best, it's a complete loose cannon. It allows for such crazy plays. If Yorick has both this and Chainsaw in his discard, he's set -- no other moving parts required. Minh can Scavenge it into absolutely filthy combos recurring high value seeker assets. It even discards itself so that happens smoothly. It's red and level 0, so an easy target for a lot of Survivor recursion if someone's running low on dough -- which is practically your starting hand if you're running Short Supply. And Dark Horse can't see it. I'm sure there are things I'm missing.

It enables so many shenanigans in the most wonderful ways. Just a brilliant card.

MrButtermancer · 30
I don't really see it. At best its a slow emergency cache. And you're really spending your recursion to get this thing back instead of something more useful? How many items are you playing? — fates · 17 5/8/22
0

Can you use Knowledge is Power to get a fast 5 resources to pay for an item? And as an option discard the catalog for a fast card draw?

Also can you do this as Lola Hayes in Seeker role to target any color item?