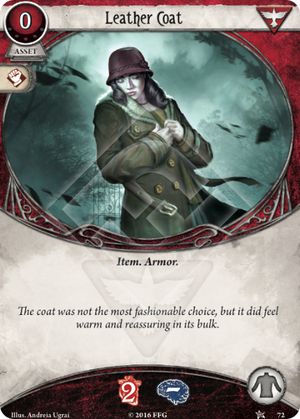 The leather coat is the current state-of-the-art proactive damage prevention tool! As a survivor character, i would pack one every time i go out adventuring. The inclusion is harder to justify for other factions as they miss the opportunity to recycle old coats.

Synisill · 312
If you're using scavening, you CAN use this card to boost combat tests as well as wendy or ashcan's ability. When discarded by damage, you can even play it again, if you scavenge successfully. — Django · 2631 6/1/17
It's all about Yorick and Survival Knife, Baby. Toss in other soak, and kablamo -- free actions. — crymoricus · 196 1/5/19