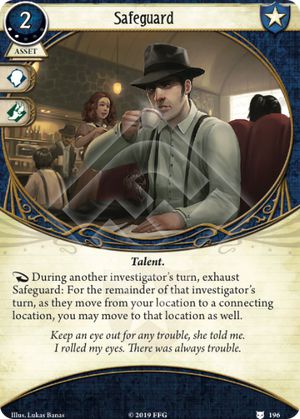 So this one could well be my new favorite -card, the wording is a bit out of the ordinary though. For some reason this card's -ability does not have the triggering condition beginning with the word "when" or "after" - quite confusing. So my guess is that the "as" is identical to "when" and per RAW for the "when" condition during the resolution of -abilities it will read: "[...] with the word "when..." may be used after the specified triggering condition initiates, but before its impact upon the game state resolves." - i mean, isn't this amazing, your average amazingly fast or someone like Rita Young now drags her along with her and when they encounter an enemy on the way the will move in AFTER the triggering action initiates but BEFORE the impact on the game state resolves, or in a nutshell this card basically says: "You can now drag you favorite with you over half the board and let her engage the enemies for you so you can take care of your business in peace." - As an additional bonus the 's movements are not actions, so if the is already engaged with an enemy, the drags this enemy along without AOs being triggered. Think about the possibilities this opens up, you can free locations of enemies if you need, or push mobs together, if you are a and want to Storm of Spirits. This is a new dimension of play for your .

thakaris · 184
I read "as" as being simultaneous, whereas "when" interrupts (and "after" is clearly subsequent). If it's simultaneous you'd get to choose which of them any monsters would engage (assuming no "Prey" keyword), which is probably better. (With Prey it may be worse though.) — Yenreb · 15 1/15/20
Pretty much an auto-include for any investigator that can take this. There’s really no reason to refuse free movement. This card is severely underpriced. Even if you could only move one location at a time it would be worth it. — c-hung · 3 1/29/20
they made a level 0 version fo this card that moves you after your teammate moves and I still think its close to auto-include status. — Zerogrim · 236 1/28/21
6

I love this card so much. Sometimes it feels hard to stick to your Seeker. You lag behind while prepping for enemies, but now you don' t have to! Just plop this down in the turn you play your weapons and ride on the back of your Seeker friend. Another tool to compress Guardian actions to focus on protecting their friends. Whereas Heroic Rescue, "Let me handle this!", and Taunt are all fantastic cards, the reusability of Safeguard makes it a great choice. It's also easy to play via cards like Ever Vigilant.

Furthermore, when your Guardian finishes using all 3 of their actions to do combat, they cannot be by the Seeker's side during the next mythos phase when the Seeker has moved to a new location only to spawn another enemy. Safeguard makes sure the players are in sync and there isn't a stagger where the Guardian spends 1-2 actions to catch up to the Seeker surrounded by enemies.

It also makes the movement cards off other investigators twice as good. Combo with things like:

chirubime · 12294
Who do enemies engage when moving with this card? — Django · 4108 3/11/20
It says 'as' rather than 'after', so I presume it happens simultaneously. This being the case, absent any specific prey conditions it would be up to the lead investigator to choose. — Sassenach · 158 3/11/20
I was going to argue that their action needed to resolve first, but I think Sassenach is right: use of the word "as" definitely implies that the actions happen at the same time. — SGPrometheus · 635 3/12/20
We played it like that and it was hilarious, Mandy pathfindering around while tommy gathered all those cultists with safeguard and no one took OAs — Django · 4108 3/12/20
It doesn’t usually combo with Think on Your Feet, since Safeguard can only be triggered on an Investigator’s turn, and ToYF is rarely used during a player turn. — Death by Chocolate · 1105 3/12/20
You're right. the chances of that happening are probably very minuscule. Probably equally situational is moving with an Elusive should that investigator choose to move only 1 location away from yours. But i forgot to add Survival Instincts is probably more usable with this card. — chirubime · 12294 3/13/20
I have been trying to find ways to consider this card as simply a powerful card vs one that is overpowered. And it is difficult. Combo'ing this with a Pathfinder Seeker can net someone multiple free moves a turn and keeps the Guardian/Seeker in sync for the mythos phase draw. The one argument for it simply being a powerful card is comparing it to Pathfinder which is also a very powerful card. And most importantly neither cards breaks the game like some cards do but they will likely be auto upgrades in every eligible deck. — TWWaterfalls · 832 3/15/20
Step 1 : Play Leo Anderson with Safeguard(2), Dynamite Blast(any) and Elusive. — Fovar · 1 5/6/21
Step 2: Have someone play any seeker (Ursula Downs would work pretty well) with Pathfinder(1) and Shortcut(0), which she should do anyway. — Fovar · 1 5/6/21
Step 3: Have her travel into every location with a monster +1, do not follow into the last area, play elusive on your turn (after attacking if some are tough cookies) and Dynamite whatever is left in the room. Bam. Up to 7 areas worth of enemies in one single area blast. And there was still some investigation going on. — Fovar · 1 5/6/21
3

I was curious if there was any way to fannagle getting two people into a locked room with this, so I asked the dev team. The short answer is no. The long answer is the email below:

Thanks for the questions! For the answer to your question about moving into the Vault with Safeguard: The text on the Vault states that you cannot enter the Vault unless you control the [Elder Thing] Key. The text on Safeguard lv 2 allows you to move to a connecting location with an investigator AS they move. Here's the breakdown:

Please note, though: with the wording on Safeguard lv 0 ("After another investigator moves from your location to a connecting location, exhaust Safeguard: Move to that location."), you are able to follow your friend who controls the [Elder Thing] key into the Vault, as the timing of the move occurs After​ they move into that location. So oddly enough, Safeguard lv 0 is more helpful in this situation than the upgraded version!

I wonder why they didn't call this card "stalker". After all it's mostly about those lecherous guardians going after good looking Seekers, save for Mark Harrigan who's more into Sophina.

Anyway, one guardian can also use this on another's safeguard. The result will mostly be the same as if both had stalked the same person, except the unlikely case she lied to the first about a Shortcut to get rid of both at the same time (so they could focus on a BBEG at an adjacent location).

Django · 4108
I don't see how you can safeguard a safeguard. The only legal Safeguard target is the investigator currently taking their turn (so you can't target the other guardian during the seeker's turn), and the effect expires at the end of that turn (so you don't get to do this by Safeguarding the guardian on their own turn before the seeker's turn either).. — TheNameWasTaken · 3 3/15/20
You can play 2 :-) — Timlagor · 3 8/29/20