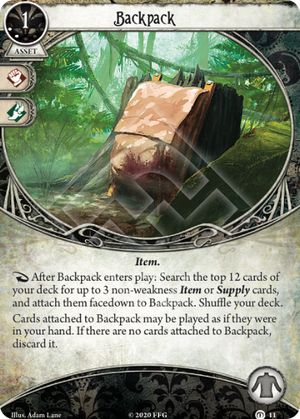 At only 1 resource and 2XP, this upgrade to Wendy's Amulet looks like a terrific way to make her more reliable!

As a neat bonus, it can be included in non-Wendy decks that may lack reliable tutors, to dig out such as:

Grab two of them so that even if you don't pull the 1-of that you're looking for, there's a good chance you'll find a Backpack in your Backpack, so you can tutor after you tutor. (If you like that.)

There are two main benefits of note with the Backpack upgrade.

The first and 'lesser' benefit is the cost reduction, and even that isn't insubstantial. Going from 2 cost to 1 cost is only 1 resource saved, but it makes a huge deal for characters who want to set up on turn 1. Having 4 Resources to work with instead of 3 means you have that little extra wiggle room to do something like play both Lockpicks and Switchblade, or set up two Hawk-Eye Folding Camera in one turn. It also makes the Backpack a much more attractive option for those who plan on cycling through their deck by finding and using another Backpack - 2 resources for a deep search is a much lighter cost than 4 resources, and those 3 resources remaining can help you get out one more play. It even serves as a reasonable card to draw when you're running low on resources - since you'll usually have your upkeep resource to use, and if nothing else, this will help thin your deck down afterwards.

The second and more notable benefit is that you're now able to search through 12 cards of your deck. At the start of the game, that means you're dipping through about half your deck, which is a very effective way of finding something useful. Even Prepared for the Worst only digs through 9 cards, and search through what's often a smaller subset of Items. This massively improves the reliability of the action. And, while it won't quite be as available as using Stick to the Plan for PftW, this has the potential of landing a fairly reliable Ever Vigilant. This becomes a tempting option rather than trying to buy a second copy of a high-XP card. Even before that point, this can boost reliability when only using 5 or 6 other item cards total, allowing for use at much lighter item counts than the base version.

Digging deep also means that you end up with addition synergy on Research cards. Effects like Astounding Revelation and Surprising Find suddenly become much reliable. With the recent Taboo of Mr. "Rook", the cost of repeatedly searching cards becomes higher, and this can be a reasonable substitute or convenient earlier step. It also has the advantage of using a common tag, meaning you aren't forced into inconvenient build plans in order to trigger them. It's not enough to trigger every Research card on its own, but it's something that can easily be slotted in when you're already using them.

And since I'm talking about Research cards, I'd be remiss to not mention the other obvious Seeker synergy, Segment of Onyx. If you're playing with someone who digs for those segments and manages to use up Pendant of the Queen, the segments all go back to your deck. And guess what can now dig through a 12-card deck and potentially throw out three of them for a single action, as long as you can afford the cost.

To summarize, in common circumstances, the low XP cost and low barrier to use makes this an incredible piece of added reliability. Many non-Caster characters will tend to have at least a handful of items that they want, and many of them also lack anything important occupying their body slot. If you value reliability over power, this is worth a look - and as campaigns go on, that can definitely be the case.

Backpack is literally made me play Emergency Cache again. Its such a good deck thinning and combo piece finder. I never not want to have it. That is all. Muahahahah. Favorite card. Kiss kiss me me. Hue hue hue. 200

Let's keep it simple: Any XP you spend on that fancy Exceptional item is essentially wasted if you don't draw that card during the scenario. Even hard mulligans can fail and leave you scrambling to get set up. This card is one of the best ways to make sure you pull The Skeleton Key or The Red Clock, and even if you are lucky during mulligan, you're likely running other items that it's still helpful to draw into early.

I pretty much always take this card before buying my expensive Item assets unless I'm playing a character who has access to repeatable card draw or better (or more specific) tutors like Mr. "Rook", Research Librarian, or Prepared for the Worst + Stick to the Plan.

mikecheb · 3
In rogue lucky cigarette case 3 is better than backpack. Or take both, they can find each other — Django · 4207 2/18/22
I think Trish may want this, but I agree most rogues probably want Lucky Cig Case 3, both for the tutor power and because modern rogue is basically 'built' around at least 2 cards a turn off Lucky Cig Case. — dezzmont · 122 2/19/22
Think of how many signatures and story cards are items....its a lot, like...a lot, back pack 2 makes it into so many of my decks that emergency cache often sees play just because backpack 2 is so good. — Zerogrim · 249 2/20/22
1

Used very often and always impressive. (~50% Chance to get needed card) Your total cards is 30+ some weakness

Then you draw 5 first card Remained is around 25