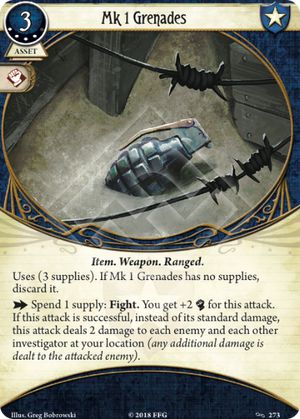 In the 1920s, we didn't have as many regulatory bodies for sports, and thus safety standards were a bit lax. For example, major league hockey didn't require helmets, and Professional Boxers were permitted to carry Demolition and/or Military Explosives.

Accordingly, Nathaniel Cho loves these things. He absolutely needs his Boxing Gloves, and thus has no slots for backup weapons to support his +1 event dmg for the turn. Sure, there's Bandolier, but the beauty of the Boxing Grenades is they're slotless, accomplishing in 1 card & 1 action what Bandolier+(weapon) do in 2 of each.

Better still, they give your Ringside Manager something more to do when he shows up late to the match:

It's these little details, recreating the pastiche of the early 20th century, that I really appreciate about Arkham Horror's worldbuilding.*

*- ...I know absolutely nothing about boxing.

As a "weapon" that does not occupy any slot, It's a good secondary to kill critters, while saving ammo on your big guns. Albeit at the risk of hurting other players, but there are ways around that.

Avoiding damage to other players

Side question, how does Hatchet Man interact with this card? Is the extra damage dealt to the attacked enemy or the target of Hatchet Man?

Django · 3800
Hatchet Man only deals the damage, if you throw the grenade at the evaded enemy (the others arent attacked) — Adny · 1 7/8/19
Hatchet man says "the next time the evaded enemy takes damage this turn, deal it 1 additional damage", so it doesn't care about who is attacked. My question is wether that part of Hatched man takes precedence over the grenades part in brackets "any additional damage..." or not. — Django · 3800 7/8/19
I misread the card... The additional damage on the grenades cares about the damage, that i added to the attack, like Vicious Blow or Marksmanship. Hatchet Man triggers on damage being dealt, so it still hits the evaded enemy — Adny · 1 7/9/19
I agree, I take it to read as any target-unspecified additional damage. It's italic so it's clarifying text, not a new rule. — pneuma08 · 25 7/12/19
Marksmanship requires a firearm — Chitinid · 14 6/18/20
Never mind, it works with ranged — Chitinid · 14 6/19/20
1

This is not a review so much as a response to the FAQ entry on the interaction between Mk 1 Grenades and Marksmanship. It ends with a statement that “the bonus +1 damage from Marksmanship would be dealt to the attacked enemy, and not to the other enemies at the location.” This is not necessarily true, it should be clear that the Grenades won’t deal ANY damage ‘to the other enemies at the location’ or even ‘the attacked enemy’ if you targeted an enemy at an adjacent location. Mk 1 Grenades damage ‘each enemy and each other investigator at YOUR location’ INSTEAD of its standard damage. Because it won’t deal any damage to the attacked enemy from the attack, it can’t deal additional damage for the same reason that Deduction can’t discover additional clues when used with Burglary or Unearth the Ancients.

If FFG wants the Mk 1 Grenades to work with Marksmanship, they would need to say ‘each enemy and each other investigator at the attacked enemy’s location.’ Or have Marksmanship work like Luke’s ability where you Fight as if you were there.

(If Marksmanship is used on an enemy at your location, of course the additional damage will apply if the condition is met.)

Death by Chocolate · 978
It does not make sense to differentiate between different locations. The standard damage effect is replaced in both cases, so I would say that the additional damage should not apply in both cases, if there is no (any additional damage is dealt to the attack enemy) clause. But there is. So it is what it is. — ak45 · 390 11/19/19
This looks as a completely unintended consequence of the wording. The FAQ implicitly answer that the interaction should work as expected (damages can be done at another location), and not as written (which would be "damage only work at your location"). Within the text of Grenades, "your location" and "the enemy location" are synonymous, hence interchangeable. While I agree that for interactions purposes, it would have been better to write "at the enemy location", I think it would have been more confusing as a wording than "at your location" — MoiMagnus · 60 11/21/19
I asked this question via the Rules Questions form on FFG. MJ's response: "Sadly, I think the two abilities as printed would be incompatible. Marksmanship allows you to target an enemy at a connecting location with its attack, but Mk 1 Grenades clearly states: “instead of its standard damage, this attack deals 2 damage to each enemy and each other investigator at your location (any additional damage is dealt to the attacked enemy).” It’s awkward, but I can’t really see any way around it; if you targeted an enemy at a connecting location with the grenades, only any additional/bonus damage would get dealt to the targeted enemy, and the rest of the damage would get dealt to each enemy and other investigator at your location, as it states. Sorry for the confusion! (I don’t think it would be particularly broken if you house-ruled it to work the way that makes more sense thematically though. I certainly wouldn’t slap the card out of your hand.)" — magistrix · 397 5/6/21