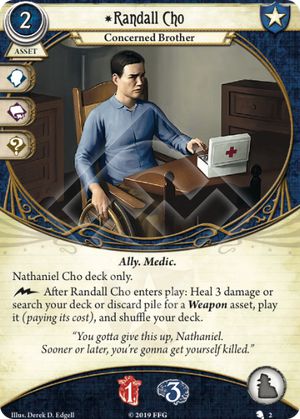 As far as signature cards go, Randall here is on the simpler side - as befits a starter deck - but that simplicity is packed with strength. Looking beyond the advantage that he's cheap and he has significant horror soak, the versatility in his reaction ability makes the margin where he's a sub-par play very slim. If he's your first play or among the first, you can find a weapon to prepare yourself. Later, he can heal a massive amount of damage from your face, giving you more longevity. The space where you're supplied with weapons and at full health is pretty small. Best of all, and this is pretty heartless, but once he's done his thing there's no reason not to have him soak as much horror as possible. Thanks bro!

All in all, Randy's a cheap ally with a strong etb effect and a lot of horror soak; perfect for a low-sanity guardian. His ability ensures that he's a good play no matter when you draw him... unless you already have Grete or Beat Cop in play.

SGPrometheus · 646
A bit like the miskatonic army, he's a (powerful) expendable ally. I'd try to ditch once i get the effect or have him "Calling in favors" to heal and return him to your hand. Guardian can't revive allies so you'll probably only see him once per game. Versatile + Chance encounter could get him back but only for a turn, i don't think that's worth it. — Django · 4207 9/3/20
Calling in favors to swap out for Grete or Beat Cop and then re-playing for more heal is always good. — SGPrometheus · 646 9/3/20
3

Surely this card is misprinted. If Randall's ability is truly a trigger like it says, and not a , he can do it an infinite number of times upon entering play. Needless to say, that's pretty good. But the icon is certainly wrong, no?

Assuming so, my assessment would be that Randall is still a good, simple ally. Nathaniel's worried about sanity for sure, and the closest comparable horror soak available to him at level zero would be Something Worth Fighting For, which doesn't really do much else. But the real value in Randall is of course his ability, which even assuming it's meant to be a reaction, ranks him ahead of comparable cards (Tetsuo Mori and Prepared for the Worst) for two reasons: 1) Randall searches the entire deck for the item, and 2) he immediately plays the thing. This is pretty economical.