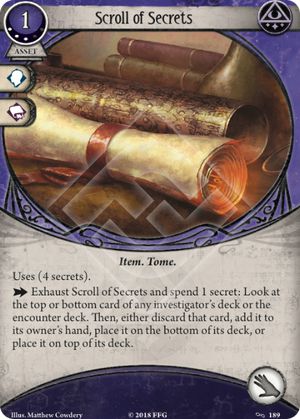 Must say I don't think they got this one right as an upgrade. You're spending 3xp for one additional secret and a willpower pip. The seeker version is vastly superior since it allows you to search three cards at a time and do something to all of them. That's a card that has legitimate utility to a number of investigators. This ? Not so much. I honestly can't see why anybody would ever buy this card. It's only marginally better than the Lvl 0 version. If it was a Lvl 1 card then it might be worth adding to a deck. 1xp for an extra secret seems about right, a small investment for a small bonus. At 3xp it's just prohibitively expensive.

This would have been much better if it was a free action trigger. That way you'd have two different upgrade paths, both of which were valid. Seekers would get the greater range of cards they could influence, mystics would get the much more limited scope but without having to spend any actions to use it. As it is though, I'd be amazed if anybody ever uses this card in their decks.

Sassenach · 114
This also lets you look at the top card of the deck, the unupgraded version only looks at the bottom. — cfmcdonald · 7 6/1/19
Ah yes, so it does. That does make it a little better then. Still not worth 3xp though in my opinion. I could see how a combo with Alyssa Graham or scrying might be effective, but that's going to be finicky to set up. — Sassenach · 114 6/2/19
Really, there is a big difference between the top and bottom because of the four options the card gives you. Putting a card on the bottom or discarding when you took the card from the bottom initially is mostly worthless. Hitting bad cards with this version actually gives you some value. — Death by Chocolate · 14 6/3/19
Sure, but the vast majority of the time you're not going to hit a weakness. There's a big difference between drawing a good card from the bottom than one from the top, which you would have gotten at the end of the round anyway. — Sassenach · 114 6/3/19
I think this would be bad as a level 0 card. — CaiusDrewart · 1767 9/11/19
I think the major redeeming quality of this card is that it synergizes well with Wendy's amulet. So if Wendy is in your group, you can potentially let her reuse the same card 4 times. Imagine Wendy committing "Look what I found" to a skill test and then using that card on a fail to get 2 clues, then it's your turn and Wendy's get the card back in her hand. Repeat 3 more times. — Killbray · 47 9/20/19
I agree with @Sassenach -- this card is a dud. Manipulating the encounter deck is a cool mechanic, but it's rarely worth it to pay an action to check the top card. Whatever you do with that top card of the encounter deck, you are (essentially) putting another encounter card on top that reads: "Surge; Revelation: lose one action." Just not worth it. — Mordenlordgrandison · 113 3/7/20
0

Bad combo piece. This card has only value over the level 0 version if you already know what's the top card of your deck or the encounter deck. It'd be amazing with Norman Withers if his text didn't force you to immediately draw every weakness you see on top of the deck. It might still be ok on him.

Otherwise you need effects like Scrying or Alyssa Graham to make this more valuable than the base version, except these cards already do good things on their own. This card does not justify itself over the base version.