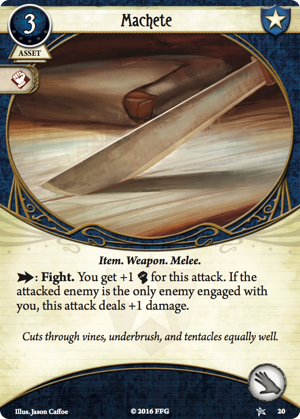 The decision to increase this to a 2xp card was a very good one, because it was just too strong At level 0, making all other level 0 weapons poor contenders when the Machete is available. Looking back to before the taboo, the existence of Machete was very frustrating, because it discouraged trying out other weapons. Also, it permanently takes up a hand slot, making it harder to use other tools (like magnifying glass for Roland, etc) and 2-handed weapons.

So how does it stand as a 2 xp weapon? It’s still good, and now fills a nice niche instead of just limiting deckbuilding choices. At the time of this review, your choices at level 2 Guardian include Machete, Survival Knife, .32 Colt, Blackjack and .45 Automatic. Each has its own merits, and among these the Machete is still a top choice for investigators with high combat.

jmmeye3 · 577
The problem now is that Enchanted Blade exists at level 0 doing essentially the same thing Machete did, and its upgrade is about as costly and superior to Machete. — StyxTBeuford · 12720 8/29/20
Yeah, I very much swapped Enchanted Blade in for Machete and never looked back, and it's worked fine. Still, it doesn't feel as exclusive as the old machete; once its three charges are gone, I'm not worried about losing it, like I would be with this. — SGPrometheus · 646 8/29/20
Totally agree with SGPrometheus- Enchanted Blade is a great weapon, but doesn’t create the same problem that Machete did for multiple reasons. When the charges run out you will want another weapon, and it doesn’t outperform other weapons outright, for example the .45 Thompson is cheaper per bullet when factoring in card and action to play each, .32 colt can do twice as much damage with the right investigator. — jmmeye3 · 577 8/30/20
But then why not just spend more XP for Timeworn Brand? That’s the problem with Machete- it’s not good enough to warrant the 2XP right now. If it were 0 it would at least compete with E Blade. Maybe the solution is to up E Blade by 1 and decrease Machete by 1. — StyxTBeuford · 12720 8/30/20
I don't think the blade needs to change; it's not crowding out every other option like the machete did, it's just good. I do think that machete could come down to 1xp, but people would still not take it: I never go from the .45 to the .45(2), then to the lightning gun, because that's a waste of xp. That's the reason machete never gets used: it's in the middle and has no upgrade. It can't go anywhere. Even if you upped the blade to 1xp people would still take it, because they can then spend only 2xp for the upgrade; the xp to purchase it wasn't wasted when you replace it. — SGPrometheus · 646 8/30/20
Disagree on E Blade not crowding out options in exactly the same way as Machete, but I do agree that people would just choose E Blade in that situation since Machete has no upgrade. — StyxTBeuford · 12720 9/1/20
15

Machete is one of the finest weapons in the core set. It's cheaper than the .45 Automatic, not limited in the number of uses like that or the .41 Derringer, and it's damage bonus is reliable too. The only issue is the need to be engaged to an enemy - and only one enemy - to get that damage bonus. Even if you can't, though, it's still as good as a Knife, and often you're only having to deal with one enemy at a time.

It's a great weapon for Roland Banks or "Skids" O'Toole, though it's less clear that it's a good choice for Zoey Samaras, as it seems to her advantage to engage with as many enemies as frequently as possible. If used in a group with Scrying to control the flow of encounter cards, it's a really useful weapon for Roland to have; keep him engaged with only 1 enemy, damaging lots and gaining clues.

This one is one of my favourites, because it is middling priced, effective, doesn't use ammo, and in an uncertain world, reliable.

AndyB · 901
I agree on all these points. The one thing I don't like about this card is its name. Who carries around a machete or even has access to one? Machetes are a fairly uncommon tool. Skinning and/or bowie knives, however, are much more common and they seem more appropriate IMO. — FractalMind · 33 2/24/17
I agree with this review's praise of the Machete, but I don't understand the trepidation about the Machete and Zoey. It's clearly the best level 0 weapon for her. — CaiusDrewart · 2741 3/26/18
Yeah, there's no particular reason why Zoey wouldn't want to engage enemies one at a time, the same as anybody else. If she tries to without special cards, she'll draw attacks of opportunity. — sfarmstrong · 255 6/26/18
@sfarmstrong: Yes, and there's even some synergy between Zoey and Machete. Let's say Zoey is unoccupied and a teammate on her space draws a monster (a very common situation). Machete encourages Zoey to spend an action engaging that monster before she attacks it, so she can get the bonus damage. Zoey's ability makes this need to engage less of a waste. (And it goes without saying that the Machete is a perfect thematic fit for Zoey!) — CaiusDrewart · 2741 7/18/18
7

Three campaigns in, and Machete remains the best level 0 weapon in the game. At the very least, for all five Guardians presently in the game, it is the weapon of choice. It could cost 2 or 3 XP and it would still probably be worth buying. At 0 XP, it's a steal. Getting a weapon that deals +1 damage into play early is vital, and there's no better option than Machete.

Compared to .45 Automatic, .41 Derringer and the like, the fact that Machete doesn't have to deal with ammo is a gigantic advantage. One Machete can last you literally the entire game. These other weapons will run out of ammo after killing an average of about two monsters, which is nowhere near enough to last a scenario. There's no contest here.

Compared to Baseball Bat (also a great weapon), the fact that Machete doesn't break and only takes one hand slot gives it the clear edge, in my opinion, even for Yorick.

Compared to .32 Colt, the Machete's to-hit bonus just makes it better, as far I'm concerned, especially when the difficulty level goes up. Guardians will often want to run both, of course, but there's no doubt which of the two I'd rather draw in the vast majority of situations.

As for Machete's "only engaged with one enemy" drawback, I don't see this as that big a deal. In solo play, enemies most often come at you one at at time anyway. In multiplayer, you can usually coordinate with your teammates such that the Machete wielder is only engaged to one enemy at a time.

Furthermore, if you are absolutely swarmed by enemies, the Machete still isn't necessarily worse than its competition. Will a .45 Automatic be better if you're fighting a bunch of enemies? Hardly, as it'll just run out of ammo.

Extra-damage effects like Vicious Blow, Beat Cop, and Zoey's Cross are also helpful for circumventing Machete's drawback, as if you are fighting two enemies you can use these to rapidly dispatch one, and then unleash the full force of Machete on the other.

Yes, there are occasional enemies, like Poltergeist and Conglomeration of Spheres, against which Machete doesn't work or doesn't work well. But so what? In the grand scheme of things, these enemies are relatively uncommon. The fact that the Machete isn't absolutely perfect isn't much of a criticism against it. Against the vast majority of enemies in this game, it's dominant.

CaiusDrewart · 2741
I was thinking recently about the weapons that Forgotten Age, a jungle-crawling expedition-based expansion, might introduce, and it occurred to me that the most logical thing would be... a Machete. Putting that aside, here's hoping that it gives us something to compete with this god-killing uber-weapon. — SGPrometheus · 646 3/27/18
0

Nothing really to say, just wanted to post my custom upgrades of some Core set cards I created and wanted to share.

Here are the links:

I would really love to see a Machete (3), Holy Rosary (2) seems fair (maybe a little overpowered) and the upgrades of Guts, Perception, Overpower, Manual Dexterity and Unexpected Courage seem like a great way to spend leftover XP.

matt88 · 2561
Ism — Django · 4207 10/11/18
Sorry about double post. Your linked Images won’t load on Arkham dB but that website has some sick looking ads... — Django · 4207 10/11/18
Is there a policy for discussing custom cards on arkhamdb? I don’t know. Either way, here is some quick design feedback: The upgrades skill cycle seems reasonable, but for design consistency with other upgraded skills, remember that high level Innate and Practiced skills gain the Developed and Expert traits respectively. Machete is really boring - just removing it’s actually interesting mechanic to make it stronger and lose its flavor isn’t interesting. Holy Rosary 3 is way too strong. The relic restriction is cute, but being a cheap +2 stat stick that can be easily stacked using Relic Collector is too nuts. Maybe as a level 4. — Death by Chocolate · 1170 10/11/18
@Death by Chocolate Thanks for the feedback, I will edit my review to add those traits to the neutral skill cards and I will modify Holy Rosary so that it costs more in resources and maybe in XP as well. Machete might be boring, but I like it's efficiency. Seems like a reasonable upgrade to me. I might also add some new cards, I have a few more ideas in mind. — matt88 · 2561 10/11/18
@Django They load fine to me and it seems to be loading fine to other people as well. I don't know what the problem might be. — matt88 · 2561 10/11/18
@Death by Chocolate I fixed the Holy Rosary (2) + Relic Hunter issue by adding a "Limit 1 per investigator" condition on it and modified it so that it is less powerful. It might still be overpowered but I like that it can be obtained by Daisy and Sefina and maybe some future investigator that has Mystic as his secondary class. — matt88 · 2561 10/11/18
@Death by Chocolate Also added a few new cards. Check them out. — matt88 · 2561 10/11/18
Interesting upgrades. The only bummer is that you are focusing on cards that are already good on the first place and don't need an upgrade. It would be allot cooler if you do upgrades for cards that are actually bad/mediocre but still quite thematic and fun to play like "Unearth the Ancients" or "Knuckleduster" or even a revised version of "Springfield M1903". — Alogon · 849 10/14/18
Machette(3) is just a cheaper, better, Timeworn brand. I question that! Also it completely lost what differentiates machette from other cards. Guard dog(2) gets net +2 stats, this along with +1 proable damage (nearly tripled damage in the right maps), seems too good. Holy rosary is super powerful, the effect seems like it'd be at home on a different asset that gives +2 will on spells specifically. Like. Spirit athame or something. I like te new text on flashlight, but the cost, fast and extra charge overdo it, a lot. I however love the skill cards, a lot. — Tsuruki23 · 2256 9/1/19
I am sorry,machete does only 1 dmg half the time when multiple monsters are present or you want wo hit monsters which are engaged with other gators..engaging actions are such a waste.. — xarathornx · 1 5/19/22