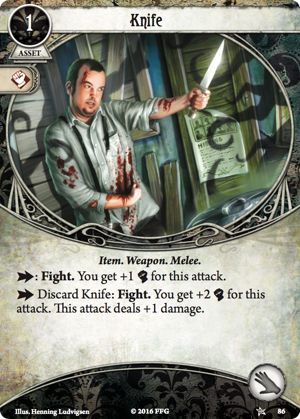 Knife is an easily overlooked card that is outshone by other weapons. Some people quickly jump on the conclusion that it's simply trash, however it definitely has its uses, at least for now with the current card pool early in the Dunwich cycle. The card's two main positive aspects besides that it's neutral and useable by every investigator in the game are that it's incredibly cheap and can be used for a single +2 combat +1 damage attack which is an even better fight action than a Machete swing.

I think there's mainly two situations where Knife becomes useful. Knife is useable as a filler weapon in a deck where you want to draw a weapon as fast as possible, like a set of 2 .45, 2 Machete, 2 Knife. Once you draw one of the actual weapons, you just throw the knife at someone for some nice damage. Of course for that case it will become less important once the classes have more weapons to choose from, but until then it's a nice backup. Alternatively you use it with an investigator who HOPEFULLY never has to actually fight, but might still need to defend herself one or two times like Daisy Walker.

Instead of comparing Knife just to other weapons, I think it's better to also compare it to more supportive cards like Overpower and the recently previewed Prepare for the Worst. They all have positive and negative sides, so it comes down to personal preference or the composition of the deck to determine which might be better. For Guardians, Prepare can act almost like your 2nd/3rd/4th copy of an actually strong weapon, but it could also just fail and waste an action. Kukri is way more action hungry and doesn't give bonus damage (it's useful to know that, unlike Kukri, Knife can potentially kill a 4hp monster in one turn), but is more reliable. Overpower is the cheapest on actions and can draw a card, but doesn't give any bonus damage. Knife is a nice middle ground, gives a good combat and damage boost, but requires an action to play and a hand slot. And even if you don't have time to actually play it down, you can chuck it on a test as a mediocre Overpower. Oh and of course you can use Scavenging to recur the knife, for what it's worth.

And then we got the release of William Yorick, master knife thrower. Recurring Knife was always a possible option with Scavenging, but Yorick doesn't require the setup of finding scavenging nor the need to investigate. Just pay one resource each time you finish off an enemy with a 6, 2 damage test. Compare this to the .45 Automatic, which gives you one 5, 2 damage test per resource spent, and also requires you invest the four resources up front.

Yes, Yorick can only only recur the Knife once per turn using his ability, but this is easily mitigated. Enemy has too much health? Wear it down with your gun of choice and finish it off with your Knife, conserving ammo (or, just have two knives!). Draw an unlucky and lose your Knife? Scrounge for Supplies to get it back, or if you have some XP under your belt play Eucatastrophe to land the hit and recover both your Knife and the Eucatastrophe. (or, just have two knives! There are very few problems that Yorick cannot solve with a second Knife).

But if you want to roleplay a humble gravedigger, a man who trained himself in the art of blade throwing over a lifetime of lonely cemetary nights with only headstones for target practice, a man who has no qualms retrieving his weapons from the withered corpse of his victim only to turn around and hurl it into the skull of a ghoul stalking him in the night... in that case, Knife is the perfect card.

clarionx · 181
We just started a fresh campaign with a Yorick and found the Unlimited Blade Works to be remarkably effective. Enough so that we’re prioritizing Alter Fates over weapon upgrades. — Death by Chocolate · 1170 6/29/20
I love knife personally, although I do admit it has seen much less play the more cards I get. Yorick is a good choice for this, but I don't know that I'd use scrounge for supplies on it. Isn't there a stronger card you'd rather grab? Also, do Guardians actually use Survival Knife much? It seems like most people aren't a fan, although return to FA should hopefully make it more tempting. — LaRoix · 1580 7/5/20
@LaRoix - I only list Scrounge for Supplies as an example of an emergency Knife recursion option for level 0 Yorrick - scavenging is not a good choice for him due to his very meh intellect, and Resourceful can't target Knife. As for Survival Knife, I consider it much stronger than Knife for Guardians as a starter deck melee weapon, but I'd certainly upgrade it into a Machete or Blackjack(2) as soon as the first scenario is over unless I'm running a martyr Guardian build with Tommy or Leo. — clarionx · 181 7/6/20
5

The other reviews here just assume everyone knows the knife is bad and tried to defend it, so I am here to write the review of why the knife is unpopular.

If you only own the basic set, you may have so few weapons that you feel forced to take the knife just in order to have enough weapons in your deck. Otherwise, though, while the knife is not an unusable card, it is a hard weapon to like.

If you are a combat character, then a knife would be a ridiculously inadequate primary weapon, you need a weapon that does more than one damage and can be used many times. The only purpose of carrying a knife for such a character is to act as an offhand weapon. The knife is adequate for this purpose, you could certainly get away with making a character like this and have fun playing it. But there are reasons why it just isn't that great.

First, it doesn’t particularly solve a problem. A single shot with the thrown knife just isn’t enough extra ammo to really solve an ammo problem, and the knife, while cheap in absolute terms, is actually a rather expensive way to purchase a single extra ammo. The +1 for the held knife is potentially nice against enemies with odd amounts of health, that would be the reason for holding it, but it still isn’t that impactful on the game. It is only relevant if your other hand is holding a gun with ammo (not your enchanted blade or timeworn brand or switchblade), and it is only +1 – you always have the alternative of just punching the foe if you need to save ammo.

Third, limited deck space. With only the basic set I was often desperate for any card that would act as a weapon so I might put a knife in my deck for that reason, but now that I have lots of expansions there are always more really cool cards to put in the deck then I have space for, leaving little room for mediocre cards like the knife. And in any case, the number of weapons in the deck is not so large that I can guarantee drawing two of them in my starting hand. Since a combat character is practically crippled without a weapon I would really prefer that every weapon in my deck be a weapon I’d be content to see as the only weapon in my starting hand. A knife just is not acceptable as the one weapon you drew. And if I draw two weapons, instead of one of them being a knife, I would be quite happy to get a second real weapon, use the first weapon until I get more money, then play the second weapon if I run out of ammo on the first weapon.

If you are not a combat character, you could cheaply play a knife to kill rats or as a one shot desperation weapon. The problem is that it takes up a precious hand slot for a weapon you're really planning to never use, you're likely better off putting something useful in that hand and either evading, or relying on your friends to protect you, they will likely do a better job running over to fight monsters than you with your one puny knife throw.

ChristopherA · 93
I don't see knife as an asset anymore, I see it as an event that deals 3 damage with two attacks...but now one two punch exists so if you can afford the extra resource it makes knife near useless outside of very niche decks. — Zerogrim · 249 5/5/21