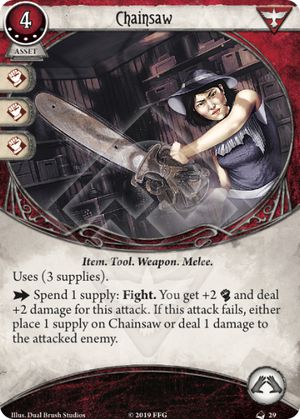 Each L&L is triggering at the same timing sequence of 'after the first failed test ends', but due to the rules for Nested sequences must wait until the previous L&L is fully resolved.

Thank you for coming to my TED Talk.

Death by Chocolate · 581
? — MrGoldbee · 517 8/30/20
He's saying you can do 17 damage in a single action with the Chainsaw as Silas, assuming the stars align and you have exactly the right cards in your hand, which isn't likely, but it is funny. — SGPrometheus · 278 8/30/20
can't you only play live and learn in response to a failed test, though? — Zinjanthropus · 155 8/31/20
Yes; in this example, he fails the first two test. Oh, I guess it's two actions. — SGPrometheus · 278 8/31/20
I guess where I'm confused is the part where it's Live and Learn + Resourceful succeed followed by Live and Learn + Resourceful succeed. You can't play Live and Learn to redo a successful test. — Zinjanthropus · 155 8/31/20
Those are the live and learns from before going off. — SGPrometheus · 278 9/1/20
While the first two tests fail, ALL four Live and Learns are in the timing window ‘after’ that first failed test. Per the rules, if a triggering opportunity occurs and an ability is played, after that ability is resolved you are STILL in that same timing window. It is like why Nethaniel can defeat an enemy, trigger Boxing Gloves which draws Glory, then play Glory which draws Evidence, and then play evidence - after each ability finishes resolving, you are still at the ‘after an enemy is defeated’ window. Likewise, each Live and Learn is played when you return to that ‘after a failed test ends’ window. — Death by Chocolate · 581 9/1/20
Interesting. The Nathaniel Cho example actually makes perfect sense to me, but in the case of Live and Learn, you're doing 2 skill tests between failing the first test and playing the third L&L. I will take your word for it, though. Sometimes the rules are unintuitive. — Zinjanthropus · 155 9/2/20
Not that I didn't already think Live and Learn was a really good card, but it makes it much better that you could theoretically trigger it a second (or third or fourth) time even after one of them succeeds. — Zinjanthropus · 155 9/2/20
@Zinjanthropus There’s nothing particularly sacred about skill tests here. ‘Making a skill test’ as part of playing live and learn is just a game effect - same as ‘drawing a card’ as part of Glory. It’s a more involved game effect, for sure, but nothing that makes the timing rules function differently here. — Death by Chocolate · 581 9/3/20
7

DeathbyChocolate's inspired jankery aside, 4 XP and 4 Resources are nothing to sneeze at, but a more or less guaranteed 9 damage, plus bonus effectiveness from Oops!, Oops! (2), and/or Act of Desperation allowing you to get maybe 20 damage across 2 turns is pretty good for a Survivor combo. And, with Scrounge for Supplies and Resourceful, you might be able to get most of the parts of the combo back in your hand for another go.

Slightly more seriously, comparing it to Old Hunting Rifle, its +1 XP, + 1 Resource, and -1 seems about right for its considerably better consistency. I have my doubts the 1 Damage Fail effect will be used much except in dire emergencies, but it's nice to have options.

I don't see Ashcan, Wendy, or Patrice packing this (although a chainsaw in a viol case is a striking image), but Silas and Yorick might well consider a trip to the hardware store, with Stella and Rita more on the fence.

LivefromBenefitSt · 333
The dream is to teamwork this onto Joe Diamond so he can hold it in his shoulder holsters. — SGPrometheus · 278 9/4/20
For Yorick, Well Prepared can help make up for its low combat bonus. For Patrice, not being able to equip the violin seems prett rough, but otherwise she can use Chainsaw + Cornered for serious consideration. I think the biggest 'real talk' about Chainsaw is that it is a 3 damage weapon that can be directly reloaded with Emergency Cache (3). No need for a Venturer playing middle-man. — Death by Chocolate · 581 9/4/20
Wow! I had not even considered the Cache angle! That's very nice. — LivefromBenefitSt · 333 9/4/20
SGPrometheus -- I had considered suggesting Bandolier (2) in Yorick, so he could have a lantern, a shovel, and a chainway all strapped to him as he yelled Shakespeare like he was Patrick Stewart chewing the scenery! Then I thought that was too silly. — LivefromBenefitSt · 333 9/4/20
Nothing is too silly. — SGPrometheus · 278 9/5/20
Contraband also works (i guess it also runs with alcohol) — Django · 3165 9/6/20
Track 5 will not be called Chainsaw Juggling, and this is not Track 5 — Zinjanthropus · 155 1/8/21
3

I think this item will make Yorick good for multiplayer as main dmg dealer again. This was exactly what he was missing!

Act of Desperation should be your main interaction. You will use it to gain resources back, get finishing hit and play it back into your play area for free. How does this work? AoE first discard Chainsaw and after the fight is resolved Chainsaw should be already in discard pile to pick it up with Yorick ability back.

Then you can use Resourceful to get your AoE back. In emergency case it should be of course used to get back Chainsaw directly (even if less effective)

Still not enough charges ? Use Emergency Cache to put up to 4 charges into your Chainsaw.

Still not enough charge? Cheeze it out with Versatile + Contraband 3 base +4 from cache doubled by Contraband for 14 supplies thats 42dmg in your disposal by 3 card combo that cost 8 resources. Who can do that? :)

Not forget that Chainsaw has 3 icons for Well Prepared You will test for 9 without any other buffs.

If you just count how much dmg you can put into your deck with all those interactions its getting pretty crazy with how consistent it could be.