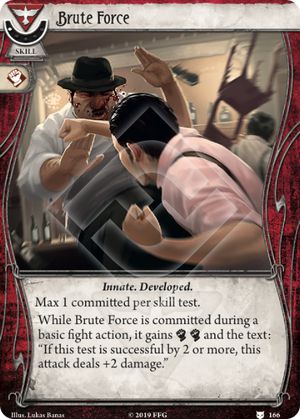 A lot of people have been talking about using Brute Force as a one-off, "in-case-you-need-it" card, and that's true, it's only good in a pinch if you're playing as most investigators. But if you are playing as Silas Marsh? Just throw away one of your weapons, because you won't be needing them as much.

The majority of enemies in this game have around 2 health, maybe 3, and occasionally 4. With Silas's base 4 , he's going to get 7 minimum, which means on Standard he's going to easily succeed by 2 or more most of the time and land 3 damage. And after you land that 3 damage with Silas, use his unique ability to return Brute Force back into your hand so you're ready to punch another cultist.

In the unfortunate case that you lose Brute Force, either through a random discard or because you had to REALLY punch SUPER hard this turn or what have you, there are many options to get it back. This includes Silas's ability, of course, as well as cards like Resourceful and True Survivor.

I suspect that Brute Force may become less useful the more players you have, but for what it's worth, I tested it in a 3-player Return to Dunwich campaign with an investigating-focused Luke Robinson and a fight-focused Leo Anderson, and with Brute Force along with Sharp Vision, I was basically able to do everything that the other two players were too busy to take care of. By the end of the campaign, I only used my Meat Cleaver to commit to tests. And plus, there's nothing more satisfying than punching a cosmic horror with nothing but your bare fists.

doctorcello · 4
Great write-up!!! I feel compelled to note that Silas’ reaction ability makes it so that you lose the skill boost and non-lasting effects of committed — Sycopath · 1 9/22/20
Skills. So in the case of brute force/resourceful you have to leave the card committed to benefit from the bonus damage or recursion. — Sycopath · 1 9/22/20
Yeah, this sounds like a misunderstanding of Silas - if you use his reaction, it's as if the card hadn't been committed at all. The ability is insurance against wasting good skills on autofails or tests you would've passed without them. — TheNameWasTaken · 3 9/22/20
@Sycopath @TheNamesWasTaken Alright so it looks like I completely misunderstood Silas's ability, which is super embarrassing and also sad because I thought I had stumbled onto something good lol. I need to rethink all this. — doctorcello · 4 9/22/20
Combo aside, I still found a pair of Brute Forces to be great in Silas. I ran him as a primary investigator, but between Brute Force and Resourceful, I could help out a fair bit with damage when it was needed. — Death by Chocolate · 712 9/23/20
How do you run Silas as an Investigator? — OrionJA · 1 9/27/20
Having a copy of Brute Force in your discard pile is quite nice if you're also running Eucatastrophe (and why aren't you running Eucatastrophe?). — Darthcaboose · 210 10/30/20
2

There is a slew of characters that can dependably land any sort of skill test they desire, often via judicious skill use and test manipulation like Lucky! or Live and Learn. For them landing a Brute Force is child's play, even from a startpoint of just 1 or 2 base . Its even easier for the characters starting at 3 or 4.

Silas Marsh particularly can thread the needle and land 3 damage on every Brute Force he plays.

Static buffs, skill cards or Cornered will greatly help land the bonus damage too. Also give extra consideration to it in latter campaigns, where 3 health foes are more commonplace.

Brute Force can be a brilliant backup or addition to a deck that fights with 2 damage weapons (most 1 hand weapons), if you cant find a weapon the punch can tide you over and you can use it to nail an odd-health foe in less actions then a 2-damage weapon would. It can save a bullet and it costs no resources!

Tsuruki23 · 1971
It's a great splash option for Tony Morgan since it enables other "succeed by"s, and I quite enjoy it for William Yorick in solo but probably would've take it in multi. — StyxTBeuford · 12423 3/26/20
wouldn't've * contractions are hard — StyxTBeuford · 12423 3/26/20
Minh with Dream Diary. Wendy with Trial by Fire. Preston with Well Connected/Money Talks. Rita with good old Overpower. It might be more for evade-first solo gators or funky cluevers and require some combo work but it's an excellent card that will see a ton of burn. — housh · 108 3/27/20
I agree with the comments here; generally, converting several actions into one is great. Converting several Fight actions into one is extremely great because the devs seem to value Fight actions higher than any other. Dedicated fighters will have better options with greater reliability, but evaders and support characters can run this as their "I have one way to fight if I need it" card and it doubles as help for the tank. Very strong. — SGPrometheus · 506 3/27/20
Most weapons deal 2 damage, so options to remove 3 or other odd hp stuf is quite useful. — Django · 3448 3/27/20
0

more icon and more space for other class card

icanflysohigh · 1
This doesn't combo with Duke. A basic fight action is a fight action you take without activating any card. Activating Duke's ability is activating a card. — Yenreb · 9 12/31/19
Yeah, a basic fight action would be Ashcan fighting at base combat 2 (plus other constant boosts like Jessica Hyde if he has any). Using a weapon or any asset (including Duke) or event with the Fight keyword is no longer a basic fight action. Therefore Brute Force is a pretty bad Ashcan card. Silas and Tony on the other hand love it. — StyxTBeuford · 12423 12/31/19
but duke ability is only changing your base value,doesent that mean you are still perform a basic fight? — icanflysohigh · 1 12/31/19
No, it's a basic action only if you're not using another card to initiate it. Like a basic investigate action: Using Flashlight would not count as a basic investigate action. — StyxTBeuford · 12423 12/31/19
why duke ability isnt +2 attack and +1 damage ? — icanflysohigh · 1 12/31/19
like normal asset? — icanflysohigh · 1 12/31/19
When you use Duke you are using the action abilities on him. He has an Investigate action and a Fight action. Because these are actions written on a card, they are not basic. It's only basic if you initiate it yourself, aka without using a card action. — StyxTBeuford · 12423 12/31/19
@icanflysohigh Because Duke isn't a weapon Pete is using to enhance his abilities (bonus to base stat). Duke is doing the fighting himself (separate base stat). If you boost Pete's base stats directly (e.g. The Red Gloved Man, Trial by Fire) Duke's fighting ability doesn't change. — Yenreb · 9 1/1/20
This is basically a get out of jail card if you ,run out of baseball bats or lanterns to chuck and the monster still has one or two damage points left. Fisticuffs as the title suggests. — bern1106 · 2 1/16/20