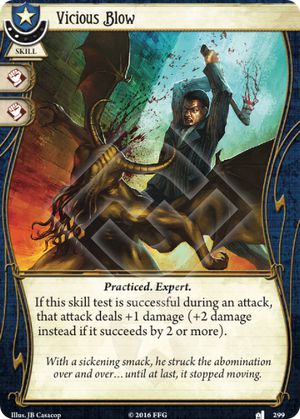 There are only so and so many enemies that will come your way per scenario, and Vicious Blow is one of those major tech cards that can bridge the gap and turn a risky fight into a trivial one, and keep you ahead of the enemy curve.

Picture this: You've got a .45 Thompson in play with 2 shots left on it and Vicious Blow in hand and a 4 hp enemy shows up, you could shoot it twice with the Thompson, or you could save the ammo and the action and try to kill it outright. The saved bullet then goes towards killing a (probably) smaller 2 or 3 health enemy later.

While the +2 prerequisite can be risky, the added + tick offsets that quite a bit.

The power of your main weapon directly affects Vicious Blow, a Lightning Gun lands that +2 damage more routinely then a Machete, in a pinch a simple buffed punch to deal 3 damage can solve a LOT of problems. Especially in Forgotten age where 3 health foes with reasonably low fight stats are all over the place.

I highly recommend you get Vicious Blow in your deck when you're in the mid-campaign, once you've put in the key tech at 10-15 XP it's probably time to upgrade this one.