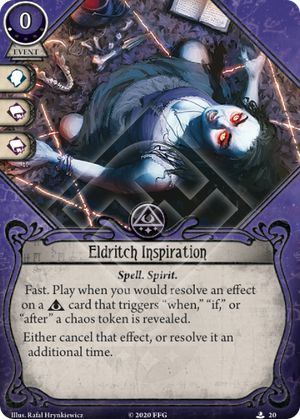 suika · 7574
I literally do not understand this card at all. Or rather, what differentiates it from it's lvl 0 version. I guess you can use it on your investigator card? Father Mateo could make great use of it, but he can only use his ability once per game. — LaRoix · 1440 12/17/20
@LaRoix The difference is that the upgraded version can react to any token; I can't think of any effects that would react to the number tokens, but it can get elder sign, bless and curse reactions, all of which the level 0 version would miss. — TheNameWasTaken · 3 12/17/20
It seems like it pretty much extends the card to Jacqueline's starter decks's "if you reveal a nice token cards", the In Too Deep suite of spells that key off blessings and curses and elder sign effects? Plus maybe Recall the Future? That would work, I think. So I think , leaving aside the weird corner cases, if you're building around Jacqueline's spell suite or the In Too Deep curse suite then it's a meaningful upgrade. But it's hard to really evaluate it without knowing what bless/curse mystic cards turn up in the future. It seems like a card that will either see more use as more and more compatible cards get released or disappear if they don't .... — bee123 · 24 12/17/20
With Favor of the Sun/Moon just spoiled, enabling guaranteed bless/curse draws, respectively, this gets pretty strong with the curse spells. — SGPrometheus · 506 12/18/20
Father Mateo can chuck Seal of the Elder Sign and this to get two extra actions and a guaranteed success on demand, though it's more situational for other investigators: Akachi won't say no to an emergency recharge in a pinch, nor Diana to playing more cancels, or Luke to more Gate Box charges. — suika · 7574 12/20/20
2

They fixed the wording from Eldritch Inspiration, adding the "when," "if," or "after," and it now triggers regardless of the token, making it work with the "good stuff token" cards in Jacqueline's deck. That seems worth the 1 XP.

In the spirit of the 0-cost review:

I am not entirely convinced that canceling the bad effect on Parallel Fates , Recharge (2), or Recharge (4) wouldn't get you the "otherwise" effect, since you don't do the canceled part of the text, and "otherwise" follows, but I am sure I will be schooled on this. Also, Sixth Sense (4) seems wild with this.

Sadly, it won't work on Voice of Ra.

LivefromBenefitSt · 613
Also works with the new Armageddon: 2 extra damage or 2 charges. — SGPrometheus · 506 9/15/20
Do note that the "when/if/after" wording applies to the level 0 version per errata. — Yenreb · 9 9/15/20
I'm not sure I follow. I get the new spell suite that scales off of "good" tokens, but other than that, it looks like the base version effected virtually every other card. Like how does this enhance Hypnotic Gaze beyond EI lvl 0? Or Recharge? Or Sixth Sense? Those are all the same, the upgrade does nothing. What am I missing? — LaRoix · 1440 9/15/20
That’s about it, honestly. 1 XP to hit any token draw effects. The list above are cards released since the last card review. — LivefromBenefitSt · 613 9/16/20
To add to this, this will trigger off of the some new mystic cards that trigger when you reveal a bless or cursed token. e.g. Eye of Chaos — toastsushi · 62 9/20/20
Some things in this review don't seem wholly correct. Eldritch Inspiration (0) works on The Cthnonian Stone (2), Hypnotic Gaze (2), and Wither and Wither (4) just fine. If you just wanted to cancel/double the effects on those cards, then you do not need to upgrade Eldritch Inspiration (0) at all. Also, regardless of which version of Eldritch Inspiration you choose, Eldritch Inspiration doesn't let you investigate at 2 locations connected to you with Sixth Sense (0) because the choice of another location on Sixth Sense (0) is a replacement effect. — iceysnowman · 149 9/23/20
I just included the cards that were not covered by the previous review. Are you sure about sixth sense? If you are triggering it twice, it seems like you could choose two different locations. — LivefromBenefitSt · 613 9/23/20
I don't see it listed here, but I think Guts (level 2) would also be enhanced. Allowing you to draw 4 cards if your test was successful. — Tanz444 · 7 4/14/21
0

So, can this be used to double elder sign effects? I have seen a couple people claim this but it wasn't widely agreed upon. If so this is a fantastic card for father mateo.

This is a secret filler for 200 characters :P

jonklin · 510
While investigators could be considered mystic cards, elder sign effects would need to have a triggering condition of "if" "when" or "after", there is currently only one such mystic elder sign and it is Jacqueline fine's elder sign that triggers if the elder sign is cancelled. — Zerogrim · 171 2/19/21
Elder Sign effects are by definition triggered "if" an elder sign is revealed. "If this token is revealed for a skill test, resolve the [elder sign] effect on the investigator card belonging to the player performing the skill test." So I would think yes. — suika · 7574 2/20/21
The thing about that argument, though, is that the line that has the "if" (the quote) is a game rule and not a card effect, and it only indirectly resolves the elder sign effect — Thatwasademo · 36 2/21/21
My interpretation is that nothing says the "if" needs to be on a mystic card, just that the effect must be on a mystic card, and the triggering condition for the effect must be when/if/after a chaos token is revealed. There could be an alternate interpretation that the when/if/after must be on the card itself, but I don't see anything that would support such an reading. — suika · 7574 2/21/21
Unfortunately, I don't think this works. The corollary is Defiance, which ignores token effects but not effects which trigger based on the "revelation" of a token. I.e. shrivelling dealing you horror etc. Gator elder signs are not by definition "IF an elder sign is revealed," when/if/after effects are in response to a token being revealed regardless of the token's effects themselves. So unfortunately not even Jackie's elder sign is eligible as the effect of the E.S. is simply +1 and the cancellation/ignoring must come from a different source. — Sycopath · 1 2/21/21
That's persuasive, though while Defiance makes such a distinction, nothing says that Eldritch Inspiration has make the same distinction. It's self-consistent to interpret effect of a token be "if revealed, do X" and for Defiance to ignore this effect, and for Eldritch Inspiration to work on also work on the effect. Although again, nothing supports such an interpretation. — suika · 7574 2/22/21
Revealing a token and trigger when a token is revealed are two different things. if you ignore/cancel it's effect, the token is still revealed and can trigger other abilities. if you cancel/ignore the token, it is as if it was never revealed. — Adny · 1 2/22/21
And I agree with suika's interpretation. Nowhere does it say, that the 'if' must be on the card. — Adny · 1 2/22/21
'If' triggers happen at the time a thing happens, after 'when' and before 'after' triggers for the same timing point, and at the same time as 'at' (and 'as' and 'each time' as best I can tell). But the Elder Sign chaos token effect initiates in Step 4, while the chaos token is revealed in Step 3. The 'when', 'if', and 'after' triggers Eldritch Inspiration reacts to all proc in relation to that step 3 timing. The 'if' used in 'Chaos Tokens' for 'Elder Sign' therefore must be informal, since we know the effect actually initiates in Step 4, *not* at the time abilities that really trigger 'if' a chaos token is revealed would trigger. — Yenreb · 9 2/22/21
@Yenrub agreed, I think step 3/4 quite definitively shows that chaos token effects are distinct from on reveal effects that Eldritch Inspiration is meant to apply to. — suika · 7574 2/23/21