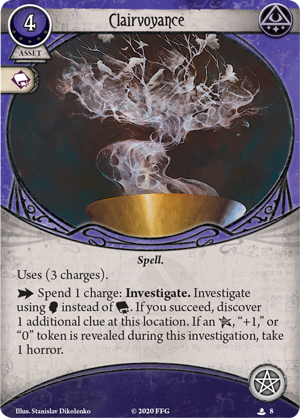 Finally, a spell for Mystics that compresses Investigate actions and doesn't run the risk of flubbing your whole turn. I think most mystics will prefer this over Rite of Seeking for two reasons: 1) There are generally fewer and +1 or 0 tokens in the bag than there are bad tokens, and 2) Taking 1 horror is a thousand times better than losing all your actions for every single mystic. Big winners here are Agnes, who can ping baddies while also picking up clues, Marie, who appreciates not losing her extra action in addition to her whole turn, and Jim, who can occasionally avoid the horror by treating the as a and who can clear horror with his trumpet. Agnes in particular pairs this with Shrivelling to get extra damage whether she fights or investigates, as long as your draws are good/bad enough. I think this is a very strong card, and is significantly better than Rite of Seeking. Can't wait to use it.

SGPrometheus · 593
I don't think Agnes likes this much. Yeah she sometimes gets bonus damage. But only if there is an enemy at her location. Provided that enemy isn't aloof he will get attacks on her everytime she investigates. Not a good trade at all. But if there is another character at her location, who has that enemy engaged, it might be worthwhile to let Agnes go first it case she gets extra damage while investigating. — Skeith · 1644 4/3/20
To be fair, I think she likes it at least as much as Rite of Seeking 0 in the overwhelming majority of cases. — jaunt · 4 4/4/20
@skeith there's also a large amount of scenarios where there are aloof enemies at your location, which you could ping while investigating. — SGPrometheus · 593 4/6/20
I also wouldn't consider the Horror strictly a bonus for Agnes, because it comes unreliable at random, when you likely won't profit from it. For other Mystics, that don't consider Horror a preciouse resource, this looks actually better. Also, there are workarounds to use RoS without loosing actions. Still, this card looks slightly better, but it also should do so. The upgrades are 1 XP more expensive. This is particular a huge thing for off class Mystics like Sefina, who can't take the level 3. (Of course, Daisy does not care.) — Susumu · 165 9/23/20
1

Another routine investigation spell, the lineup of options now includes Rite of Seeking, Sixth Sense and Clairvoyance, a good lineup!

Taking horror is not a problem, not much of a problem at least, you might shy away from using Shrivelling (enter Azure Flame or Wither) or you might teck in Horror healing via Fearless to balance things out.

If you mix the clue spell assets in one deck to have 4 or 5 cluegetter spells your ability to clue will rival a , this sort of dependability is something that the faction hasnt had insofar. The future is bright for the class.