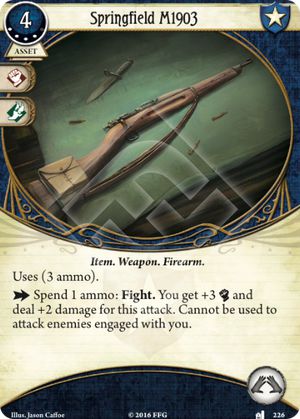 This card has a lot of advantages that get overlooked. First, you are going to see a lot more play out of those icons than the ones on a Lightning Gun. Second, this really takes the teeth out of a lot of treacheries. You will start to see the likes of Crypt Chill as a blessing if they can take the Springfield away. Last but not least, the ammo conservation of never being able to fire the gun puts Shotgun and the BAR to shame.

Sadly the two hand slots compete with the Kukri, but with bandana you can now take them both.

Jernau Morat Gurgeh · 28
Kukri taboo when? — StyxTBeuford · 1265 12/6/19
That's pretty funny. All joking aside, I wonder what XP cost would make this thing worthwhile. As printed at 4, certainly not. The Taboo List knocked it down to 3--still not enough, I think. Maybe 2 XP is about right? I'm pretty confident that if it was only 1 XP (or certainly 0 XP) it would see quite a bit of play. — CaiusDrewart · 1744 12/6/19
I think it nees to come down to a level that off-class guardians can take it, because primary killers can never be restricted to only fighting enemies engaged with other players. This card was basically just a massive whiff, and the only card we've seen so far that attempted to synergise with it was even worse. A bizarre blind spot in an otherwise flawlessly constructed game. — Sassenach · 100 12/6/19
It would be indeed a good weapon for Skids! — mogwen · 146 12/7/19
Honestly for Skids I think it would be too expensive, and he wants a hand free for Lockpicks. I wouldn't take this in level 0 Skids honestly. — StyxTBeuford · 1265 12/16/19
I think 2XP is correct. Compare to upgraded .45 Auto and to upgraded .45 Thompson. For 2XP, it can be taken off-class, and works OK in multiplayer. — duke_loves_biscuits · 631 4/14/20
16

A) You need to be firing at enemies that you've evaded, blue player's aren't very good at evading, basically requiring large resource expense or card dedication (and blue player's don't have many evade options). Besides, evading an opponent is an extra action, you'dd be far better off just throwing another attack at the intended target with a Machete or something.. B) You might also be firing at enemies engaged with your allies. A sub-optimal circumstance because now you risk friendly fire AND, as the blue player, it is your job to keep enemies occupied in the first place! If your clue specialist has to spend all his time babysitting your next intended kill then he wont have time to do his job! C) It costs 4 xp! For just 1 more you'dd have a Lightning Gun! Although it's 2 resources more expensive to play it pay's for the difference with 2 extra attack power on every attack (Hitting a rather nice sweet spot of 9 attack total on both current Blue characters.) Also it doesn't have the circumstantial clause.

This weapon sucks, plain and simple. It should cost 2 or 3 XP and be neutral, that way a non-fighter might consider taking it. Often the fighter will find himself stuck in a flood of enemies that he is tanking on behalf of the team, when the going gets tough however the clue specialist has to come running with a Shrivelling or Strange Solution to untangle the battle. A weapon exactly like Springfield M1903 would be perfect for that specific circumstance, sadly this is NOT that weapon.

Say hello to the sniper rifle of Arkham Horror. It's a fantastic weapon if you're firing at a distance and a fish bicycle if anything comes within hands reach.

So, is the Springfield a good weapon or a bad one? Well, it's not awful but its situational as heck. Since its twohanded, you'll either stick to this gun alone or invest in Bandoliers. And by the time you have paid for those bandoliers, you might as well have just bought a Lightning Gun or a Shotgun.

Who can make best use of the Springfield, then? Zoey probably, since she's not that reliant on weapons. She can use her fists and Cross to murder monsters engaged to her, and then shoot anything else from safe distance. It's a really bad fit with her ability to gain 1 Resource when she engages an enemy, however.

olahren · 544
To me it's as simple as this: Don't play this card when playing solo, it sucks in solo play. But is does fit a playsyle in wich you plan on babysitting a dedicated cluehound in a multiplayer game. — Heyenzzz · 2530 8/18/17
But why not just use another weapon and engage the enemies yourself..? Yes, you can let the cluehound engage every spawn/hunter, but you have to stay at her location each encounter phase and you risk friendly fire. Daisy can't take much friendly fire. — olahren · 544 8/18/17
Even if your goal is merely to protect a "dedicated cluehound," the Springfield is massively inefficient compared to the other big weapons. What if you draw a high-health enemy yourself? Then your options are 1) evade it and then shoot it (even in the best case scenario this wastes an action), or 2) have your Seeker buddy come take the enemy (this wastes one of their actions and they risk massive damage on friendly fire unless they waste another action evading). Sorry to say it, but this card is just worthless. Fork out a little more cash for the Lightning Gun. — CaiusDrewart · 1744 8/18/17
Also, a correction to OP: the Springfield is NOT effective against aloof enemies. It cannot attack them when they're unexhausted and unengaged any more than any other weapon can. It's actually worse against aloof enemies, since you'd have to spend an action engaging it and an action exhausting it, and THEN you can use the Springfield. — CaiusDrewart · 1744 8/18/17
Worse than that - Aloof enemies can't be attacked at all when they're unengaged, whether they're ready or exhausted. So aloof enemies are completely untargetable by the Springfield (barring losing aloof e.g. with Mind Wipe) — LeonardQuirm · 29 8/19/17
Ah yes, that's absolutely correct. Ouch! — CaiusDrewart · 1744 8/20/17
Caius: You are totally right about Aloof! I really misread the rules there. Wish I could edit the review, but that's not possible :( . — olahren · 544 8/21/17
I Said the Springfield "fits" a certain playstyle, I didnt say its currently the best option for that playstyle. In the early state of the lifespan of this game the developers are laying the foundation for different build-archetypes and this card fits the archetype I described. Not the best card at the moment, but with the card pool ever growing, this could turn out to be a more solid archetype in the future. — Heyenzzz · 2530 8/24/17
Honestly, i feel like this weapon needed a FAQ/Eratta to be worth taking: Fight. You may attack an enemy up to one location away. Cannot be used to attack enemies engaged with you. — CecilAlucardX · 3 1/31/18
This not only makes it worthwhile, it actually fits thematically; the M1903 has an effective firing range of about 1000 yards. That should be well within most location distances. If i can chuck Dynamite that far, surely this gun can shoot that far... right? — CecilAlucardX · 3 1/31/18
"Honestly, i feel like this weapon needed a FAQ/Eratta to be worth taking: Fight. You may attack an enemy up to one location away. Cannot be used to attack enemies engaged with you." - Yes, exactly. I'd also like to see it able to attack non-aloof enemies at adjacent locations, or aloof enemies at your own location. Then we have a real niche for this weapon to fill. At least there's (faint) hope that they will release a 5-xp version with this text at some point. — Low_Chance · 4 5/14/18
This card got a smidge better with the release of Marksmanship. Still, 2 Resources and 1 XP just to be able to reliably use the Springfield ONCE is not a great deal. What we really need is a weaker talent (asset) version of Marksmanship or an upgrade to the Springfield that would allow you to shoot 1 zone away. — Daerthalus · 5 6/18/18
Aloof enemies can be damaged from effects that damage enemies at your location such as Dynamite or Agnes' free trigger ability. I think the rules do confirm that you can't shoot them with the Springfield, but it seems nonsensical when there are effects that do damage enemies at your location, Aloof or otherwise. — LaRoix · 2 5/2/20