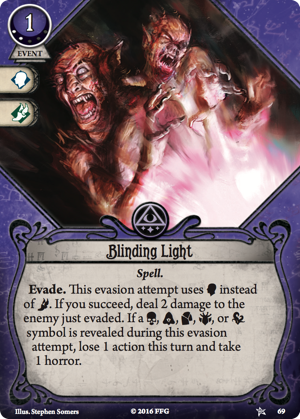 General thoughts about the spell's usability can be found under Blinding Light(0).

So, what has changed between the two versions? The additional cost of 2xp have to be put into relation to the additional effect that the upgraded version gives you.

This makes Blinding Light(2) a very potent backup for Shrivelling/Song of the Dead. The major interaction for Agnes Baker i see with Forbidden Knowledge, allowing her to reliably dispatch 3 health enemies.