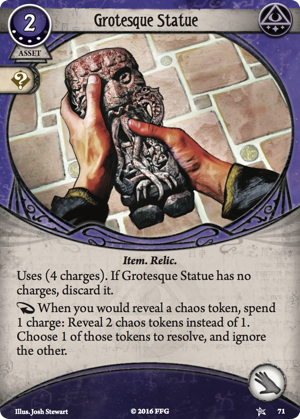 There's something to be said for the simple cards. Tentacle mouth guy is one such card.

Let's look at the numbers: 2 resources for 4 charges and a single hand slot, plus a ? icon, for 4xp. All tasty apart from that xp cost, both because it limits which investigators have access to the statue, as well as being a hefty investment in itself. That said, cards don't at the moment tax hand slots particularly, so adding bonus hand items isn't particularly punishing. Moreover, while in a scenario, paying 2 for 4 'double' draws is incredible value. As with all abilities, it's optional, so you can pick which tests you want to use it (before drawing the chaos token). And, by way of comparison, consider Wendy's 'redraw' ability, which, yes, is theoretically limitless, but costs a card for each redraw and, crucially, does not allow a choice between the two tokens (the second replaces the first - and could be the very same as the first).

One simply shouldn't underestimate the potency of choosing to double dip into the chaos bag. Even on tests where an investigator is feeling confident, being able to choose, for example, a instead of a -1 to trigger further effects (such as Agnes's ability) or vice versa to avoid them is incredibly powerful - after all, the statue is in the same faction as spells, from Shrivelling to Blinding Light, which come with additional risks for non-numeric tokens. Choice is crucial here: a normal skill test requires an investigator to overcommit to aim to mitigate the vicissitudes of the chaos bag; an investigator with the grotesque statue can, in a pinch, give themselves options, and options = power.

I’m having a bit of a hard time quantifying the strength of this effect. It seems like it has about a 50% chance of combining a bad token draw with a good one, thus giving you a great choice. Two good tokens or two bad ones drawn together is not as helpful. Also it seems to be better on higher difficulties, where the difference between good and bad tokens is larger. But I think the card might be a bit overrated because of the high XP and the significant chance of drawing two similar tokens.

jmmeye3 · 286
When your odds of success are decent, it's worthless. When your odds of success are terrible, it improves them vastly. Turning your odds from 1/15 to 2/15 is not insignificant. — SGPrometheus · 226 2/8/19
It's also great for tests you HAVE to succeed and negate the autofail. — Django · 2661 2/8/19
That's not how the math works, though. In a theoretical bag of 15 tokens, on a test where you only fail on three of them, the statue brings your chances from 80% up to 96%. If you only succed on three tokens, you go from 20% to 36%. Personally, I'd rather almost or totally guarantee a critical test than slightly increase my chances on a bad test. — Garou · 1 2/12/19
...before anyone calls me on it, my math was wrong. First example gets you from 80% to 97.2%, second example goes from 20% to 37.1% — Garou · 1 2/12/19
It seems like the value of this card varies greatly depending on your token bag and the particular nature of your draws. In something like Curse of the Rougarou, it is *far* better to fail a test than pull a symbol. For Agnes, getting a symbol that you can still use to pass on a Shrivelling is sometimes ideal. Conversely, sometimes you'd rather miss with Shrivelling than take the horror. — Ergonomic Cat · 31 9/13/19