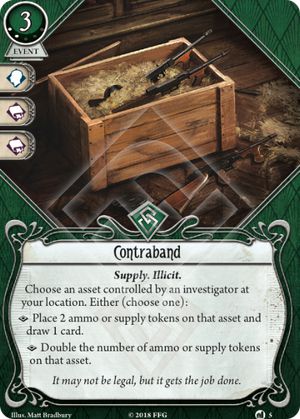 Sure, lemme try an analysis.

TL;DR: This is a great upgrade to Contraband 0xp, and is a powerful card in a vacuum... but unless I'm missing something, it's overshadowed by the same-priced, same-XP, far-more-reliable Swift Reload.

As an upgrade, this one is great. 1 less resource saves early setup actions, and even puts it in Turn-1 range for the BAR, Flamethrower, Rogue's .45 Thomspon, or Typewriter via either Emergency Cache (STTP Leo Andersen) or Another Day Another Dollar (any Rogue).

Now for the problem: Swift Reload. Huge similarities- cost, XP, class. Leo can even STTP them both. The difference is a chasm of flexibility in maximizing their effect.

IOW, Swift Reload lets you "pay later", and only when you NEED to- even mid fight!- to get the same effect that Contraband (2) requires you to pay for up-front, spending an action (and possibly AoO), and which you may not even ultimately use.

Now, that's if they're played by themselves. Enter the Contracombo!

Yeah, you know what I'm talking about- the famed 2x Contrabands = 4x Ammo, usually illustrated on Leo/Zoey's BAR for 32 whopping bullets- a profit of +3 clips/+24 ammo. And you don't need two Contraband (2) specifically; anything that can overload ammo (Venturer, Custom/Extra Ammunition) can tilt a single Contraband (2)'s payout over SR.

But when it comes to reliability, the Contracombo takes Contraband (2)'s situationality and makes it worse. Supposing the ideal, that 32 bullet BAR, you need:

... and you pretty much need them all at the same time.

Swift Reload can't really combo... but to get a max profit of +16 bullets from two of them, you just need the weapon- purchased & used as needed- and then one SR + 3 resources to reload when/if it empties, and another SR + 3 resources when/if it empties again, likely spread over several turns. Drawing the SRs late doesn't reduce their value, and you still net +2 clips.

And that last bit's kind of the clincher, as obvious as it may seem: the perfect Contracombo is kind of an illusion. It doesn't give you +4 clips, it gives you +3 (you started with 1)... and that's only 1 clip more than you get by actionlessly Swift Reloading as needed.

Of course there's a few other asymmetries- Contraband (2) has much better pips, it can grant Supplies instead of Ammo, Jenny can't Swift Reload her Twin .45s, you can tutor Contraband (2) with Backpacks/Smuggled Goods. EDIT: And in MP, Contraband (2) can be used on allies (thanks to MrGoldbee for spotting this!).

But for its purpose of getting lotsa bullets, it just feels like Swift Reload will win out more often.

HanoverFist · 437
Unless you reload your friends! — MrGoldbee · 1148 8/16/20
Excellent point! Contraband can reload allies in MP. — HanoverFist · 437 8/16/20
I think you covered it pretty well, Contraband has higher combo potential, and can reload more than just guns (Fingerprint Kit is a good one). A few other combos include Fence (makes Contraband and most weapons fast), and also the fact that you can dig out both copies of Contraband with Smuggled Goods, and recur one of them from the discard later (though that can be better or worse depending on when you draw it.) — Zinjanthropus · 185 8/17/20
Or you can empty your gun while gathering 2x contraband, then start with Swift reload and quadruple that — Django · 3807 8/18/20