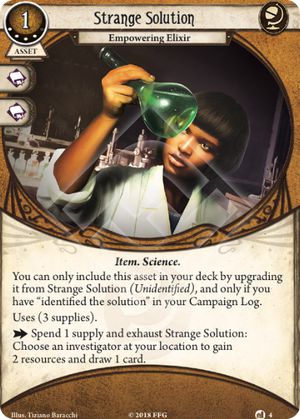 This is a very interesting addition to the Strange Solution family of cards. At first glance, I think I like this variant, but we have to compare it to the three existing versions in addition to looking at it on its own.

By itself, it's a card and a resource (along with the setup required with the L0 Strange Solution card) and four actions for 6 resources and 3 cards. While trading six-for-nine may not seem like the best economy, the advantage here is that you can spread the resources and cards around in a multiplayer game. This could lend itself quite well in a Minh Thi Phan support deck.

Strange Solution and Strange Solution set aside, the version most people take is Strange Solution (the version). With fewer players, and at a lower difficulty, I think the combat version will still shine. But at higher difficulties, or in a team with one or more combat-focused characters, the ability to pass around cards and resources could trump the need for powerful attacks.

Something to think about before automatically reaching for Strange Solution...

(This review brought to you by the words Strange and Solution!)

cb42 · 32
I definitely agree - Strange Solution is way better than Strange Solution or Strange Solution. It's probably on a par with Strange Solution though. — Spuddddddd · 112 1/26/19
Jokes aside, the combat version runs into problems at higher difficulty because combat 6 is not enough enemies with combat 4, which are quite common. Seekers don't have many cards to commit with combat symbols, so this is a great alternative if your team has a dedicated combat character. — Django · 3898 1/31/19
@Django - Well, my review wasn't meant as a joke, it's just hard to discuss five cards that have the same name without feeling a little silly about it. — cb42 · 32 1/31/19
0

I think that Return To The Dunwich Legacy is unique in that having it in your collection might make your deckbuilding more difficult as opposed to easier.

As for Strange Solution: Empowering Elixir on its own merits - I don't think it's the most useful version of Strange Solution out there. It's one action to draw a card and get 2 resources. You can do the action 3 times. It costs you one action, one card, and one resource to get it out into play. Of course, that's also not taking into account the other, less obvious costs: having to "identify the solution" on the level 0 Strange Solution (which costs one card, one resource, and at least 2 actions earlier in the campaign) and then 4 experience to upgrade into it. That sort of cost is fine with something like Strange Solution: Acidic Ichor because you're getting a really powerful weapon in a class that doesn't normally have access to firepower like that. By comparison, Strange Solution: Empowering Elixir is underwhelming.

An interesting card to compare Strange Solution: Empowering Elixir to is Stand Together. For one action, Stand Together nets your team +4 cards and +4 resources. It costs 0 resources to play and 3 experience to include in a deck. Strange Solution: Empowering Elixir gets you 6 resources and 3 cards, but it costs you 4 actions (the 3 to trigger the ability plus the one action to play it) and one resource to play the card. It costs one experience more than Stand Together to add to the deck, and you need to spend all the extra energy to to "identify the solution" to even use it in the first place! Maybe it's better to leave this kind of card/resource support to Stand Together Guardian investigators.

Unless support cards come along to make this card better, I think its primary purpose will be to make Shrewd Analysis a little more difficult to use than normal.

ArkhamInvestigator · 267
I think this is an ok card. It does mess up with Shrewd Analysis, but by any means, I don't think the designers were aiming to make Shrewd Analysis worse for Strange Solution. I think this card offers more options for seekers and boosts the support role further. The math doesn't quite work like you suggested on this card because you can play it on your allies (which is super important). Also remember that you don't have to go full Empowering Elixir when you upgrade Strange Solution, you can go 1 of Empowering Elixir and 1 of something else. — matt88 · 2396 3/4/19
And by the way, I 've built a Minh Thi Phan deck that leans towards the support role and uses Acidic Ichor/Empowering Elixir. Here's the link for whomever wants to check it out: https://arkhamdb.com/decklist/view/10379/minh-thi-phan-cluever-fighter-support-2.0 — matt88 · 2396 3/4/19