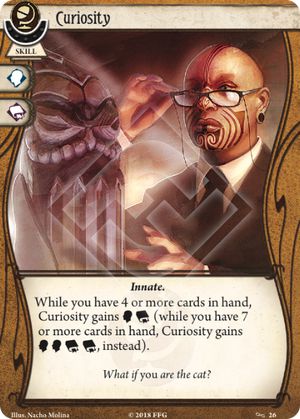 Awful, awful card. Out of all the TCU skill cards, this one ranks dead last. (EDIT: See below)

The problem is that 3 icon trigger. To get 3 icons off this card and therefore make it trump Unexpected Courage, you need to both have 8 cards in hand and then only commit Curiosity. This demotivates you from playing skill effects like Deduction or Eureka! as you drop an icon as soon as you commit any card alongside this one. If you only commit this card, it becomes 3 for 1 card, but if you want to commit anything else with 1 , you drop to 3 for 2 cards, which is abysmal for a skill card that only gives icons and has no other effects. To add insult to injury, with 8 cards in hand you probably do have something like Deduction or Eureka!, in which case had you run Perception instead, you'd still effectively get 3 for 1 card, but you'd also get the trigger of the other card you committed. Situational cards that you run for icons most of the time like Ghastly Revelation or Connect the Dots become worse as well, as again you're demotivated from using them when they're useless.

All of that was just analyzing this card for when you get the most value out of it- at 8 cards. This effect get so much worse once we take ourselves out of being at 8 cards. At 5 and 6, you really don't want to use this card with anything else, and if you have a particularly hard test to pass and need to commit your whole hand, be ready for this to drop to 1 icon. To add insult to injury, the icons it gives are the most common across Seeker cards: and . It's incredibly rare you'll ever need the flexibility of Curiosity being able to commit to either test when your hand is already that full.

That said, I can think of exactly one investigator who could use it. Minh Thi Phan needs skill cards, and she could run a heavy card draw strategy with Grisly Totem, Laboratory Assistant, Cryptic Research, Glimpse the Unthinkable, etc. all of which help Curiosity's stock go up. She can even run Able Bodied alongside it, which covers all 4 icons, and Minh isn't particularly item hungry either. Outside of that specific build though, you as someone with access to Seeker cards are spoiled for choice: Inquiring Mind might as well be 3 (and occasionally even better than that), Eureka! is crazy good card filtering, and Deduction is almost an autorun skill card in multiplayer for the tests it saves you. I would take all of those, Perception, Guts, and Unexpected Courage before I took this card.

Avoid. If it helps, you probably are not the cat.

EDIT: Well fast forward six months and already we have a way of making this card work. Dream Diary has an upgrade that depends on you having 8 cards in hand (it also gives you Essence of the Dream automatically every turn to facilitate this); Dream-Enhancing Serum helps you maintain duplicates, which is particularly great for Myriad cards; and A Glimmer of Hope can, on demand, help fulfill the condition as well. Again, this suite seems to point to Minh Thi Phan as the best candidate for such a build. I'd still say outside of such a build you should avoid Curiosity, but in this build it could be an absolute cornerstone, much like Cunning in a big money build. I'm happy the card might have found a place.

StyxTBeuford · 12422
In truth, most of that suite of skill cards are pretty meh. I agree that this is the worst, but Cunning isn't great either, and neither is Prophesy. Able Bodied is awful. The only one that I use is Steadfast, which has a pretty reliable way of hitting 3 pips and doesn't require you to wait a number of turns before you use it. I suppose the only real saving grace with these cards is that most of the time they'll be fairly consistently hitting 2 pips for 2 different skills. This makes them more efficient than all of the neutral skills bar Unexpected Courage so in theory may save you deck space elsewhere. Still not great though. — Sassenach · 136 8/17/19
I think I'd rank them as Steadfast > Cunning > Prophesy > Able Bodied > Curiosity. Steadfast is actually useful in people who like having Will and Fist icons e.g. Diana, Zoey, and Leo to some extent and, like you said, is on three icons turn 1 with no set up. It's actually a good skill card, but even there it loses out to Take the Initiative and often Vicious Blow, so it's sort of the skill you take after taking those two. Cunning I like in big money builds while playing without Streetwise because of Taboo. In those builds (a la Jenny, Preston, and sometimes Sefina) it can stay online really easily and needs just a few turns to set up, but otherwise between 5-10 it's a worse Unexpected Courage. Prophesy at least runs wild icons, and 3 doom is not a big ask to get essentially UC 3 and 4 that occasionally grows bigger than that, plus Mystic skill cards are generally pretty bad anyway. Able Bodied is okay for some very specific builds that like Agility and only run Track Shoes as their one item (so an evasive dedicated Wendy or a Duke maximizing Ashcan), but even there it's usually not worth building without Flashlight and Fire Axe or Meat Cleaver in your back pocket, and the fists are completely useless since you should be running more weapons if you plan to use fists (again, Duke kind of helps here, but it's still mediocre). — StyxTBeuford · 12422 8/18/19
The main difference between Steadfast and Able Bodied is that Able Bodied also requires a deck built around it to be more useful than just an extra Unexpected Courage and that's not something all investigators can swing (right now mostly just Pete, Silas, and maybe Rita). I would put Able Bodied and Cunning on the same bar of needing the right deck environment to thrive (although with the right build Able Bodied can be good throughout though Cunning requires some significant setup), but definitely Steadfast is the best of the lot (pretty much generally useful for all Guardians) and Curiosity is really quite bad. Meanwhile, Prophesy is weird in that its value fluctuates a lot with the scenario and also because unlike the other cards it's spelled with an S instead of a C. — pneuma08 · 25 8/19/19
I think the issue with Able Bodied is as you said it needs the right deck. The difference is Cunning actually has viable decks it can fit in, particularly with Jenny and Preston. Able Bodied is just hard to use these days when ever Survivor is taking Track Shoes, so any other item drops it down to UC level. There might be a viable itemless archetype later on, but it doesn't really exist right now. — StyxTBeuford · 12422 8/20/19
I personally think that's just the meta right now. Track Shoes and big money Rogues are the hot new things, not because they're better but because they're new, and that syngergizes with Cunning but runs counter to Able Bodied. — pneuma08 · 25 8/20/19
I guess you could also say that there are a lot of obvious synergies with big money cards, and so far there aren't any that I know of for having fewer items. And the benefit for Able Bodied isn't good enough to justify making it the central mechanic of a deck (unlike, say Dark Horse, which is in a similar boat). That said, there are plenty of archetypes that could certainly build in that direction, as a secondary or even tertiary bonus, and neither Cunning nor Steadfast fit that bill either (they would be included as a bonus, not a combo piece). — pneuma08 · 25 8/20/19
Big Deck is now here! — MrGoldbee · 1034 10/8/20
Indeed! — StyxTBeuford · 12422 10/31/20