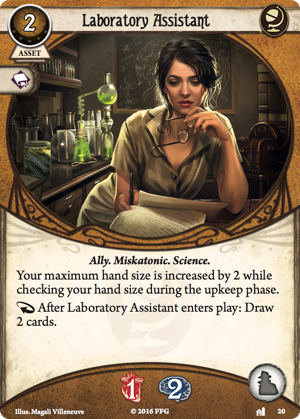 You start the game with 5 cards, 5 resources, and most scenarios are well over 6-7 rounds. This card will never take 4 actions to play and to suggest it would is absurd. The card has a pretty solid negative in my opinion: a single intellect icon isn't going to impress anyone. Losing a card for a single intellect point is pretty rough. But the benefits are quite nice.

First, she replaces herself and adds 1 card to your hand after she enters play, meaning you don't lose any skill test potential from committing. Second, she increases your hand size which, again, directly improves your potential skill test modifiers through committing cards. Finally, she provides an essential 2 Sanity for our mentally fragile investigator Roland Banks. Sure, Roland runs a little poor, so maybe spending money to draw cards isn't high on your to-do list.

Overall I think this card is a solid include for Roland. Keeping your hand size up and drawing cards is useful to make sure you have Vicious Blow, Evidence! and Shortcut in your hand for the exact moment that you need them. Sure, she is stealing the ally slot from Beat Cop and Guard Dog, but both of those allies have the potential to leave play when the situation calls for it. When your allies are more transient than someone like Leo De Luca (who you really don't want to die) then your deck has room for more allies. More allies with HP means you don't need to rely on evasion, and you can just take a hit once in a while. Who cares about your wimpy Assistant if you've got the police on speed dial?

PaxCecilia · 81
I have to disagree with your dismissal of the action metric for determining total card cost. Everything in Arkham Horror is relative, and it's a way to determining a single cost value for comparison purposes. The fact that you probably won’t have to actually spend all those actions is beside the point. — HollowsHeart · 17 2/14/17
Don't be fooled by her boobs, they're fake! — Django · 3448 2/17/17
She seems pretty good. You get a little bit of soak and also get to draw 2 cards. Also combos with Extensive Research, maybe, although that combo seems like it would be too much set up just to get 2-4 free clues. Of course, Maleson is cheaper to play (for slightly better soak), while Rook's ability is much more powerful. — Zinjanthropus · 160 3/4/20
3

If you have this card in play and play her again, do the reactions of both trigger because a card named " Laboraroty Assistant" entered play?

Edit: I have changed my mind about this card. If you got Charisma, she's pretty good, as you can have her in play with other allies (like Leo De Luca or Dr. Milan Christopher).

Depending if your deck/character (mostly jenny and rogue cards do this) is ressource focuced or not you may lose actions in playing her (she costs 4: draw her, gather 2 ressources, play card), but she's also a good damage/mythos defense (discard an asset or put X damage on your assets).

Django · 3448
Actually I've quite liked this card in Zoey or Roland decks as it A) let's them find their weapons faster B) provides them extra sanity and C) Their main allies (Guard Dog/Beat Cop) don't tend to last forever. — Orange Devil · 1 2/9/17
A wonderful ally in a Roland deck. — DadouXIII · 7465 2/10/17
This is a really weird analysis of this card. First up, you can easily go most (if not all) of a scenario without spending an action to draw or gain a resource, so the only action you should be considering is the one taken to play it. Even ignoring the hand-size increasing ability and the card draw, you also get a little horror/damage soak, which is nice as seeker too. — unitled · 1920 2/13/17
You're better off spending 4 actions to draw cards, than to play this one. Also all decks have better allies this this one (like the insecticist), so she's a dead card, if you can't play her. The rules about occupied slots are clear, in order to play a new asset, the old one has to leave. Also, if you really need her ability than your deck has too many dead (or circumstantial) cards. — Django · 3448 2/17/17
It doesn´t take 4 actions to play this card, does it? I see how you´re thinking, but as unitled said, that´s a weird analysis. It´s not a great card but in some decks she´s useful i think. To increase ones hand size might prove powerful in the future. Otherwise the designers could have left it with no upper limit, as in other LCG:s. — Vallandi · 1 3/2/17
It's just my personal opinion, but if you got more than 8 cards in your hand, you've got too many dead cards in your deck (like too expansive or situational). — Django · 3448 3/13/17
3

This card is now a corner stone in my Minh Thi Phan decks based on the combo Laboratory assistant + Dream-enhancing serum + Feed the mind.

Ideally I play the Serum, then the Lab assistant (having 2 copies of Studious help to have them both after the mulligan) to start my engine. Later, Feed the mind allows to draw a lot in a single action and have sometimes 12-15 cards in hand so that Minh has a solution to everything happening.

Of course, you end up drawing The King in yellow but with a hand full of skills, you should need one action to get rid of it !

Fundamentally, this card increases your hand size. So far, there's only 2 investigators where I've found the 8 card limit becomes a problem; Daisy Walker when she's using the Old Book of Lore each turn, and Rex Murphy when choosing to fail elder-sign tests, or using Search for the Truth.

For them, this card could be really useful. However, both can also take Dr. Milan Christopher, whose +1 and paying resources for investigating is probably preferable. He's a much stronger card.

However, at the right time, and with those investigators, this could be a useful ally for a part of the game. I think you have to see this as an ally you might want late in a game, similarly to how a Research Librarian is most useful at the start.

So, in short - possibly useful, but highly situational, and I'd only bother for investigators who can draw a lot of cards.

It's worth noting that in the Dunwich campaign you sometimes don't want to get too far through your deck, so getting a third of your deck into your hand is maybe not the best idea.

Laboratory Assistant + Calling in Favors is so strong to get allies into play. Work even better with Art Student and Charisma

Fireblaze · 2
I like it, but what happens if you draw the Beat Cop first, and the Assistant and Calling in Favors thereafter? Then you are stuck with dead cards with terrible icons. — duke_loves_biscuits · 894 8/15/18
Yes, a fine combo, especially with the upgraded Beat Cop. I think Art Student is better though; a clue is usually better than two cards and the handsize effect here is useless 99% of the time. But I can see how the right sort of deck might be interested in both. — CaiusDrewart · 2357 8/15/18
You can „heal“ upgraded beat cop with favors. Both lab assist and art student are great Horror soaks. — Django · 3448 8/17/18