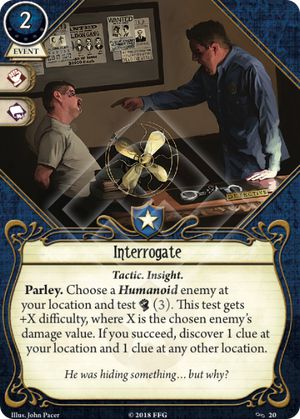 This card will seem more useful when you remember that parley actions, like fight and evade, don’t provoke attacks of opportunity. So even if someone’s coming at you with a butcher knife, feel free to ask them a few questions. And if you have handcuffs out to use, keep your new pal around as long as you need them. Turns out the real Arkham horror was the way you treat cultists!

This card is in a lot perspective similar to Scene of the Crime, that it is hard to not make a comparison:

Reasons to run Interrogate in addition to Scene of the Crime:

Reasons to run Interrogate instead of Scene of the Crime:

I'd love to see this combo with Wither. The mystic player withers the enemy to reduce it's fight value. And then your 'gator comes in, exposes its weakness while wearing Fine Clothes to make this a doozy test to pass for 2 clues.

Sure, Scene of the Crime might be more efficient and reliable, but this combo's more FUN, right? :-)

acotgreave · 89
Wither and Expose Weakness don't interact with Interrogate in any way. The Interrogate test difficulty depends on the enemy's damage value, not fight value. So you'd need the upgraded Mind Wipe for this. Fine Clothes do work though. — TheNameWasTaken · 3 4/29/19
D'oh. You're absolutely right. I'm seeing "enemy's damage value" and my brain is telling me "fight value". Oops. — acotgreave · 89 4/29/19
That's okay because the real combo (Mind Wipe 3 to reduce damage) is even funnier: Erase his memories, so we can ask him what he knows!! — Death by Chocolate · 712 4/29/19
I feel almost redeemed by enabling the discovery of that comedy thematic combo ;-) — acotgreave · 89 4/29/19