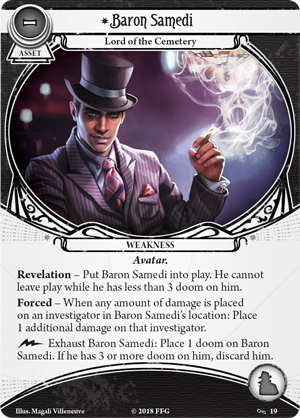 "Well now, we had a deal. You get to sing songs sweeter than ice tea on a summers day and I...I get you."

A weakness that is true to the character, a deal that seems amazing (you get Mystifying Song) that turns out to be not even close the price of purchase. Mystifying song, in a vacuum is an extremely powerful signature card, especially paired with arcane initiate but by god, is Baron a DEVASTATING weakness.

I would be so bold as too say that he has to be one of if not the WORST personal weaknesses amongst investigators to the point that he has played a large role in Marie's lack of play-ability. The jankery you need to include and draw in your deck to handle this weakness is absurd. If your lucky (scenario pending) you can handle this in the first 3-4 turns, if not...You're screwed.

. · 406
It is brutal. A lot of the time you wouldn't even want to try and get rid of him, because getting getting caught by the myths phase resets your progress. — Maseiken · 1 6/24/22
I think this guy feels a lot more dangerous than he actually is. It's actually surprisingly easy to get rid of him as Marie as long as there isn't a very tight agenda, and a single of her elder signs is basically an instant discard. Once you have a charisma or two there's no risk of him booting out important allies, and the damage thing might mean you have to leave a partner for a turn and maybe pack a little soak, not much more. It's understandable that he's intimidating, and he's definitely not in the category of free weaknesses, but I've had a lot more trouble with weaknesses that initially seemed tamer. — SSW · 190 6/24/22
"If you spend 3xp, he sometimes isn't bad" — MrGoldbee · 1314 6/24/22
That's the catch with dealing with him. When we look at other investigators, I'll use my two favourite, Luke & Finn, their weaknesses become non-issues with 3xp. 3xp to only deal with ONE PART of the weakness is brutal. Also makes certain scenario's devastating. Another tech you can bring to counter this is The elder sign commit. so for 8xp and good draws, you can destroy this weakness, but that's a LOT to commit to it. — Zumi · 33 6/24/22
No weaknesses are truly devastating if you carefully plan for ways that deal with them. But, yes, for me Mr. Samedi is the most depressing personal weakness in the game. He makes you second thought before picking Marie and he makes her a character not for beginners to play with. Second to Samedi, I would say it would be Ursula Downs's weakness; it itself is not super powerful but simply eternally annoying and doesn't goes away, although Ursula is such a delightful investigator to play. Agnes Baker's weakness should also be at the top of the list; it's just that Agnes' super power is so damn strong that even her Dark Memory can't match up with it. — liwl0115 · 36 6/24/22
He's actually more helpful than not if you play with only Arcane Initiates and David Renfield (and no Charisma). One more way to kill them off before their doom becomes an issue, and Samedi allows you to add doom on demand to activate Marie's ability, and leaves before it becomes an issue unless you tempt fate when Ancient Evils is in the encounter deck. Mystifying Song also helps with getting that third doom on him safely if the agenda is tight. Of course, it could be argued that the actual weakness then shifts to you not being able to build a deck with non-expendable allies... All in all, I found Marie to be quite strong back in the day due to being able to use her intellect, seeker cards and hand slots to investigate, and her usual mystic suite for combat and utility. The doom jank is just icing on the cake. Now that Gloria and Norman have muscled in on that niche, Marie arguably isn't the best option for that approach anymore though. — Sorden · 1 6/24/22
Mystic also has some tools to offset the baron's challenges, like ward of protection to cancel bad timed ancient evil, deny existence to avoid damage, Ethereal Form so you dont take OAs,... — Django · 4420 6/25/22