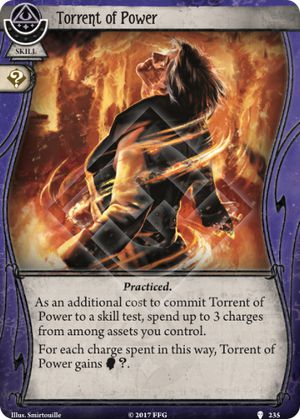 Let's review a bit what Torrent of Power of power does:

Contrary to the above review, I believe that this card does not justifies the inclusion of fringe spells. Fringe spells were that way because they range from bad to barely average. Now, combining these spells with Torrent of Power sure is a combo, but not a particularly impressive one. Say that you add Alchemical Transmutation to your deck in hope to spend your charges on Torrent of Power: even if you happen to draw both at the same time, it is unlikely that you will need to spend all the charges just for a particular skill test, and will be left on the board with a useless Alchemical Transmutation. In other words, you will have drafted into your deck Torrent of Power (maybe instead of Unexpected Courage) and Alchemical Transmutation (instead of any card that is actually good) just to get a single boost on a single test. And if you don't draw them at the same time, they are actually useless. Worse, Alchemical Transmutation could just be sitting here, clogging you arcane slots (and if you are running Sign Magick for the sole reason of using Torrent of Power, you now have 1 additional card to find to get your combo going, and the price of this card is added to the price of the combo)! Cards that are bad alone are rarely good when put together, and when the combined use is not particularly strong it is just better to skip these cards.

Besides, the fact that you have to spend charges from an asset also means that you are essentially paying to power up Torrent of Power. If you use a charge from Rite of Seeking, you are using one third of the charges of a spell that costed 1 card / 4 resources / 1 action to play, or in other word you are paying an additional cost of 0.3 card / 1.3 resources / 0.3 action to get an additional boost. Compare this to Unexpected Courage that would additionally cost you 0 card / 0 resource / 0 action to provide you with a boost, only missing out a sole icon that may not even be relevant to the test you are trying to pass - not a great deal. On top of that you are now out of one charge on your Rite of Seeking, and Mystics don't like being out of charges on their spells because that's what they use for most of their skill tests, and are essentially sitting ducks without their them.

So, is Torrent of Power that bad? No, but it's situational, and has to be played correctly. It is best used on assets with charges that are situational but good (meaning that you probably have charges to spare), cheap and have a lot of charges (meaning that spending a charge is overall less expensive), like Clarity of Mind (3), Mists of R'lyeh, and Grotesque Statue (though this last one rarely has too many charges). So instead of playing bad cards and hope to get a value from them through Torrent of Power, you are now playing good cards that you can use to power up Torrent of Power without feeling that you have weakened your deck or that you have to wait for an incredibly difficult test to spend 3 charges to make it worth.

As for specific investigators, Torrent of Power gets better in an Akachi Onyele decks who has additional charges to spare and Spirit-Speaker for even more charges. It is also probably better in investigators decks that could use huge boosts due to their low base willpower (meaning that they would get more flexibility at using more charges), such as Carolyn Fern or Daisy Walker, tough it will be in tough competition for a deck slot as these investigators' job is not primarily to use Mystics spells and may simply not run enough of them. It may also be reasonable for investigators who use spells with a 4 base willpower, including most Mystics or Sefina Rousseau, but I'd probably skip this on Agnes Baker who don't really need such a boost due to her 5 base willpower.

In the end, I believe Torrent of Power is neither good nor bad, but mainly depends on your deck building which should probably include at least 3 different assets with charges to ensure a good versatility. if you want to draft this card, you should probably take the time to consider Guts and Unexpected Courage as well. Maybe you're going to end up running all three, maybe you're going to end up running none, but you should really weight your options depending on where your deck is going.

Alleria · 68
Enchanted Blade also uses charges. Again, in the lvl0 version these are limited and you probably wouldn't want to spend them unless you absolutely have to, but it's another non-marginal source to tap from if need be. I've been playing Akachi with Enchanted Blade(3) a fair bit lately. It hits the board with 5 charges when she uses it, and it's mostly there for either swinging at 1 health enemies without spending a charge or powering up for a 2 charge, 3 damage hit. Either way you have at least 1 'spare' charge from it, or 3 if you like while still leaving room for one big shot later in the game. — Sassenach · 114 6/17/19
Two things : — Okami · 21 6/18/19
1) With Akachi, Song of the Dead comes with 6 charges (and can be usefull to deal with Angered Spirits anyway). 2) Torrent of power can be used to help your teammates against tricky teacheries, a +7 Willpower bonus may save their lives. It happens to me on the first game. — Okami · 21 6/18/19
Sassenach - Enchanted Blade is indeed a good candidate for fueling Torrent of Power, though this is mostly relevant for Akashi, who's probably the best investigator for using Torrent of Power regardless. - - - Okami - Song of the Dead is one of these fringe, sub-par spells that you're probably better off not drafting at all (except maybe if you go for some weird skull token strategy with Jim idk). Besides, my group has ran Akashi for 2 campaigns and feeding Angered Spirit has never been an issue, so I'd advise against drafting al (sub-par) spell for the sole purpose of getting rid of it. — Alleria · 68 6/23/19
3

Torrent of Power is a tricky card to play well. A single wild icon on a skill is not very good, so you're really looking for ways to reliably turn this thing into 3 or even 5 icons. The problem is most Mystics don't need to be up by all that much, and spell charges tend to be quite expensive to replace. Mystics as a whole have a tendency to rely heavily on assets or events, as skill cards are much less flexible when you rely so heavily on a single stat () to do anything. Events like Spectral Razor and spell assets like Shrivelling for example are often way too good not to include, so skills like Torrent tend to get left behind for other skills that increase consistency. Compare this card to say Guts which draws you back a card and costs nothing to commit for 2 icons, which is pretty much a sweet spot for spell casters, or Fearless which can be used on more certain tests for horror healing, something that Agnes Baker in particular appreciates (but all Mystics can benefit from). Overall, it's a card that understandably sees very limited play in Mystics- Akachi Onyele can benefit from it okay with her better charge economy, and recent addition Twila Katherine Price may make the cost of expending spell charges lower to warrant this card as a more common include.

The reason I'm writing this review, however, is to tell you about one particular use of this card that just has me absolutely floored, and it's one that I've seen almost no one talk about or try yet.

So let's look again at Torrent's biggest problems. 1. It's a skill card that doesn't give a nice utility effect (such as card economy) that Mystics tend to require from including skills over assets/events 2. charges are expensive because it's unlikely you'll be able to replace that Shrivelling or Rite of Seeking fast enough to warrant spending 1 or 2 charges to make Torrent good, and 3. the icons aren't necessarily wanted anyway. What we require then is someone who doesn't care as much about economy cards, for whom tossing charges is a relatively low cost, and for whom the icons- even possibly just for wild icons on non-Willpower tests- are super valuable.

Let me introduce you to Patrice Hathaway.

Patrice draws through her deck quite fast, so spells can be replaced very quickly. The combination of Patrice's Violin and Madame Labranche makes paying for spells surprisingly easy, particularly the already low costed Mists of R'lyeh. She is someone, in my experience, who can fully benefit from torrent even just for icons, spending 2 or 3 charges she no longer needs on any test to put herself up by 3 or 4. In fact, Patrice is so flexible with her event draws and ability to test insanely high that I often find myself not needing to rely on the spells as much, and spells sit around with extra charges. Torrent of Power is, take my word for it, a fantastic Patrice pick. Give it a try!

Torrent of Power single handedly justifies the inclusion of spells that HAD been very fringe prior to its release.

This card lets you turn those slots that had been inefficient into a bank for these cards.

This card is particularly good because it is modular. You CAN spend an extra charge off of your key spells (Shrivelling and ROS) to get a slightly more powerful Unexpected Courage, but it really doesn't do this card justice.

No, to get the most out of it, you will have to play some other spell and let it sit out as a bank for this card so you have the potential to just blow a key test out completely.

This card is also fantastic on higher difficulties as you can reliably spend up to what you need for those key tests.

I would consider this card in most Mystics, but it will require that you include a third spell into your builds aside from Rite of Seeking and Shrivelling in order to really get the most out of it.