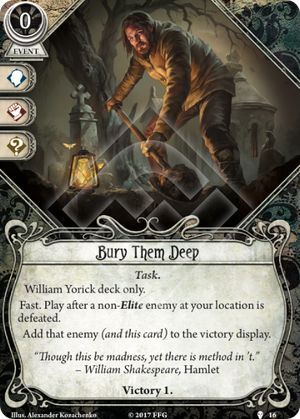 A+. 10/10. Literally the best signature event in the game. Quickly searches up all the signature events to confirm. Yeah, I'm right. It's the best one. Honorable mention to Obscure Studies and Dark Insight, but I do believe Bury Them Deep bests them.

Why is this card so good? I'll tell you. First off, ignore the icons. You will never commit this, period. It's too valuable. At the end of the day, you might fail that test you considered committing this, and that test might fail a scenario, but as long as you manage to kill a Swarm of Rats before things end, you've at least got a VP to show for it. You will kill something nasty, Bury it Deep, and it'll just chill in the victory display like a trophy, knowing that, no matter how bad the scenario goes from there, you got something out of it.

And yeah, that's really satisfying. But let's think about that application. Any non-Elite enemy gets added to the Victory Display, as long as you kill it once with this card in hand. That's incredible. You might think "well now, non-Elite is a pretty hefty restriction since all the really annoying things are Elite", and that's where you'd be dead wrong. This game is full of stupidly annoying enemies that, for some reason, are not Elite and don't have victory on them, meaning you can often encounter them multiple times a scenario (especially if you get a reshuffle). Here are a few, spoilers of course at your discretion:

I bet you thought at least some of those were Elite, didn't you? There are plenty more, but I think I've made my point. This card is just amazing. Enjoy the victory, enjoy the slightly safer travels.

StyxTBeuford · 12621
Or a mind blanked Brood of Yog-Sothoth. +2 VP for one damage! — MrGoldbee · 1174 11/17/20
I'm with in that this card is awesome! Any card that gets me that sweet sweet XP is worth a double take for me. However, I don't know if I would consider the best for two reasons. The first is that pinning an annoying enemy to the victory display isn't terrifically useful unless you're playing 3+ players. Also, enemies that return from the victory display (vengeance) still return. You still get the VP (I think), but not everyone gets buried as deep as they could be. Second, while it's great the VP is gifted to the entire party, Survivors have the lowest need for VP. That is changing as the card pool grows, but still. — LaRoix · 1529 11/17/20
I certainly enjoyed Bury them Deep during my recent Chainsaw Yorick rampage, but there were a few times it just didn't fire. If you draw it late, you may not have time to kill an enemy that fits its conditions, and in one case, I drew it early but got hit my a Treachery that I couldn't let fire and had to throw it for the icons. However, it is very good. A lot of recent campaigns have you shuffling the discard pile into the Encounter deck with most Agenda (aned even most Act) flips, so even in 2 player, you risk seeing enemies again. I would put this in the "Among the signitures I am happiest to see" category. — LivefromBenefitSt · 843 11/17/20
Live said it best there- recurring enemies more recently have become an issue. I will say from my own experience, as someone who plays primarily two handed, that I very much do feel the effects of the enemy being taken out of the deck. "Road less traveled" and all that, but on average you definitely expect this to make your games safer. I also personally disagree that Survivors have no need for XP. Chainsaws are 4 XP a piece! Survivors have exile cards to spend on as well, and those cards- particularly Test of Will and Flare- are still incredibly powerful. — StyxTBeuford · 12621 11/17/20
*has more recently become an issue. I can't grammar good today. — StyxTBeuford · 12621 11/17/20
Huh! Well spotted, I'd never considered the lock-out-of-reshuffle effect this has. As the only restriction is "Non-Elite", it seems that means this would work on Weakness-Enemies, and be a great synergy with recursion decks. Patrice Hathaway is the immediate example; by default she's 1. high recursion, and 2. has a weakness enemy that is 3. non-elite. — HanoverFist · 455 11/30/20