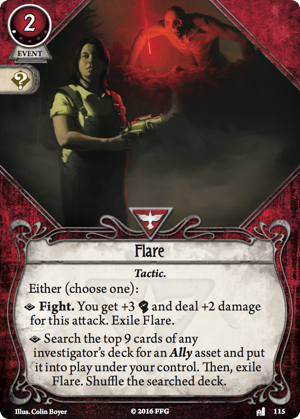 Why are cards called Flare in FFG LCGs always really strong? An event that can tutor, or make a strong attack, that even has a wild symbol for extra gravy, and all for just 1 XP! This will never be a dead card in your deck.

The tutor effect on Flare does indeed seem wonderful on paper, replacing the cost of the ally you search for with the 2 resources paid to play the event, provided you don't whiff. And do try not to whiff into Baron Samedi!

Poaching a fellow investigator's unique ally might seem like a mean thing to do but paying just 2 resources for Leo De Luca is good for the group as a whole no matter who ends up with it. If you are playing as the designated survivor and are teamed with a guardian, then it can also be beneficial to borrow that extra copy of Beat Cop, and the synergy with Teamwork should be obvious.

Speaking of synergy, this is yet another card that is going to work even better with the soon-to-be-released Charisma. We might start to see Aquinnah creeping into some decks alongside Peter in the near future, and this will mean that survivors like Ashcan will actually want to be lead investigator and collect and dig for some of those meaty storyline allies.

There are currently only three investigators that can purchase Flare, each having a different use for it.

Agnes Baker probably actually gets the best of it. The 5 attack for 3 damage will rival her Shrivelling (and Song of the Dead), letting her easily blow up those inconvenient Silver Twilight Acolyte that she otherwise had difficulty against. She can also use Scrying to check an ideal time to use the tutor, either on her own deck or another's, and she sometimes like to run Arcane Initiate or Peter Sylvestre regardless.

Wendy Adams likes events, and she can discard it for a check then play it later using Wendy's Amulet (the exile really isn't a problem because if you're low on cards then you likely don't have allies in your deck to search). However there are better options among the rogue cards for her to use to fight.

"Ashcan" Pete loves allies in general to help soak damage and horror, and also makes impressive use of anything that works as a backup to Duke for the option for a strong third attack in a turn. Between this and Hard Knocks he can fully expect to be able to dish out 7 damage in a nova turn.

So if you find yourself lost in the dark without any friends, go get your 80s disco flares on!

The_Wall · 252
Worth mentioning that, with the exile keyword, all the good stuff flare does comes at a price though. — Heyenzzz · 4853 2/26/17
Does Flare get exiled if you choose to dig for an ally and fail to find one? I've heard some other people say it does not get exiled, but I fail to see how that would be true. The 'Then, exile Flare.' part does not seem to care about that. — Darthcaboose · 238 3/15/17
Darthcaboose: "Then" has a special definition in the rules. Essentially, its shorthand for "If the preceeding text was successfully resolved, then...". See https://arkhamdb.com/rules#Then — lunaticcalm · 1 3/24/17
Of note, Baron Samedi does not have the *Ally* trait, so Flare can’t find him. — Death by Chocolate · 1170 6/18/20
0

Maybe this is not the worst card in the game. Maybe it is. Maybe it's genius. Selling your soul: 1xp per success is certainly in line with the ethos of this game. Tactically, you have to ask yourself: Are the benefits of this card worth 1XP per session? Maybe it is! Feels a little dirty doesn't it? That's Arkham.

Pro: It is a nice single use attack with sweet bonuses or around a 40% chance [depending on the size of your draw deck] to draw an ally - very tempting.

CON: It costs 1XP per success due to Exile.

EXILE - During campaign play, a card that has been exiled must be purchased again with experience points (between scenarios) if you wish to re-include it in your deck. If exiling 1 or more cards would reduce your deck below your investigator's deck size, when purchasing cards between scenarios, you must purchase cards so that a legal deck size is maintained (when purchasing cards in this manner, you may purchase level 0 cards for 0 experience cost until a legal deck size is reached).

Lotharun · 1
I don't think Flare is anywhere in contention for worst card in the game. It's pretty solid because searching for allies and not having to pay for them is very very strong, especially with higher level allies. — StyxTBeuford · 12720 8/24/21
With Deja Vu it doesn't cost anything (nearly). — bugiel_marek · 1 8/24/21
2$ for a friend's Leo de Luca OR a big attack? — MrGoldbee · 1248 8/24/21
@bugiel_marek Good point! But yeah - deja Vu itself is 5xp, so that's something else to consider for value. If you create an exile deck and build around Deja Vu, then I could see that working nicely. I think that's point with DeJa Vu. Me, I was looking for a way to get an Ally quickly into Agnes' hand and she does not have access to Deja Vu. — Lotharun · 1 8/24/21
Flare is easily the best of the exile set. If you want to look at maybe the worst card in the game, check out the fire extinguisher. — SSW · 180 8/25/21
Lotharun: You may already know this but since you said "draw" twice (once in your review & once in your reply), just in case you didn't realize: Flare says "Put into play". You're not just drawing! You search, draw, and put into play for NO additional cost, all as part of using the Flare. That's the beauty of it- you didn't only just find Leo De Luca or Agency Backup- you also got them into play for a cheap 2R. — HanoverFist · 523 9/10/21
Can I play Flare and refuse to take the ally I have drawn and just discard Flare? For example - I have 2 copies - Peter Sylvestre and 2 copies of Leo De Luca, and from the start I came and I played Peter Sylvestre, and now I'm looking for Leo De Luca using Flare, but I find the 2nd copy of Peter Sylvestre, so I have to take Peter and replace him, and expel Flare? I would like to skip the 2nd copy of the same ally so as not to exile Flare, and be able to play it another time. — LTT · 1 4/6/22