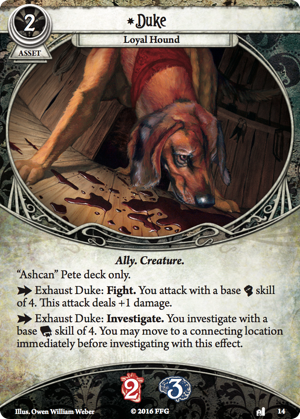 Duke is a good doggie. An issue I have found is that investigator specific cards only being a one per deck means that the likely hood of drawing even after a hard mulligan is low. Duke mitigates this by starting in play.

The obvious points here is that Duke shores up "Ashcan" Pete's weaknesses, books and fists. However the best part of Duke is his fetch ability, moving then investigating. This action economy is increadibly useful, especially in solo play.

Solo play is where Duke and "Ashcan" Pete thrive. As noted he starts in play so "Ashcan" Pete is ready to roll turn one as you don't have time to get set up playing solo.

Get out there and play fetch!

Pilgrim · 262
When "using" Duke, his actions replace pete's base skills, but he still affected by permanent bonuses and penalties, like holy rosary? — Django · 2380 2/8/17
@Django: Ayup. Anything that modifies your 'base' skill effectively overwrites whatever is printed on the top of your investigator card. Bonuses penalties, and modifiers then work off of that new base number. — Darthcaboose · 117 2/21/17
Best part about Duke IMHO is that he starts *in play* - so Pete always starts with a free +1 damage weapon, making him very consistent in the early game. Compare to other investigators unique cards - they are 1 of (so you can't rely on even seeing them in an average game) and have to be drawn, played and payed for. Duke is awesome. Whosagoodboyyesyouare. — waferthinninja · 19 4/11/17
A note about Duke as an "Ally" in case anyone else is confused (as I was): Duke has the Ally keywords, but not the Ally *symbol*. Practically speaking, this means that you can have another ally in addition to Duke. — micahwedemeyer · 40 4/12/18
A very important thing to note, Duke is a bloodhound. — Andronikus · 1 5/20/19
4

Duke is a good dog. No body is going to kill my Duke! Duke and Guard Dog are friends, and I have two dogs! Don't put any damage on Duke or Guard dog on my watch! They are good doggies. They are very brave. I love Duke!