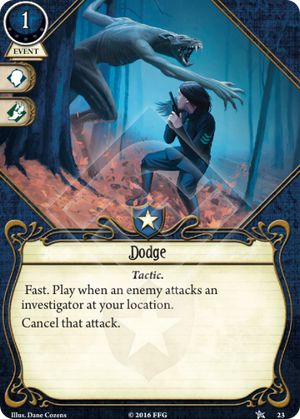 Update after the release of Path To Carcosa:

Dodge is such a great card, why did nobody bother to write a review about it yet? I fancy that stressing it's obvious power must sound moronic, and no one wants to read what he/she already knows.

So i will just put other cards with the same effect from the other factions into advisement, none of them reaching Dodge's potential:

Synisill · 748
Shortcut's not really an apt comparison, as it won't cancel an attack or disengage the investigator from an enemy engaged with him/her. An engaged enemy, will follow the investigator through the shortcut. It just won't get an attack of opportunity, since Shortcut is Fast. — Herumen · 1615 10/2/17
Thank you, Herumen, i edited my review accordingly! — Synisill · 748 10/3/17
yeah, Dodge is a really good card, especially considering that guardians usually can't evade enemies (also it's actionless, unlike an evade). i have never been disappointed that i took this. — Zinjanthropus · 185 6/1/20
7

I thought I'd write up a review of this old card, since I've seen widely varying opinions as to how useful Dodge actually is. My own evaluation of it has changed quite a bit over the years.

Dodge was well-received when it first came out. It's really nice that this card is cheap and reliable, that it works even against Elite enemies, and that it can help other investigators at your location. It compared well to the clunky and awful healing options that existed back then. It still compares well to the more expensive versions of this effect we've seen printed since.

Even so, my opinion of this card has really come down over the years. Nowadays, I almost never include this card unless I'm playing Diana Stanley.

The problem with Dodge is that it's situational, relatively low-impact, and grants an effect which can be covered by less-situational cards.

For starters, this is not good enemy management. You might see a newer player include this in, say, solo Rex to "handle enemies," but this is not a good idea. If you have an enemy on you that you can't deal with, Dodge is not the card you want to have in your hand--it will only Delay the Inevitable and offers no permanent solution. After you Dodge, you will be in the same bad situation as before, now down a card and resource.

Of course, if there's a strong enemy you can only kill over multiple turns, Dodge can help you (or an ally) avoid some damage in the meantime. But I've found this to be surprisingly uncommon. Unless you're running a build in which you're trying to get attacked with stuff like Guard Dog (and such a build certainly does not need Dodge), you're just not going to take a ton of attacks from enemies in this game. Most of the time, a properly-built Guardian should be able to clear enemies from the board or comfortably tank their attacks. Either way, you don't really need Dodge. It does serve as a failsafe in case things go wrong, like drawing the autofail against a Retaliate enemy--but that's not something you have to dedicate a card slot to. You can usually just tank the occasional hit from such things every once in a while. Most enemy attacks deal 2 or fewer combined damage and horror, anyway.

Furthermore, Dodge faces a lot of competition nowadays from healing cards that are actually good, like Hallowed Mirror. Healing effects address a lot of the same concerns as Dodge, but are quite a bit more flexible because they can help not only with damage and horror from enemy attacks, but with damage and horror from treacheries and locations (a much more significant threat in most scenarios.)

Yes, Dodge will on occasion have some very good moments (often involving Ancient One enemies). But is it worth lugging this card in your deck just for that? I don't think so.

So, all these considerations mean I've moved away from running Dodge in my Guardians, and I haven't missed it. The minor synergies that have been printed over the years, like Counterpunch, don't really move the needle for me.

But a final note on Diana Stanley, with whom I do tend to run this card. If you're trying to quickly increase her Willpower to cast spells (which is my preferred way to play Diana), then you need a high density of cancels in your deck. Dodge is more situational than I'd like, but at least it's cheap, and sometimes you or a teammate can deliberately provoke an attack of opportunity to enable it. I prefer it to really expensive cancels like Hypnotic Gaze or Hand of Fate, or unreliable cancels like Eldritch Inspiration, Defiance, and Read the Signs. But I see Dodge as a necessary evil in her deck, not something I actively want for its own sake.