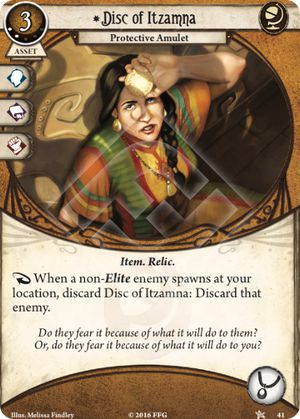 Just want to make a few quick points here. First, I think this card is somewhat underappreciated. Three resources, a card, and an action to automatically dispose of a Hunting Nightgaunt or Conglomeration of Spheres is a great deal. It's a shame that this is a Seeker card, because Seekers have some of the most valuable resources and actions in the game. If this were a Rogue card, it would be much better. Still, there's nice value here.

Remember that reaction triggers are optional (so you don't have to throw away your Disc if you draw Swarm of Rats), and that you can use this to discard a teammate's draw (provided you're at their location, which you should always try to be), so getting good value out of this is pretty easy. Unlike something like Tooth of Eztli, you can get full value out of the Disc even if you draw it in the mid-to-late game.

There's a nice interaction with Scavenging. I don't really recommend this for Rex (he has far, far better things to do with his actions and money), but I think this is a pretty reasonable build for Minh.

Finally, this card gets much better in the Forgotten Age campaign. Ordinarily, the fact that this card discards rather than defeats the enemy is a drawback. That means it doesn't add victory enemies to the victory display, reducing the number of attractive targets. In Forgotten Age, though, Disc of Itzamna is an outstanding response to big Vengeance enemies like Boa Constrictor.

CaiusDrewart · 2815
Excellent review, the optional part was a good thing to remember! The interaction with scavenging can be completed by cornered too! — mogwen · 250 9/4/18
This card gets better if you‘re a guardian with „on the hunt“ or „let me handle this“. Alternatively such a player could be at your location instead. — Django · 4420 9/4/18
Can you use the Disc of Itzamna to get rid of The Thing That Follows without shuffling it back in your deck? It seems so, since the enemy is discarded and not defeated... — Iluvatar · 1 10/1/18
The scenario would have to have only one location, since otherwise The Thing That Follows would spawn elsewhere. — Katsue · 9 12/16/18
It will hardly help with the thing that follow, because that enemy doesn't spawn engaged with the bearer, it spawns in the furthest location away from he bearer. So someone with Disc of Itzmana should be at the opposite side of the map in relation to someone with the thing that follow at the very time they draw it from their deck. That's a very unlikely scenario, but yeah in that case you would be able to discard it. — Killbray · 6127 10/9/19
9

I didn't think too much of Disc of Itzamna when I first considered its use in Daisy Walker & Roland Banks decks. Let's look at its upsides: First, it has 3 resource icons, giving it a lot of flexibility when used for skill tests. Second, it discards an enemy, meaning you probably won't encounter it again until the Encounter Deck recycles (though you also won't get its Victory Points, if any). Third, it can discard any non-Elite enemy spawning at your location, even if it another investigator draws that enemy. Fourth, its 2XP cost is not exorbitant and means Roland Banks can use it, too. Lastly, it uses the Accessory slot, which is, at present, under-used for Seekers & Roland.

Now for its downsides: First, it only works on a non-Elite enemy. Okay, not a big deal; it'll still work on most enemies you're likely to confront. Second, it only works when that enemy spawns at your location, so it can't be used on an enemy already in play or that moves into your location. Third, it is discarded when used. This seems to me to be its largest liability since, although its effect is good, its cost of 3 resources seems high for a one-shot item. Now, if it had charges...

For Seekers, who do not typically excel at fighting, Disc of Itzamna is a good option to remove an enemy. And, since Seekers are often in a support role, it's nice that it can affect any enemy spawning at your location, thus protecting the entire party. On the whole, though, I had pretty much decided that Disc of Itzamna was not generally worth leveling-up for. Maybe if it could be recycled with Scavenging but, unfortunately, neither Daisy Walker nor Roland Banks have access to that card.

Then, along comes Rex Murphy. Rex can use Scavenging and, given his investigative bent and his 4 , he can probably use it often and successfully. Now, you can almost always have one copy of Disc of Itzamna in-play and ready for use, especially with 2 copies of the Disc in your deck (though only 1 copy can be in play at any given time, since it's unique). Granted, re-playing it over and over can become expensive at 3 resources each time. But, with Dr. Milan Christopher and lots of investigating, Rex should be able to consistently gain resources. You could also consider giving him Burglary as one of his off-class cards.

Of course, Disc of Itzamna can also be used for its skill icons at no cost. With 2 copies in his deck, Rex can play one to have it ready to use for its effect, when needed, and use the second to aid a skill test with any of its 3 icons. No matter how Disc of Itzamna is used, Scavenging (consider including 2 copies) can continuously recycle it, providing Rex with consistent enemy control and skill test boosting. And, since one of those icons is , it can contribute to its own recycling by boosting investigation skill tests and, thus, helping to trigger Scavenging.

It just goes to show how new cards can give new life to old ones (er... cards, that is, not Old Ones). One of the great things about the LCG format.