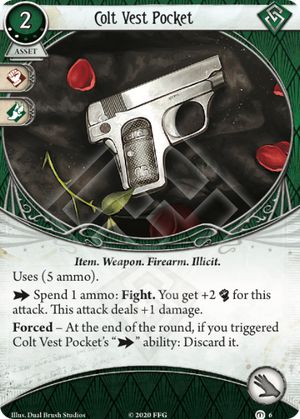 What a truly fantastic upgrade to the original Colt Vest Pocket! The level zero Colt Vest Pocket was always held back first and foremost by its need to be put into play on the same turn you intended to use it, which relegated its use to being put into play by cards like Joey "The Rat" Vigil, Sleight of Hand, or Fence. If you spent an action to play it, you would typically only have two left to fight with it, not to mention the fact that doing so could trigger an attack of opportunity. For the level two version, you can play the Colt Vest Pocket the same way you do most weapons: on any turn where you have an action to spare to prepare you for future enemy cards. The +2 combat is welcome too for a faction filled with 3 combat investigators who likely want to spend at least some time fighting enemies. However, I remain unconvinced that this gun - even in its upgraded form here - has a place at most Arkham Horror tables.

There is still some difficulty in taking full advantage of the Colt Vest Pocket. You still only have one round in which to use its 5 ammo. Rogues are obviously the class for extending a turn with additional actions (Leo De Luca, Quick Thinking, Haste...) so it is plausible you could play this and spend four or even five actions fighting with it on a future turn, but then there just aren't that many enemies with that much health! One thing you can do if you are playing Leo Anderson, "Skids" O'Toole, Tony Morgan, or Jenny Barnes is play "Eat Lead!" to shore up one of your attacks, and of course the ammunition from the Colt Vest Pocket is much more expendable than that from other guns. "Skids" and Tony get extra actions to shoot the new Colt, and Jenny's Twin .45s can also end up with plenty of ammo, so I think for these three investigators who can also take "Eat Lead!", this is a convincing enough combo to be worth considering. As for other cards that grant additional actions, I think Haste is going to be the most effective card at extending the gun's reach because the Colt highly incentivises taking multiple actions of the same type in a single turn, so they're a natural pair.

So: the level two Colt Vest Pocket is most at home in an investigator with actions to spare who can spend its ammo either taking on something with a large health pool, or for fighting lots of enemies at once in a round where another gun might run dry. The former is going to be campaign or scenario dependent, but you can make the latter more likely by playing with more players. The problem is that this role is traditionally filled by higher level weapons that do more damage per shot than the Colt Vest Pocket, such as the Chicago Typewriter or the new Beretta M1918. This is typically considered better than spending more actions fighting for less damage because you take fewer skill tests, each of which comes with a chance for things to go wrong with a failure. The Colt is half the experience cost of each of those big guns, but then if you are supporting it with other cards with levels highter than zero, such as Haste, you could have just purchased a bigger gun and had fewer pieces to assemble! Now, this isn't necessarily an either/or, as many particularly fighty investigators, such as Tony Morgan, are going to want plenty of weapons, but it bears thinking about how you might spend your experience most efficiently.

I think for now this is going to be a pretty niche pick, but this is certainly a much more broadly playable card than its level 0 variant. Perhaps in future there will be a scenario where a large enough party of investigators are guaranteed to draw multiple two health enemies in a single round, and the Colt Vest Pocket (and the .45 Thompson) will be likely to outperform the higher level Rogue guns. Until then, this is a reasonable if a bit wonky sidearm you might take if you want a particularly high density of weapons.

Trinity_ · 170
I'd take switchblade 2 and never care about ammo or discarding your weapon. — Django · 3498 8/13/20
I think safeguard is maybe another good card for extending the colt's reach. In a scenario with Dark Cult or the Forgotten Age doom-cultists or w/e, someone could escort Skids/Leo round the map and they could gather up little enemies as they went. Then they could kill them all with the colt on their actual turn. It's another way of accumulating lots of health worth of enemies in place, and of course, Safeguard is generally a great card so you're not necessarily buying it just to support the colt... — bee123 · 24 8/13/20
This upgrade wont get played for several reasons. If you’re running the OG colt and upgrading to this, the initial play action hardly mattered- you likely just Sleight of Handed most of your Colt plays anyway, so a deck that runs this likely also has Sleight of Hand. For 2XP you get a very measly combat boost and the ability to play it ahead of time, which is much less nice than just spending a bit more XP on a good Rogue weapon like Lupara, Baretta, or Switch 2 (without taboo it’s the same cost). If I’m taking OG Colt- and I still do sometimes- Id much sooner upgrade it into Lupara for Sleight shenanigans. — StyxTBeuford · 12435 8/13/20
Another good card to combo with this is Borrowed Time. You could play the Colt, then stockpile your other two actions and unleash hell the following turn (or whenever you need to). You have 5 shots, but you'll probably only need to generate 2 extra actions to spend them all, which isn't hard. I think it's probably best to think of this gun as a cheap way to take down pretty much any enemy. 10 damage (maybe a little less if you miss a shot) is nothing to sneeze at. It's the maximum you'd get out of a shotgun for instance (and getting all 10 is dicey). Yes, you can't restock the ammo as easily, but there really shouldn't be much else to fight after this onslaught. Don't forget it's one hand slot so you can bring a backup. — LaRoix · 1447 8/13/20
The problem is all of that is true of the original CVP. The only two things you get here are a slight boost in hit chance and the ability to play it ahead of time. It’s still a weapon specifically designed for a long turn onslaught, and the ability to save the play action (and a possible AoO) by playing this earlier is not really a meaningful difference for the decks that would play the original. For a backup Rogue weapon, just take Switchblade. For a burst weapon, Lupara hits harder in less shots and is easier to play around. — StyxTBeuford · 12435 8/13/20
I generally agree with Styx here: it's neat, but it's in a spot that makes it hard to justify. I'm hoping that if guardians get an XP-cheat card (a la Arcane Research/Shrewd Analysis/Deja Vu), it allows them to upgrade guns more cheaply, making some of the sillier guns more legitimate picks (although this would only matter for Leo). — SGPrometheus · 514 8/14/20
If its low level (a la Arcane Research/Shrewd Analysis) it would also be useful for Skids and Lola (and Jenny if you're willing to use a flex slot on it). — Death by Chocolate · 742 8/14/20
It combos pretty well with Warning Shot, though you probably shouldn't take it just for that. I also think the idea of a Scavenging/Joey the Rat Vigil/CVP combo deck would be interesting (if probably bad). Free internet points to the first person to build that. Might as well throw Warning Shot and Eat Lead in for extra jank. — Zinjanthropus · 161 8/16/20
I agree that this card is niche, but aren't most of the Return set cards? The +2 boost compared to +1 is huge for 3 combat investigators like Finn and Jenny. If you're Finn and planning to always evade first, it's a really nice solution to the occasional hunter. Comparably, Switchblade 2 is unlikely to give consistent 2 damage for anyone but Tony without a lot of support and Switchblade 0 isn't good for much more than an early campaign placeholder for 3 combat gators. The ability to play it beforehand is just a little insurance in case you don't draw your Fence or already used your Sleights of Hand. It's niche for sure and little good for Tony but I'm glad it exists and would take it over Switchblade 2 for a Fencing Finn or Jenny. — housh · 103 9/26/20