Mythe
Acte. Stage 1
Clues: –
"We all hed to take the Oath o' Dagon, an' later on they was secon' an' third Oaths that some of us took." - H. P. Lovecraft, The Shadow over Innsmouth

Each Suspect enemy gets +1 health, loses aloof, and cannot be parleyed with.

Spend the blue, red, white, or yellow key: Discard each Obstacle card attached to your location.

Objective - If each surviving investigator is at Grand Entryway and the investigators have "unlocked the entrance to the caves," advance. 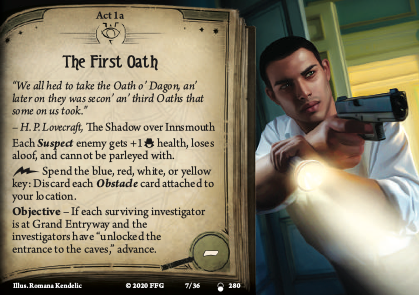 Acte
Each of the Order's chambers are devoted to an aspect of their grand scheme - the secret that lies at the foundation of the Order, the poison that dwells in the roots of Innsmouth - but whatever that secret is, it is just beyond your grasp. At least, until the moment you discover the truth behind the building itself: It is nothing but a cover for the Order's true headquarters. As you unlock the pathway that leads into the cavernous depths beneath the building, you wonder what secrets could possibly dwell below...

If a Suspect enemy is in play, remove it from the game.

Remove each location other than Grand Entryway from the game (or add them to the victory display if they have Victory X and no clues on them), discarding each card at those locations.

Shuffle the set-aside Tidal Tunnel locations and put each of them into play.

Increase the flood level of each location. 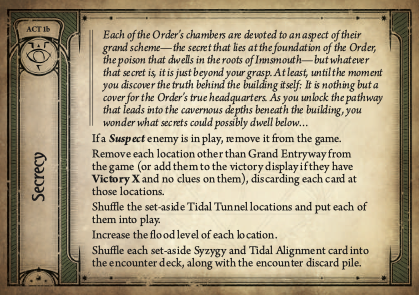 Thomas Dawson is really really strong. Like REALLY strong. So strong in fact, that he is able to go forward in time by 60 years and get his hands on a Glock 9mm. Isn't this supposed to be set in the 20's? How did nobody at FFG notice this?