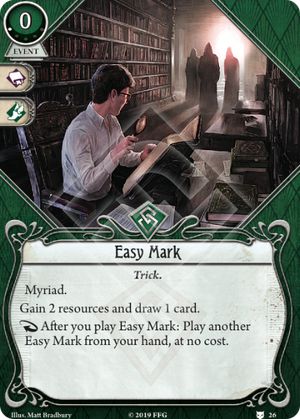 This is an interesting one. Absent the reaction ability it’s already very close in function to Emergency Cache but with a draw ability in place of one card.

Now the statistics are weighed against you if you’re trying to hold out for all three. Frankly you have even odds of even getting more than 1c in the first half of your deck, so that ability is quite unreliable. That’s mildly troublesome, as it means this is an economy card for the late game - generally when you want to be spending resources, not gaining them. The dream of getting all 3 is.... overly optimistic at best.

That being said a thin deck is a reliable deck. In addition this zero-cost economy card combos really well with certain recent additions to the Rogue pool. Double double makes even a single copy into a very potent card on its own, and crystallizer of dreams is happy to snap up extra icons for you.

I think it’s a good addition for an event rogue deck thats running double double and perhaps a bit sketchy outside. Probably pass on Sefina for whom it’s not a particularly high impact event, but slightly better for Tony, Skids, and Wendy.

Bonus points for anyone who get a Wendy deck to infinitely recur this for infinite cash.

Difrakt · 1000
How does Wendy infinitely recur this? Her Amulet puts it on the bottom of her deck (not discard) so it’s not a valid target for itself? That said, you could still play it three times from hand, drop Amulet, and play it three times from discard for a total 12 resources and 6 cards in three actions (minus Amulet cost). — Death by Chocolate · 742 10/1/19
If you get to the condition where your deck contains 1-2 easy marks, have Wendy’s amulet equipped, and one copy of easy mark in hand you can keep playing the marks as you draw them. It’s actually not as hard to set this up as it sounds, if you get to 1 card in deck and three easy marks in hand it is almost guaranteed to happen. — Difrakt · 1000 10/1/19
Okay, that’s fair. Run enough card draw to rip through your deck and then loop it. Nice. — Death by Chocolate · 742 10/1/19
Building a deck where I can have Easy Marks, Swift Reflexes and some Lucky!(2)s on the bottom of the deck I can have infinite actions! With Drawing Thin, Pickpocketing(2), Take Heart, Guts, Perception and Manual Dexterity to accelerate the combo. Seems pretty broken! :) — Venti · 1 10/15/20
Oh, that wouldn't work as infinite actions because I can only play Lucky! if I am failing a test. Please disconsider. — Venti · 1 10/16/20
3

If you are short of cash, XP and require significant set up this card can help you to pay for those core assets you desperatly need at a very cheep price (1XP for 3 copies). I have been testing this card in the 19XP enemy management decks (Leo A. and Rita Y.) that I will be taking to Arkham Nights 2019. In the context of stand alone mode where XP is very limited If you don't want more Weaknesses and multiplayer where you tend to have actions to spare (specially as the enemy manager) I would recommend this. On the other hand, If you have acces to Drawing Thin and ignore the updated Taboo List and/or if you alredy have Hot Streak in your deck, then you can definitely skip Easy Mark. Also the reaction effect is very sweet but is very unreliable so I rate this card considering that I will most likely be expending an action to play each copy of Easy Mark.

The more I use this card the more I make a mental note to include it in more decks, it just is incapable of under-performing, it has so many forms.

and my most recent damn moment.

"you need tons of commits and have a crystalizer of dreams in play already?" well how about this icon and the top card of your deck, with all the other bonuses you get from playing it.

O yea and there a line of text about being able to play it three times in a row or something, that's cool too I guess, but given you can play it fast with chuck who even needs that?

I've played a few decks with this card in them. They have value in decks that run Crystallizer of Dreams or event recursion (Sefina Rousseau, Wendy's Amulet). But outside of that, I'm underwhelmed. Usually I am most strapped for cash at the start of the scenario, where I need 10+ resources to get set up. Getting 2 resources and a card draw feels mediocre. When I don't need the money, I can choose to sit on this card until I draw more or really need the cash, but then it just feels mediocre again.

Maybe I'm playing this card inefficiently? Or maybe I'm expecting too much from it?
I see reviews from players that praise this card highly, making it sound like an almost auto-include for Rogues, and I'm not quite understanding the why. 2 resources and a card, vs 3 resources from Emergency Cache. If resources are what you need (which is what I usually need in my decks), then why is Easy Mark so "amazing"?

VanyelAshke · 140
This is an autoinclude for Rogues, or more specifically anyone with level 1 Rogue access, because it replaces itself and because it only costs 1 XP for all three copies. It is the most efficient economy card in Rogue. — StyxTBeuford · 12435 11/26/20
I also, for what it’s worth, do take Gry but never Investments or Lone Wolf (unless it’s a big money build). Hot Steak is fine for Sef. At level 0 econ you can take Faustian Bargain and Gry, but the appeal of Easy Mark is that it’s super action efficient because it replaces itself (and in an already draw heavy deck it becomes even better). Rogues have the second best draw of any class thanks to Lucky Cig Case. — StyxTBeuford · 12435 11/26/20
Oh, and I never take Pay Day, and I even wrote a review for it. Outside of a Borrowed Time deck, it’s very very bad. — StyxTBeuford · 12435 11/26/20
Agreed on Pay Day; Borrowed Time or some other shenanigans (Skids + Ace in the Hole) is the only place to consider Pay Day. For Easy Mark, I'll keep playing with it. Another "tender point" with the card is that it takes up 3 slots. Most decks are only 30 cards, and its hard enough pack everything you want into 30 cards. Now, you need to do the same in 29 cards. I am probably just under-evaluating Easy Mark. I'll keep playing it. — VanyelAshke · 140 11/26/20
Except it’s 3 slots that all replace themselves. You are making your deck tighter which is a major benefit. Mandy Thompson is considered incredibly powerful, but she gives you the deckbuilding choice of 30, 40, or 50 cards. All the most ridiculously OP Mandy decks opt for 30 cards because it makes it way easier to find your best cards sooner. Easy Mark is a small version of that, as is Three Aces from the same cycle. — StyxTBeuford · 12435 11/26/20
I don't follow why it is an autoinclude just because it replaces itself. You still need to spend an action to play it, so it feels like you need a deck that is able to reliably find more than 1 copy at a time. By that logic, wouldn't the whole set of Guts, Manual Dexterity, Perception and Overpower also be autoinclude since they replace themselves as well (with no action spent either)? — flamebreak · 18 1/29/21
@ flamebreak: I would say, the core cantrips are really strong, too. But you still need to pass a test with them. Still, I almost autoinclude "Guts" in mystics, "Perception" in seekers, and so on. "Easy Mark" replaces itself without a test. It also synergizes particularly well with the crystalliser and Chuck, who potentially makes the card fast even without the reaction trigger. (Unless you need his ability on another card this round.) — Susumu · 127 4/16/21
1

This can be slighly better than Emergency Cache (0) for Rogue. You got 1 more card to draw from your deck. Then Easy Mark (1) have 1 icon for Agilility and Intellect.